Hello, yes after 3 months it's time to get the ball rolling again, nasty virus that. Well that machine is still out of order but this new one is doing the business now and as it is somewhat faster converting goes much faster too, not that that ever was a bottleneck. Anyway these last months there was much distraction for a live sports lover like me, hardly a chance to get bored. One of the most amazing things i saw was a chinese swimmer without arms winning gold (dolphin style). China won the most medals at the paralympics and totally out classed the USA. I'm afraid this shows the morally bankrupt nature of that country. Athletes with a range of physical and intellectual disabilities, including mobility disabilities, amputations, blindness, and cerebral palsy just don't get the support which is not only sad for them but for the country as well, because becoming aware of the adversities these people had to overcome is most inspiring. The human spirit at work..

Restarting Rho Xs today is a Norwegian from the internet age, he choose a unique name deriving it from Amethyst a much worshipped crystal, considered extravagance in violet, Moses even described it as a symbol of the Spirit of God. Combining it with ium means Google won't have you confused, he's easy to find then this Øystein Ramfjord. He made another smart move by posting free tracks at MP3.com, later even selling thru it, the respons he got, got him noticed and signed to then EMI subsidiary Neurodisc Records. Yes yes all from a provincial fjordharbour city, Trondheim. He's got a Youtube channel and of cause the obligatory facebook and twitter space, a selfmade internet artist...

Amethystium is a music project created by Norwegian composer and producer Øystein Ramfjord, usually featuring guest performers. Characterized by a melodic and atmospheric fusion of electronic and organic sounds, the music crosses genres like electronica, world music, ambient and neoclassical darkwave, with moods ranging from upbeat or relaxing to dark and melancholic.

Øystein's real start would be when he was around 14 and got "obsessed" with recording my own compositions and ideas, using a keyboard with a basic internal sequencer, a guitar, and a stereo tape recorder that enabled him to record two separate mono tracks. First few years playing alongside with others in groups, but eventually it just took over completely. Being a bit of a control freak has something to do with it. As he started listening to other electronic based music, he began to get a better idea of what he wanted to do musically, and Amethystium grew out of that. The first songs that would later be released were completed in 1998, and the first demo was recorded in late 1999.

After starting out independently with a demo release that quickly garnered a following through word of mouth and a strong respons to the free downloads at MP3.com, Amethystium got signed to then EMI subsidiary Neurodisc Records. The first three albums all charted on the American Billboard charts, and sold over 100.000 copies worldwide. In 2006 a retrospective compilation titled “Emblem (Selected Pieces)” was released, and the long awaited fourth studio album came in 2008, titled Isabliss.

Several mini-releases have been planned for 2012, and a new full-length album is also in the works.

It is obvious that Amethystium has been a good student of the sonic and emotional styles of his 'musical elders', because this album both invokes and transcends them all. One can clearly hear the homage to these various musical works in the body of the album, but it also has a unique voice of its own. This is clearly the mature flowering of this genre- a climb to a well-developed high point of sonic excellence. For a first outing, it is awesome.

The sonic landscape is a very eclectic one: Middle Eastern blends with Celtic, and Sanskrit chants segue over to Gregorian chants. A familiar sample of Tibetan/Nepalese street sounds accents a couple of the cuts (Avalon and Lhasa)- one I recognized from Delirium's Karma: Enchantment. Clearly, there is a lot of creative cross-pollination in World Fusion today. I love it- one sample from an old Tibetan field recording or Gregorian chant can say entirely different things in different musical settings.

To fulfill your daily triva quota, "Odonata" is the scientific term for "dragonfly" (more specifically, it's the Order to which all dragonfly species belong). 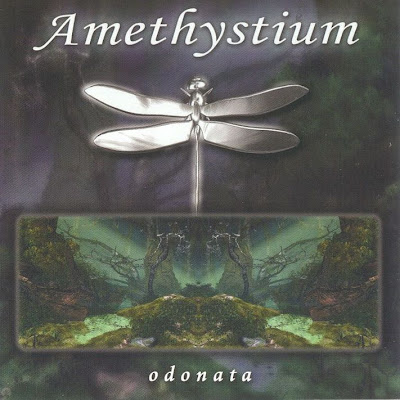 So, what's new here? Actually, quite a bit. Ramfjord incorporates more overt vocals on some tracks (which may or may not sit well with everyone - personally, I liked the additional singing most of the time) and he also adds some new world fusion wrinkles here and there (such as the opening tabla on "Garden of Sakuntala"). Of course, fans of his first effort (Odonata) won't be disappointed by songs like the opening "Shadow to Light" which opens with haunting female choruses on top of a bed of liquid synths, only to have some rapid-fire broken beats enter the mix, followed soon by one of Ramfjord's patented synth sounds echoing out a lonely plaintive refrain.

From the bubbling sexiness of "Exultation" to the glitch-ambient touches that grace the opening of "Gates of Morpheus" to the percolating synths, shuffling high hats, and sultry wordless vocals of "Shibumi," this album begs to be cranked up and grooved to, either on your living room floor or in your car cruising down the highway.

More trivia "aphelion": an object's solar orbit, the point which at which it is farthest from the sun. 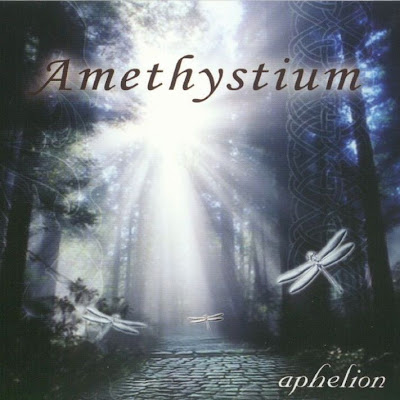 This is the fourth album in the unfolding Amethystium story - the fifth if you count the compilation Emblem. Once more Neurodisc are the chosen label for the Norwegian bedroom artist turned producer, composer, multi-instrumentalist. If you have heard Øystein Ramfjord's previous albums you'll know what to expect - although the dragonfly trilogy, as it came to be known, was concluded with Evermind, the trademark sound is still all here, just better.

Dreamy fairy tale soundscapes delivered with lush melodic electronica and ethereal female vocals. Amethystium has deepened and developed his sound with this latest offering - the arrangements are confident and sweeping, the instrumental work lucid and bright, the vision clearer than ever. Now the vocals are mostly specially recorded performances from such singers as Lee Nisbet, Stine Mari Langstrand and Irina Mikhailova. The gorgeous downtempo beats are still multifaceted and evolving - those low key muted interlude grooves punctuating the shadows. The synth work is multi-layered; repeating phrases and arpeggios rolling over expansive pads and strings, chimes and little metalic notes twinkling in the background - warm melodies and strong themes demanding the attention, then dropping away into gentleness and quiet corners. On Isabliss the synthetics are accompanied by some deftly interwoven electric guitars and keening violins. 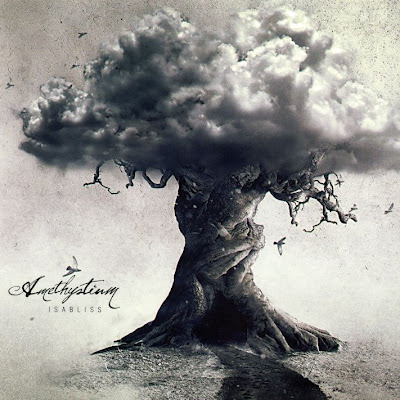 Welcome back, we have missed you!