Hello, on the night Khadaffi decides which of his 20 female, virgin bodyguards gets the honor of desecrating her body first, we're still on that island with a huge place in the global music catalogue, Jamaica. A production hothouse and they say the Weed makes you slow and lazy-go figure. Without the ganja driven reggae music Jamaica would have remained a Caribbean backwater and dare i say would never have given us Bolt, the fastest man in the world.

Today a return to the little big man of dub, Lee 'scratch' Perry, his phenomenal output knows many highlights today three of them and in lossless flac !

Lee Perry is a towering figure in reggae , some call him a genius, others claim he's a madman. Truth is, he's both, but more importantly, -- a producer, mixer, and songwriter who, along with King Tubby, helped shape the sound of dub and made reggae music such a powerful part of the pop music world. Along with producing some of the most influential acts (Bob Marley & the Wailers and the Congos to name but two) in reggae history, Perry's approach to production and dub mixing was breathtakingly innovative and audacious -- no one else sounds like him -- others may have invented dub, many argue that no one experimented with it or took it further than did Lee Perry.

Perry began his surrealistic musical odyssey in the late '50s, working with ska man Prince Buster selling records for Clement "Coxsone" Dodd's Downbeat Sound System. Soon he was producing and recording for Dodd at the center of the Jamaican music industry, Studio One. After a falling out with Dodd , Perry went to work at Wirl Records with Joe Gibbs, but not much chemistry there either so in 1968, Perry left to form his own label, called Upsetter. The first release on Upsetter was a single entitled "People Funny Boy," which sold extremely well in Jamaica, it was the first Jamaican pop record to use the loping, lazy, bass-driven beat that would soon become identified as the reggae "riddim" and signal the shift from the hyperkinetically upbeat ska to the pulsing, throbbing languor of "roots" reggae.

From this point through the 1970s, Perry released an astonishing amount of work under his name and numerous, pseudonyms he came a major force in reggae music together with his band the upsetters they worked with every performer in Jamaica. He started his own studio the black ark . Where he recorded marley and the wailers who were subsequently pick up bt Island leaving Perry standing. All the hard work in the seventies didnt do his mental state much good and it is said that he burned down the black ark studio himself as he was convinced satan had taken up resedency there..

Despite the considerable lows in his career, Perry remained busy and, so it seemed, reasonably happy. Although he was less in demand as a producer, his solo work remained very strong, and his continuing influence could be felt in the contemporary dub music of the Mad Professor. In 1997, Island (the label started by the vampire Chris Blackwell) released Arkology, a well-received three-disc compilation of Perry recordings. That same year a collaboration with Dieter Meier of the Swiss electronica duo Yello called Technomajikal arrived on the Roir label. The project was made geographically possible by Scratch's move to Switzerland.

A reunion with Trojan label happened in 2002, when the new album Jamaican E.T. was released by the label. Two years later Panic in Babylon was recorded with the European outfit White Belly Rats, while his legendary Super Ape album would receive a limited-edition reissue on the Hip-O Select label. The 1973 release Upsetters 14 Dub Blackboard Jungle -- sometimes referred to as Blackboard Jungle Dub -- saw its definitive reissue appear.

In 2008, Perry reunited with producer Adrian Sherwood on an album called The Mighty Upsetter. Unlike the dancehall/pop oriented Repentance, The Mighty Upsetter returned to the dub/reggae styles for which Perry is known. In 2009, Perry collaborated with Vienna based Dubblestandart on their Return from Planet Dub double album, revisiting some of his material from the 1970s and 80s as well as collaborating on new material with Dubblestandart.

Perry now lives in Switzerland with his wife Mireille and two children. Although he celebrated his 75th birthday in 2011, he continues recording and performing to enthusiastic audiences in Europe and North America. His modern music is a far cry from his reggae days in Jamaica; many now see Perry as more of a performance artist in several respects. Over the years a number of compilations have been released some not so good, and many of Perry's tapes were stolen. Some of these recordings have shown up on poorly mastered, and expensive, anthologies.

In Jamaica, the album was released under the name Scratch the Super Ape in July 1976 on Perry's own Upsetter label. The Jamaican version had a different track order than the international version that was released in August the same year on Island Records.

By 1976, Lee "Scratch" Perry was well established at his Black Ark studio, a fact proven by the quality of the creations emerging from its walls. The success of Max Romeo's "War in a Babylon" brought a deal with Island Records and the possibility of greater financial rewards. Scratch then turned to a creation of his own. Super Ape offered a series of the producer's finest 1976 rhythms, All are bathed in the distinct, murky atmosphere that was becoming a Black Ark trademark, then served up in the form of dub-like de-constructions. Island's this is it. Vocals from numerous cuts seem to compete for their spot on the rhythm, while a dizzying mix of horns, flute and melodica swirl around them. Super Ape is a dubwise, alternate universe to Perry's Black Ark vocal hits. 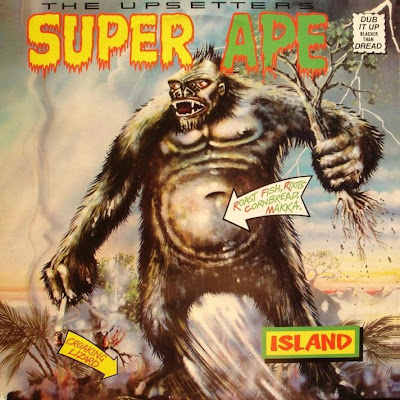 Although he had been in the Jamaican music business for a long time by 1978, this album, produced by himself at his Black Ark studio, Roast Fish Collie Weed & Cornbread was Lee Perry's 20th album, counting his sets, compilations, and full-length dub discs. Amazingly, though, it was the first album Perry exclusively dedicated to his own vocal numbers. That, however, was not necessarily a strong selling point, as even his most devoted fans admit that Perry the singer is no equal to Scratch the producer.

The album turned out to be rather experimental. Island Records, that had released earlier Lee Perry productions like Super Ape and War Ina Babylon, rejected the album. This angered Perry and his relationship with the record company got worse, understandably as it's an extremely eclectic set, both thematically and musically, but without appearing flighty or unfocused. And as highly experimental as many of the tracks are -- the rhythms throughout are particularly inspired, with the productions equally intriguing -- unlike many of Perry's earlier excursions out to the musical fringe, these numbers are eminently entertaining and downright infectious, boasting strong melodies and, dare one say it, great vocals. 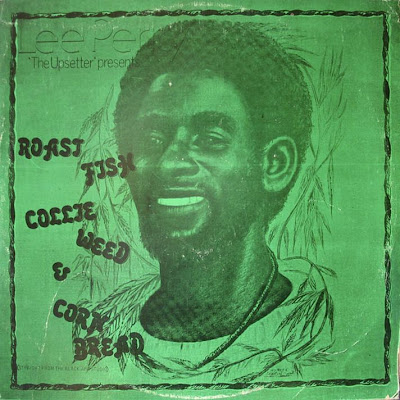 A follow-up to the highly acclaimed dub opus Super Ape, Return of the Super Ape, like most sequels, never reaches the heights of its predecessor. Unlike Super Ape, which never lets up the intensity, Return of the Super Ape contains a few throwaway cuts that seem more like a showcase of sound effects and never quite deliver that deep dub groove. Still, the album showcases yet again the prodigious production skills of undisputed dub master Lee "Scratch" Perry's insanely layered textures and technical wizardry. With the Upsetters providing deft musical backing, Perry leads the listener through a surreal world of psychedelic Rastafarianism omitting relentless, ganja-stoked basslines and eerie echoes. 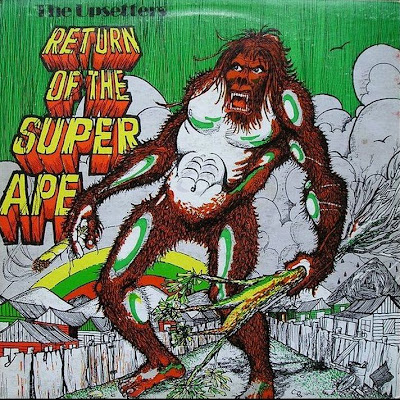 Thank you so much for posting these albums in FLAC! I have only dl-ed Roast Fish so far, the sound quality is amazing, you really come to appreciate how intricate Perry's production was. Thanks again!

Thank you O Prophet for this sonic marvels, I may download a couple...
Do you by chance posess any material about dutch group The Nits (maybe just Nits) Greetings again from southern Argentina.