Hello, today with the last part of the fifth trip, the first band of the Illuminatus! Trilogy, The Eye In The Pyramid comes to conclusion. 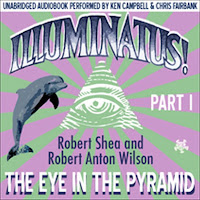 The trilogy's rambling story begins with an investigation by two New York City detectives (Saul Goodman and Barney Muldoon) into the bombing of Confrontation, a leftist magazine, and the disappearance of its editor, Joe Malik. Discovering the magazine's investigation into the assassinations of John F. Kennedy, Robert F. Kennedy, and Martin Luther King, Jr., the two follow a trail of memos that suggest the involvement of powerful secret societies. They slowly become drawn into a web of conspiracy theories. Meanwhile, the magazine's reporter, George Dorn — having been turned loose without support deep in right-wing Mad Dog, Texas — is arrested for drug possession. He is jailed and physically threatened, at one point hallucinating about his own execution. The prison is bombed and he is rescued by the Discordians, led by the enigmatic Hagbard Celine, captain of a golden submarine. Hagbard represents the Discordians in their eternal battle against the Illuminati, the conspiratorial organization that secretly controls the world. He finances his operations by smuggling illicit substances.