Hello, time for another Aetix episode and an example of how drug abuse in combination with strong emotions can bring about art, be it accompanied by lots of pain, never so extremely felt by the apperently not so macho frontman of the band who saw his lover leave with his bassplayer. Ah yes those bassblayers, always quietly moving their hips....and their lips.
Anyway it was the final straw, long before he made some great albums, the first two are up for grabs here.

The Gun Club was formed by Jeffrey Lee Pierce, former head of the Blondie fan club in Los Angeles. Joining him was Brian Tristan, who was later renamed Kid Congo Powers during his stint with The Cramps, Don Snowden and Brad Dunning. Pierce played guitar and lead vocals, while Tristan took on lead guitar, Snowden on bass, and Dunning rounding out the quartet on drums. The band was originally a rockabilly band called The Cyclones led by Pleasant Gehman on lead vocals, but Gehman departed after only one show. Adopting the name "The Creeping Ritual", Pierce moved to vocals and they spent some time gigging at local venues. Snowden and Dunning departed around this time, being replaced by two ex-members of The Bags, Rob Ritter and Terry Graham, respectively. Eventually, the group grew dissatisfied with their name and switched to "The Gun Club", suggested by Pierce's roommate, Black Flag and Circle Jerks singer Keith Morris. Pierce was already a notorious drunk, exhibitionist, poet and fanboy and The Gun Club were quickly a dangerous new spoke on the spinning wheel of dynamic LA alt-culture.

Kid Congo left before the recording of the first album to join The Cramps. He was replaced by Ward Dotson, who would play lead and slide guitar on the band's debut album. Securing a record deal on Slash Records division Ruby, the group released their debut album, Fire of Love in 1981. The album was produced by Tito Larriva of The Plugz and The Flesh Eaters frontman Chris D. Critic this debut LP was hotly anticipated throughout lowbrow Los Angeles upon its release, as the band had acquired an early reputation for cathartic, tear-'em-up live performances. Main Flesh Eater Chris D. took to releasing this fine platter on his own vanity subsidiary of Slash, Ruby Records.

1982 and the band had signed to Blondie guitarist Chris Stein's Animal Records. The band temporarily relocated to New York to record their follow-up album, 1982's Miami. This album would feature not only Stein as producer, but also Debbie Harry on backup vocals on select tracks. Upon release, the album received good reviews but was widely criticized for Stein's production, which was said to have a thin mix. Rob Ritter left shortly after the album, changing his name to Rob Graves and forming the band 45 Grave. Before leaving, Ritter taught all of his bass parts to his former Bags bandmate Patricia Morrison and trained her as his replacement. Due to increasingly common arguments, Pierce dismissed Graham and Dotson also.

Pierce returned to guitar playing during this new line-up, and both he and Powers are credited with guitar on their third album, 1984's The Las Vegas Story. This album marked a significant change for the band; it represented a shift away from the punk rock of Fire of Love and Miami and a step towards a more polished, alternative rock sound. After gigs supporting Siouxsie and the Banshees, the band decided to call it quits and played their farewell shows in the winter of 1984.

During the break-up, Powers, Morrison, and Desperate formed a band called Fur Bible, while Jeffrey Lee Pierce embarked on a solo career. Pierce assembled a band consisting of former members of The Cure and Roxy Music and released Wildweed in 1985. He organized a new band to tour in support of the album, including Nick Sanderson of Clock DVA and Pierce's then-girlfriend Romi Mori. Sanderson played drums while Mori played guitar.

After a short stint doing spoken word performances, Pierce decided to reform a new version of the band in 1986. Powers, who had also been recruited into Nick Cave & The Bad Seeds at this time, resumed his place at guitar, with Mori switching to bass, and Sanderson retaining his place on drums. Under this line-up, The Gun Club would record a handful of albums, including 1987's Mother Juno. This album, produced by Robin Guthrie of The Cocteau Twins, was met with positive critical reception and was a successful comeback for the band. After the release of Nick Cave's 1990 album The Good Son, Kid Congo Powers departed The Bad Seeds to focus more on The Gun Club.

1990 saw the release of the band's fifth studio effort, Pastoral Hide and Seek, which Pierce produced himself. Nick Sanderson departed after the release of 1991's mini-album Divinity to focus on his other project, World of Twist. He was replaced with Simon Fish, who had previously played with Pierce on one of his solo albums. In 1992, Powers left the band to focus on his solo project Congo Norvell, without their lead guitarist, Pierce decided to handle both lead and rhythm guitar parts on what would be their final album, 1993's Lucky Jim. Pierce and Romi Mori had, at this point, been dating since the mid-eighties. However, Sanderson and Mori grew increasingly close until finally the two eloped in 1994, leaving The Gun Club without a rhythm section. Pierce, by his own account, had been off of drugs for several years but soon switched back to drug and alcohol abuse after the departure of his longtime girlfriend.

Jeffrey Lee Pierce - reggae fan, heroin addict, and former president of the Blondie fan club - upheld the confident predictions of many by dying a lonely and fairly depressing death over fourteen years ago, on March 31st, 1997. Pierce's Johnny Thunders-esque holdout in the face of self-wrought bodily deterioration was oddly admirable, yet in no way was the man mistaken for a hero for it. He expired of a brain hemorrhage at a relative's house in Utah, HIV-positive and sick with hepatitis after untold years of drug use, alcoholism and the usual other suspects.

What makes Fire Of Love such a brilliant listen long after its time is the fact that this blatant homage to the blues was amplified, energized and kicked into overdrive - yet not in the way that, say, The Yardbirds or Led Zeppelin did it, but in a
new style that combined the ghostliness of the original model with a FAST, unwound and supremely energetic beat. The band had a studio magic that was tight & controlled in all the right places, yet loose and wild as a general rule. Ward Dotson joined Greg Ginn and Karl Precoda as one of LA's early '80's gutter-circuit guitar heroes, with each man bringing a totally unique slant to his instrument. Dotson attacked the guitar with each rise in tempo, all the while keeping the sound harmonious with the desired mood. Usually this mood was pretty bleak (but crazed), and harkened to moonlit, fevered nights that spoke of sex, voodoo and imminent violence. Jeffrey Lee Pierce was far from a visionary or even a particularly outstanding musician, but he had the cajones to lead this fantastic band through the recording of an album of timelessly roughshod and unruly punk-blues, perhaps the first -- and easily the best -- of its kind. Let's give the devil his due for this one, and ask him to take real good care of Jeffrey 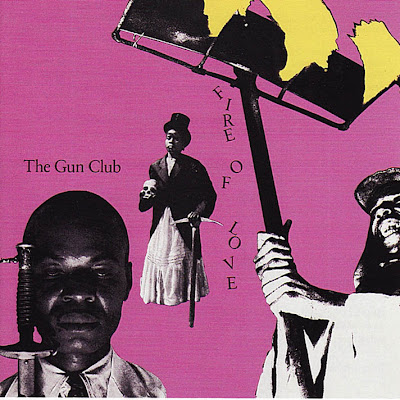 The sophomore record by the Gun Club bore the curse of having to follow a monolith of their own making. Fire of Love sold extremely well for an independent; it was a favorite of virtually every critic who heard it in 1981. Miami showcased a different lineup as well. Ward Dotson replaced Congo Powers (temporarily, at least) on guitar, and there were a ton of guest performances, including Debbie Harry and Chris Stein. Stein produced the album.

Going for a higher, more desolate sound, frontman and slide player Jeffrey Lee Pierce and his band were literally on fire. The songs here centered themselves on a mutant form of country music that met the post-punk ethos in the desert, fought and bloodied each other, and decided to stay together. Pierce and company pull out all the roots and reveal them for what they are: "John Hardy," is a squalling punk-blues, with the heart of the country in cardiac arrest. Dotson proved to be a fine replacement for Congo Powers, in that his style was pure Telecaster country revved by the Rolling Stones and Johnny Thunders. Miami was given a rough go when it was issued for its production. But in the bird's-eye view of history its songs stack up, track for track, with Fire of Love and continue to echo well . 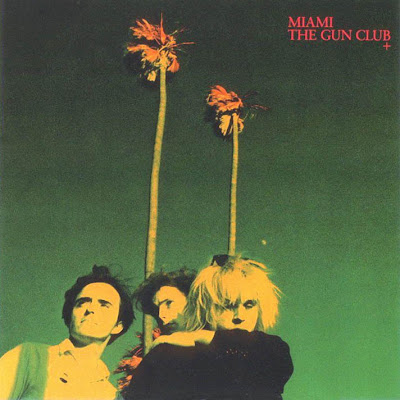 Thanks for alerting the young'uns to this succulent gumbo of sound. Blessings on Jeffrey Lee, carried home.