Hello, I always liked the music of JB, even when in general soul/funk is not as much my thing as other kinds of music, as a dj i can say he always captured the attention on and off the dancefloor, he was respected thru out the music scene and audiences. As such he will be remembered as one of the greatest music artists of the 20th century, one that really did his "thang" with the full force of his convictions and being.

James Brown first recorded professionally 50 years ago and from this first session came his first million seller "please, please, Please". 30 years later when this cd was compiled he was in the charts with Unity together with electro-funkateer Afrika Bambaata , inbetween he scored a 100 us hits, 40 million sellers. JB has cut some of the deepest grooves in popular music, and carved a legendary career , the total impact and importance of which will see the appreciation now that he's no more.

JB was admitted to the Emory Crawford Long Hospital in Atlanta, Georgia on December 24, 2006 after a dentist visit where he was found to have severe pneumonia. Brown died the next day on December 25, 2006, around 1:45 a.m. at the age of 73. Thusfar the response has been one of shock as nobody saw it coming, infact he had performing engagements later this week. It must have been a very virulent and nasty influenza virus..

JB 's sound, structure, the spirit of his monumental outpput was way ahead of it's time, a lot of what you hear in black music and pop offshoots is based on what JB layed down in the sixties. His self awareness, motivation and determination manifested when he assumed total command of his career in the sixties, with " I'm black and I'm proud" he showed coloured people a route out of the victimized trap.

Soulbrother # 1, Godfather of Soul , Founder of Funk and "the hardest working man in showbizz" is no more, but his soul lives on..... in many a heart around this world.

This polydor/philips CD is from the very earliest days of digital technology. It features 18 of James Brown's greatest songs. Interestingly, a few of the songs here are not the hit versions, but instead are alternate versions. Either way, they are all the great performances. Highly recommended. 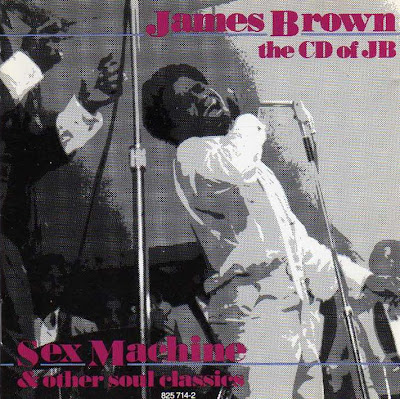 A re-up of this would be most appreciated please, Rho.

Thanks again, Rho & best of luck getting your ailing disk back up and running...