Hello, since today's artist sudden death back in 96 there have been a lot of retrospectives cashing in on the man's good name in music, hence i started last week with 4 samplers and this week some of his solo albums


Today's Artist is an American blues, soul, and funk musician and singer-songwriter. A flamboyant showman and electric guitarist in the style of T-Bone Walker, he recorded throughout the 1950s and 1960s with some success. His creative reinvention in the 1970s with disco and funk overtones, saw him have hits with "Ain't That a Bitch", "I Need It" and "Superman Lover". His successful recording career spanned forty years..Our man was not just a guitarist: he was a master musician. He could call out charts; he could write a beautiful melody or a nasty groove at the drop of a hat; he could lay on the harmonies and he could come up with a whole sound....... N'joy

Watson was born in Houston, Texas. His father John Sr. was a pianist, and taught his son the instrument. But young Watson was immediately attracted to the sound of the guitar, in particular the electric guitar as played by T-Bone Walker and Clarence "Gatemouth" Brown. His grandfather, a preacher, was also musical. "My grandfather used to sing while he'd play guitar in church, man," Watson reflected many years later. When Johnny was 11, his grandfather offered to give him a guitar if, and only if, the boy didn't play any of the "devil's music". Watson agreed. A musical prodigy, Watson played with Texas bluesmen Albert Collins and Johnny Copeland. His parents separated in 1950, when he was 15. His mother moved to Los Angeles, and took Watson with her. In his new city, Watson won several local talent shows. This led to his employment, while still a teenager, with jump blues-style bands such as Chuck Higgins's Mellotones and Amos Milburn. He worked as a vocalist, pianist, and guitarist. He quickly made a name for himself in the African-American juke joints of the West Coast, where he first recorded for Federal Records in 1952. He was billed as Young John Watson until 1954. That year, he saw the Joan Crawford film Johnny Guitar, and a new stage name was born.

Watson affected a swaggering, yet humorous personality, indulging a taste for flashy clothes and wild showmanship on stage. His "attacking" style of playing, without a plectrum, resulted in him often needing to change the strings on his guitar once or twice a show, because he "stressified on them" so much, as he put it. Watson's ferocious "Space Guitar" single of 1954 pioneered guitar feedback and reverb. Watson would later influence a subsequent generation of guitarists. His song "Gangster of Love" was first released on Keen Records in 1957. It did not appear in the charts at the time, but was later re-recorded and became a hit in 1978, becoming Watson's "most famous song".

He toured and recorded with his friend Larry Williams, as well as Little Richard, Don and Dewey, The Olympics, Johnny Otis and, in the mid-1970s with David Axelrod. In 1975 he is a guest performer on two tracks (flambe vocals on the out-choruses of "San Ber'dino" and "Andy") on the Frank Zappa album One Size Fits All. He also played with Sam Cooke, Herb Alpert and George Duke. But as the popularity of blues declined and the era of soul music dawned in the 1960s, Watson transformed himself from southern blues singer with pompadour into urban soul singer in a pimp hat. His new style was emphatic – the gold teeth, broad-brimmed hats, flashy suits, fashionable outsized sunglasses and ostentatious jewelry made him one of the most colorful figures in the West Coast funk scene. He modified his music accordingly. His albums Ain't That a Bitch and Real Mother For Ya were landmark recordings of 1970s funk.

The shooting death of his friend Larry Williams in 1980 and other personal setbacks led to Watson briefly withdrawing from the spotlight in the 1980s. "I got caught up with the wrong people doing the wrong things", he was quoted as saying by The New York Times. The release of his album Bow Wow in 1994 brought Watson more visibility and chart success than he had ever known. The album received a Grammy Award nomination.

In a 1994 interview with David Ritz for liner notes to The Funk Anthology, Watson was asked if his 1980 song "Telephone Bill" anticipated rap music. "Anticipated?" Watson replied. "I damn well invented it!... And I wasn't the only one. In 1995, he was given a Pioneer Award from the Rhythm and Blues Foundation in a presentation and performance ceremony at the Hollywood Palladium. In February 1995, Watson was interviewed by Tomcat Mahoney for his Brooklyn, New York-based blues radio show The Other Half. Watson discussed at length his influences and those he had influenced, referencing Guitar Slim, Jimi Hendrix, Frank Zappa and Stevie Ray Vaughan. He made a special guest appearance on Bo Diddley's 1996 album A Man Amongst Men, playing vocoder on the track "I Can't Stand It" and singing on the track "Bo Diddley Is Crazy".

Watson died of a heart attack on May 17, 1996, collapsing on stage while on tour in Yokohama, Japan. His remains were brought home for interment at Forest Lawn Memorial Park Cemetery in Glendale, California and buried in the Great Mausoleum, Sanctuary of Enduring Honor, Holy Terrace entrance.

Watson, a recognized master of the Fender Stratocaster guitar, has been compared to Jimi Hendrix and allegedly became irritated when asked about this comparison, supposedly stating: "I used to play the guitar standing on my hands. I had a 150-foot cord and I could get on top of the auditorium – those things Jimi Hendrix was doing, I started that shit." Frank Zappa stated that "Watson's 1956 song 'Three Hours Past Midnight' inspired me to become a guitarist". Watson contributed to Zappa's albums One Size Fits All (1975), Them or Us (1984), Thing-Fish (1984) and Frank Zappa Meets the Mothers of Prevention (1985). Zappa also named "Three Hours Past Midnight" his favorite record in a 1979 interview.Steve Miller not only did a cover of "Gangster of Love" on his 1968 album Sailor (substituting "Is your name "Stevie 'Guitar' Miller?" for the same line with Watson's name), he made a reference to it in his 1969 song "Space Cowboy" ("And you know that I'm a gangster of love") as well as in his 1973 hit song "The Joker" ("Some call me the gangster of love"). Miller had also borrowed the sobriquet for his own "The Gangster Is Back", on his 1971 album Rock Love.

Coming out of Houston's fertile blues scene with Albert Collins and Johnny Copeland, Johnny "Guitar" Watson trod the same route to fame that his peers did in the latter half of the '50s and for most of the '60s. Unlike Collins and Copeland, though, Watson found his biggest success as a funkster in the '70s. And lest one thinks of an aging blues legend embarrassing himself aping the innovations of George Clinton and Sly Stone, Watson found a singular groove by slicking up his already urbane blues style with lots of tasty horn arrangements, plenty of fat basslines, and wah-wah-issue guitar licks. The latter element, of course, was to be expected from a virtuoso such as Watson. And whether reeling off one of his subtle solos or blending in with the band, the reborn blues star was never less than compelling. Ain't That a Bitch, from 1976, heralded Watson's new funk era with plenty of guitar treats and one of the best batch of songs he ever cooked up. The variety here is stunning, ranging from the calypso-based blues swinger "I Need It" to the quiet storm soul ballad "Since I Met You Baby." In between, Watson goes widescreen with the comic book funk of "Superman Lover" and eases into an after-hours mood on the organ-driven jazz and blues gem "I Want to Ta-Ta You Baby." Besides the fine Watson roundups on the Rhino and Charly labels, Ain't That a Bitch works beautifully as a first-disc choice for newcomers, especially those who want to hear the '70s funk material. 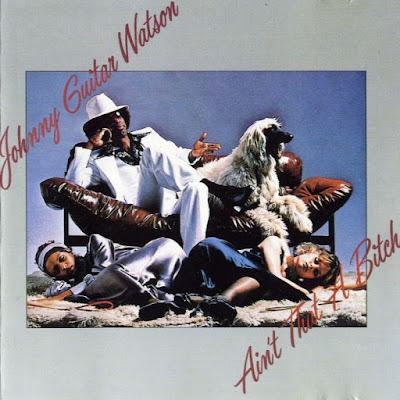 Obviously, the storming funk workout that gives this 1977 gold album its title is the album's principal draw (it's been covered countless times, but never duplicated). As was his wont by this time, the multitalented Watson plays everything except drums and horns. 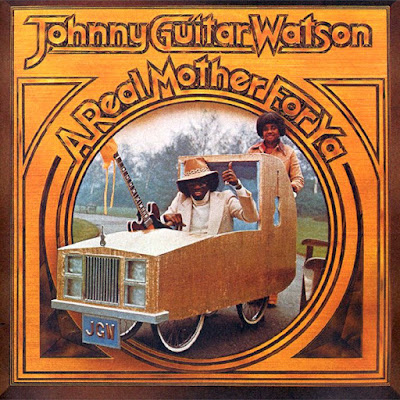 This is a relatively low-budget, self produced album that Johnny Guitar made and played all of the instuments on several tracks, before he had his big "comeback" album, Bow-Wow.  Nevertheless he always plays a nice funky beat and if you like his music, then you will enjoy this album, although it is be no means his greatest stuff. After his tentative "Strike on Computers" nicked the R&B lists in 1984, Watson again seemed to fall off the planet. But then prophets that predict disaster if we continue on the path created by computers weren't taken too seriously in 1984- go figure even if 4 years earlier Kraftwerk maneged to predict exactly what would happen on Computerworld. And now 2018 we've become enslaved to it and monetized by the dark forces of greed. 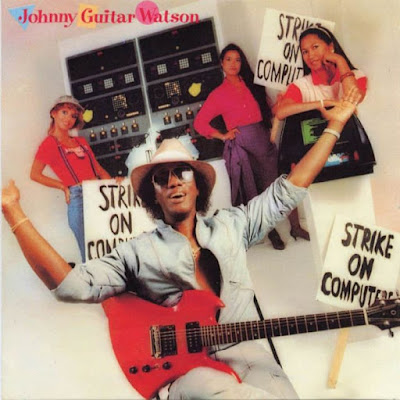 Bow Wow, his 1994 album for Al Bell's Bellmark logo, returned him to prominence and earned a Grammy nomination for best contemporary blues album, even though its contents were pure old-school funk.
No matter how you felt about changes that Johnny Guitar Watson made during his long career, he always tried to keep current and go with the funky flow. Bow Wow finds Watson treading on disco, funk, and early rap territory. Even though Watson produced, wrote, and arranged these sessions, it often sounds as if someone else should have been in control to help keep up the energy. Most of this material would have been more effective if a funkmeister like George Clinton could have been at the production helm, found some better material, and completely pushed Watson to simply have fun as an innovator and elder statesman to an up and coming generation primed for the kind of mischief unfortunately missing from Bow Wow. 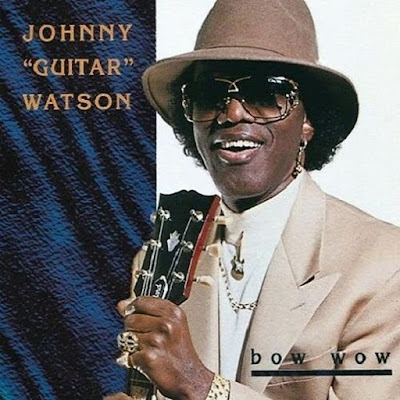