Hello, Laetitia Sadier proved to be the driving force behind Stereolab, these days she's solo before she's tried out other musical companions, time to meet them...

Today's Artist is a French musician who was formerly a founding member of the London-based avant-pop band Stereolab. While a member, she formed her side project in 1996 to play her own solo songs; but retired the project in 2009 to perform new solo work under her name, then again in 2014 she hooked up again ........N'Joy

Monade (pronounced mon-ard) originally featured Laetitia Sadier and Pram's Rosie Cuckston. The duo began collaborating in the mid-'90s, and Sadier recorded the first Monade tracks in 1996 at Pram's studio, with Cuckston playing and also helping to engineer the session. Some of these tracks were released by Duophonic as the Sunrise Telling and Witch Hazel/Ode to a Keyring singles. Sadier continued to record at Stereolab's own studio without Cuckston, and one of these tracks, "Cache Cache," ended up as a B-side on Stereolab's Calimero single. In between her Stereolab duties, Sadier completed enough material for Monade's debut album, Socialisme Ou Barbarie: The Bedroom Recordings, which was released by Duophonic in Europe and by Drag City in the U.S. in spring 2003 after being produced part-time over a period of six years. They have released two albums to date on the Duophonic label which is partially owned by Sadier herself.

Their second album, A Few Steps More (2005), marks a more cohesive stage in the band's development. There is now a regular lineup, and it was recorded using studio equipment. The album has been roundly praised and criticised for its superficial resemblance to the sound of Stereolab, but several reviews have commented more on the harmonic structure of the album, which almost seems to blend symphonically at times. Asked about on the album's themes in an interview for Eye Weekly, Sadier commented: "I was trying to write to the individual and the capacity to listen to one's desires. Also, I tackled the idea of becoming. I think that's quite an important notion: that things should be allowed to become. I became a singer and it took me years and I want Monade to have a chance to become a band."

The name "Monade" was taken from Cornelius Castoriadis' concept of the "monade psychique" (psychical monad), which was the term Castoriadis used to describe the undifferentiated infantile psyche, before its shattering into the ego, super-ego, and id through the process of socialization. Lætitia Sadier has stated that the name has a double meaning – the word "monade" is from the root word "mono-" (meaning "one") and etymologically related to the sound recording term "mono", which stands in contrast to stereo, and therefore is a reference to Monade as a solo side project to Stereolab. The title of Monade's first album pays tribute to a libertarian Marxist political group founded by Castoriadis, Socialisme ou Barbarie. In March 2008, a new Monade album was released, without any promotion, called Monstre Cosmic.

On September 19, 2009 at The BirdCage in London, it was announced that it was Laetitia's last performance under the name Monade. Laetitia played a selection of new solo songs.

Monade's full-length debut, Socialisme ou Barbarie: The Bedroom Recordings, collects Laetitia Sadier's recordings both with and without Pram's Rosie Cuckston. Despite the fact that these songs were created over a period of six years and in between Sadier's Stereolab duties, they hang together remarkably well; as "The Bedroom Recordings" suggests, this album offers warmth and intimacy; much more, in fact, than Stereolab's later efforts, which often felt detached and overly polished. Though Socialisme ou Barbarie is by no means a lo-fi effort, its more modest sonics offer many small pleasures, such as "Cache Cache" (which also appeared as a Stereolab B-side), with its loping bassline, serpentine melody, and aloof vocals; the moody, guitar- and cello-driven "Witch Hazel"; "Vent Du Sud," which manages to be funky and bittersweet at the same time; and "Graine De Beaute," a pretty ballad that sounds like an even mellower version of the quieter songs on Stereolab's earlier albums. Indeed, most of Socialisme ou Barbarie is pretty and mellow; while this gives the album cohesion, it also means that some of the weaker, more repetitive tracks like "Enfin Seule" and "Sunrise Telling" tend to fade into the background. By its second half, the album's side-project roots reveal themselves in pleasant but uninspired musical wallpaper such as "Ode to a Keyring"; but before it stalls, Socialisme ou Barbarie does offer some unique moments, such as "Un Express," which ties together blues and Krautrock with Sadier's undeniable je ne sais quois. It's not as much of a revelation, but Socialisme ou Barbarie's understated charm makes it worth a listen for Sadier's dedicated fans. 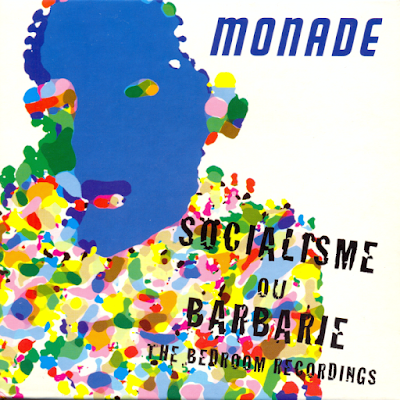 On Monade's second album, A Few Steps More, Laetitia Sadier turns her formerly intimate, bedroom-based Stereolab side project into a more full-fledged band, adding a drummer, guitarist, and bassist/second vocalist. Though the small, often homespun feel of Socialisme ou Barbarie was a big part of its charm, Monade makes the transition from solo act to band more or less seamlessly, gaining a bigger sound without losing Sadier's distinctive stamp. Though this band's arrangements are simpler and slightly more rock-based than Stereolab's, Sadier's vocals and melodies are unmistakable, no matter what their surroundings, and like almost all of Sadier's projects, this new version of Monade and A Few Steps More are nothing less than lovely. This set of songs is also more consistent than Socialisme ou Barbarie, with "Paradoxale," the stylish title track, the summery "Das Kind," and the hypnotic, mercurial duet "Sensible et Extensible" holding the album together, and shorter songs like "Ditty Sweep" and "Dittyam" offering small but colorful musical sketches. A pretty, refreshing working holiday, A Few Steps More balances the intimate charm of Monade's previous work with a slightly more ambitious, but still off-the-cuff, feel that should please Sadier fans. 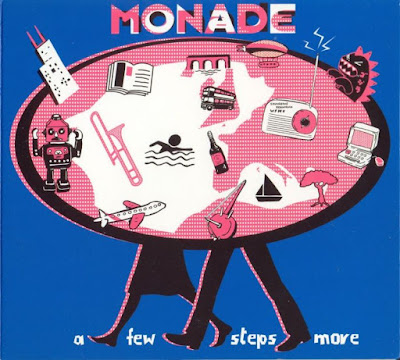 It's a little unusual for a band to release its most captivating work more than a decade into its career, but this is the case with Monade's Monstre Cosmic. The band's slow, subtle development has often been overshadowed by Laetitia Sadier's work with Stereolab, but while Socialisme ou Barbarie captured Monade's bedroom studio beginnings and A Few Steps More took a giant leap towards making Monade a full-fledged band, this album puts the finishing touches on Monade's transformation, revealing them as an elegant equal -- or at the very least, companion -- to Sadier's Stereolab output. More than Monade's other albums, Monstre Cosmic's songs boast clean melodic arcs that layer over each other, building with an almost architectural precision and beauty. "Etoile" is a study in contrasts, balancing bittersweet vocal melodies with warm, comforting basslines and shimmering keyboards, while "Lost Language"'s sleek yet elaborate strings and vibes wouldn't sound out of place on a Stereolab album. That goes double for "Tout en Tout Est Un"'s bossa nova-tinged interludes and "Messe Joyeusse"'s chiming, retro-futuristic chamber pop -- but they aren't exactly carbon copies of Sadier's other band, either. Monstre Cosmic's lavish arrangements echo Emperor Tomato Ketchup and Dots and Loops, but they're more streamlined and straightforward, even when "Regarde" switches from a lush melody to an astringent, single-note guitar solo, or when "Elle Topo" throws tympani and ticking watches into its spaghetti western theme mix. As with Monade's other albums (and truth be told, with Stereolab's work at times), the album becomes slightly samey as it unfolds, although "Change of Destination" closes Monstre Cosmic with effortlessly charming call-and-response pop. Even at its least inspired, the album floats by like a dream. With Monstre Cosmic, the gap between Monade and Stereolab may be narrower than ever, but Sadier's voice, melodies, and arrangements always make for an elegant experience, however she chooses to present them. 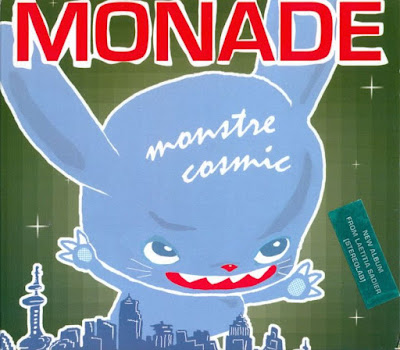 Little Tornados are a collective of instrumentalists formed around the core of filmmaker (and longtime Stereolab photographer) David Thayer, as well as Sadier; she’s on vocals and bass, while he handles vocals and guitar. In other words, it’s a similar group dynamic to the one Stereolab uses—only with Thayer assuming the role of Tim Gane. We Are Divine tracks like “In the Garden”, “How Many,” and “Space Liner”, laden with jazzy chords and playful ambience, could pass for decent, latter-day Stereolab outtakes, only looser and less densely layered. But it’s the lyrics of “Manifest” that hew closest to Stereolab’s alchemy of politics and pop, only it gets the balance wrong; over bouquets of vintage synths, Sadier’s pamphleteer-level pleas for freedom, equality, and brotherhood come off as canned, regardless of how exquisitely phrased they are in French.

We Are Divine, however, is not simply a cloned version of Stereolab; Thayer weighs in often with his distinct, low-key, mystic-bohemian ramble, and it brings a winning prog vibe to “Unicorn”; “Ben’s Boat” is a twangy, twinkling instrumental that borders on kosmische-country. The album’s definitive moment, “Have a Balloon”, is dashed and dotted with Sadier’s signature ba-ba-bas and da-da-das, with the occasional jazz-fusion fanfare on horns. The song is gorgeous, but it also gently mocks: like day-glo highlighting in a used Guy Debord textbook, the title and melody work together to magnify the Society-of-the-Spectacle message Sadier has been whispering into our ears all along. 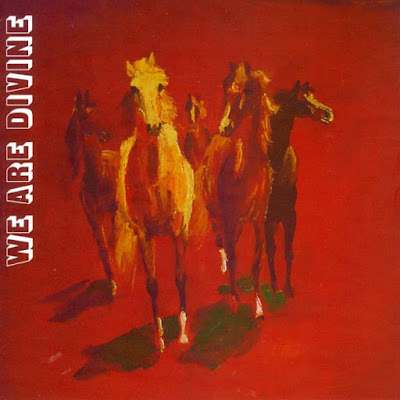 You are my Hero.Thanks for Great Music.
Greetz
Carlo

thank you very much for Monade!
Robert

Hi Rho. Is a reup of We Are Divine possible please?

Missed these Stereolab related albums first time round. Hoping they are valid candidates for a repost? Would be great if that could happen. Thanks Rho.