Hello, did you notice Roger won his 20th grandslam in his 30th final no? You might be forgiven to think this tennis must be a boring game. But you'd be wrong there, specially when Federer is playing, these days he plays chess-tennis using his fast experience to outwit his younger opponents and whilst there are many that rave about Nadal's power tennis, it is not nearly as entertaining as Federer's chess-tennis, Roger respects the game and his opponents and the viewers that want to be entertained...

Today i added the first 2 Neverwhere comicbooks , as i added his


Confused ? Why not delve into London's underbelly......'N Joy

Neil Richard MacKinnon Gaiman born 10 November 1960 is an English author of short fiction, novels, comic books, graphic novels, audio theatre, and films. His notable works include the comic book series The Sandman and novels Stardust, American Gods, Coraline, and The Graveyard Book. He has won numerous awards, including the Hugo, Nebula, and Bram Stoker awards, as well as the Newbery and Carnegie medals. He is the first author to win both the Newbery and the Carnegie medals for the same work, The Graveyard Book (2008). In 2013, The Ocean at the End of the Lane was voted Book of the Year in the British National Book Awards

After forming a friendship with comic-book writer Alan Moore, Gaiman started writing comic-books, picking up Miracleman after Moore finished his run on the series. Gaiman and artist Mark Buckingham collaborated on several issues of the series before its publisher, Eclipse Comics, collapsed, leaving the series unfinished. His first published comic strips were four short Future Shocks for 2000 AD in 1986–87. He wrote three graphic novels with his favourite collaborator and long-time friend Dave McKean: Violent Cases, Signal to Noise, and The Tragical Comedy or Comical Tragedy of Mr. Punch. Impressed with his work, DC Comics hired him in February 1987, and he wrote the limited series Black Orchid. Karen Berger, who later became head of DC Comics's Vertigo, read Black Orchid and offered Gaiman a job: to re-write an old character, The Sandman, but to put his own spin on him.

The Sandman tells the tale of the ageless, anthropomorphic personification of Dream that is known by many names, including Morpheus. The series began in January 1989 and concluded in March 1996. In the eighth issue of The Sandman, Gaiman and artist Mike Dringenberg introduced Death, the older sister of Dream, who would become as popular as the series' title character. The limited series Death: The High Cost of Living launched DC's Vertigo line in 1993. The 75 issues of the regular series, along with an illustrated prose text and a special containing seven short stories, have been collected into 12 volumes that remain in print, 14 if the Death: The High Cost of Living and Death: The Time of Your Life spin-offs are included. Artists include Sam Kieth, Mike Dringenberg, Jill Thompson, Shawn McManus, Marc Hempel and Michael Zulli, lettering by Todd Klein, colours by Daniel Vozzo, and covers by Dave McKean. The series became one of DC's top selling titles, eclipsing even Batman and Superman. Comics historian Les Daniels called Gaiman's work "astonishing" and noted that The Sandman was "a mixture of fantasy, horror, and ironic humor such as comic books had never seen before". DC Comics writer and executive Paul Levitz observed that "The Sandman became the first extraordinary success as a series of graphic novel collections, reaching out and converting new readers to the medium, particularly young women on college campuses, and making Gaiman himself into an iconic cultural figure."

Gaiman and Jamie Delano were to become co-writers of the Swamp Thing series following Rick Veitch. An editorial decision by DC to censor Veitch's final storyline caused both Gaiman and Delano to withdraw from the title. Gaiman produced two stories for DC's Secret Origins series in 1989. A Poison Ivy tale drawn by Mark Buckingham and a Riddler story illustrated by Bernie Mireault and Matt Wagner. A story which Gaiman originally wrote for Action Comics Weekly in 1989 was shelved due to editorial concerns but it was finally published in 2000 as Green Lantern/Superman: Legend of the Green Flame.

In 1990, Gaiman wrote The Books of Magic, a four-part mini-series that provided a tour of the mythological and magical parts of the DC Universe through a frame story about an English teenager who discovers that he is destined to be the world's greatest wizard. The miniseries was popular, and sired an ongoing series written by John Ney Rieber. Gaiman's adaptation of Sweeney Todd, illustrated by Michael Zulli for Stephen R. Bissette's publication Taboo, was stopped when the anthology itself was discontinued.

In the mid-1990s, he also created a number of new characters and a setting that was to be featured in a title published by Tekno Comix. The concepts were then altered and split between three titles set in the same continuity: Lady Justice, Mr. Hero the Newmatic Man, and Teknophage. They were later featured in Phage: Shadow Death and Wheel of Worlds. Although Gaiman's name appeared prominently on all titles, he was not involved in writing any of the above-mentioned books.

Gaiman wrote a semi-autobiographical story about a boy's fascination with Michael Moorcock's anti-hero Elric of Melniboné for Ed Kramer's anthology Tales of the White Wolf. In 1996, Gaiman and Ed Kramer co-edited The Sandman: Book of Dreams. Nominated for the British Fantasy Award, the original fiction anthology featured stories and contributions by Tori Amos, Clive Barker, Gene Wolfe, Tad Williams, and others.

Asked why he likes comics more than other forms of storytelling, Gaiman said: "One of the joys of comics has always been the knowledge that it was, in many ways, untouched ground. It was virgin territory. When I was working on Sandman, I felt a lot of the time that I was actually picking up a machete and heading out into the jungle. I got to write in places and do things that nobody had ever done before. When I’m writing novels I’m painfully aware that I’m working in a medium that people have been writing absolutely jaw-droppingly brilliant things for, you know, three-four thousand years now. You know, you can go back. We have things like The Golden Ass. And you go, well, I don’t know that I’m as good as that and that's two and a half thousand years old. But with comics I felt like – I can do stuff nobody has ever done. I can do stuff nobody has ever thought of. And I could and it was enormously fun."

In 2009, Gaiman wrote a two-part Batman story for DC Comics to follow Batman R.I.P. titled "Whatever Happened to the Caped Crusader?" a play-off of the classic Superman story "Whatever Happened to the Man of Tomorrow?" by Alan Moore. He contributed a twelve-part Metamorpho serial drawn by Mike Allred for Wednesday Comics, a weekly newspaper-style series. Gaiman and Paul Cornell co-wrote Action Comics #894 (Dec. 2010) which featured an appearance by Death. In October 2013, DC Comics releasedThe Sandman: Overture with art by J. H. Williams III. Gaiman's Angela character was introduced into the Marvel Universe in the last issue of the Age of Ultron miniseries in 2013.

Neverwhere is a radio drama based on the novel Neverwhere by Neil Gaiman. It was dramatised by Dirk Maggs. 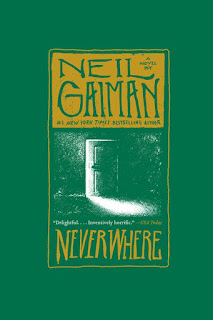 Beneath the streets of London there is another London. A subterranean labyrinth of sewers and abandoned tube stations. A somewhere that is Neverwhere.

An act of kindness sees Richard Mayhew catapulted from his ordinary life into a subterranean world under the streets of London. Stopping to help an injured girl on a London street, Richard is thrust from his workaday existence into the strange world of London Below.

So begins a curious and mysterious adventure deep beneath the streets of London, a London of shadows where the tube cry of 'Mind the Gap' takes on new meaning; for the inhabitants of this murky domain are those who have fallen through the gaps in society, the dispossessed, the homeless. Here Richard meets the Earl of Earl's Court, Old Bailey and Hammersmith, faces a life-threatening ordeal at the hands of the Black Friars, comes face to face with Great Beast of London, and encounters an Angel. Called Islington.

Joining the mysterious girl named Door and her companions, the Marquis de Carabas and the bodyguard, Hunter, Richard embarks on an extraordinary quest to escape from the clutches of the fiendish assassins Croup and Vandemar and to discover who ordered them to murder her family. All the while trying to work out how to get back to his old life in London Above.

A nine-issue comic book limited Neverwhere series began in June 2005, written by Mike Carey (of the Vertigo Comics series Lucifer), with art by Glenn Fabry. The comic is an adaptation inspired by the novel, rather than the original TV series, though apart from certain scenes in certain locations, the dialogue and plot of both novel and television series is identical. 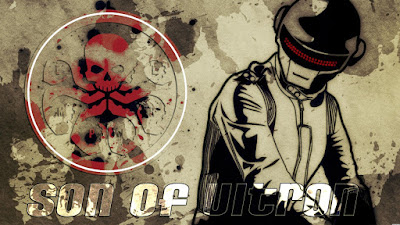