Hello, the force is strong in this one, I wasn't much impressed with Disney's first take on the Star Wars fairytale, too many ridiculous things going on, as far as I was concerned the Force needn't be reawakened . But in Hollywood when there's money to be made, specially when marketing costs can be kept down in a series, it's inevitable that the fairytale gets milked until the final drop. So now we get The Last Jedi (if only), at IMDB the reviews are very positive (surprise surprise) well, in the end another safe corporate exercise in entertainment, fleecing the gullible.


Today's artists' are one of the U.K.'s most politically outspoken thrash bands. Based in Edinburgh, the band is led by vocalist Wattie Buchan, whose supporting cast has changed several times since the group's inception around the end of the '70s. The band has garnered a sizable hardcore audience in the U.K. for its anti-authoritarian stance and criticism of the government, particularly in the Reagan/Thatcher era. ...N'Joy

The Exploited are a Scottish punk rock band from Edinburgh, Scotland, formed in 1979 in Edinburgh. The original line-up consisted of: Terry Buchan (vocals), Stevie Ross (guitar), Alan Paget (bass) and Andy McNiven (drums). Formed in the West Granton area of Edinburgh, a large grey council estate on the north side of the city. The band's politics was reflected in its name, coined by drummer and songwriter McNiven, whose father was a Korean War veteran and a Communist. While in the early stages as a band, with little equipment, the band were invited to play their first gig at Craigmuir School. The band seemed to be a victim of their own publicity here. They had spray-painted their band name locally and had stolen Sunday papers, milk, and rolls in the early hours of Sunday morning and redistributed them outside peoples' front door, with a note saying, "a gift from the exploited". Their first gig was on Friday 15 December 1978. The date was recalled by McNiven as it coincided with a performance by the Doomed (the Damned by another name) at Clouds in Edinburgh to which they went after performing their own gig. The gig was attended by Terry's older brother Wattie, who had recently left the army and was a punk in London. Wattie soon replaced Terry, and Andy McNiven and Colin Erskine were dropped from the line-up as well. Jim Park became the drummer in January 1979, first playing on February 3 1979 at the YMCA in Edinburgh, (the day after Sid Vicious died in New York City). After a few gigs in and around Edinburgh, Stevie Ross left after an appearance in Aberdeen supporting the UK Subs. A few months later, he and Terry Buchan formed The Exposed. The Exposed split in 1980 after a gig supporting The Exploited. While Terry left for London, Stevie was prominent in the Edinburgh band scene during the 1980s and fronted bands like Strychnine and Burlesque before becoming lead singer with blues band Roadside Medicine. Now based in West Lothian, he still sings and writes original songs.

Influenced by 1970s punk rock music such as music by the Sex Pistols, the quartet created a simple, no-frills sound characterized by speed and aggression. In 1980, the group founded its own independent record label, Exploited Records, and released their debut EP Army Life, which was #6 in the Indie/Independent charts for eight weeks, then was in the Top 20 for eighteen months. The B-side was called Fuck the Mods / Crashed Out and the record's back cover stated "To all the Edinburgh punks and skins - keep on mod-bashing!!". They then released another single, "Barmy Army", which jumped into the independent charts and remained there for 53 weeks, peaking at #4. Their single "Dead Cities" peaked at #31 on the UK Charts. Their single "Exploited Barmy Army" peaked at #4 on the Independent/Indie chart.

In March 1981, the band signed to Secret Records, and spent a month recording their debut album, Punks Not Dead. The Exploited released the single "Dogs of War", which peaked at #2 in the Independent charts and #63 on the UK Charts. Also in 1981, the band released their first live album, On Stage, recorded during a concert in Edinburgh. Thereafter, the band performed, along with Discharge, Anti-Nowhere League, Anti-Pasti and Chron Gen on a tour called Apocalypse Now, which was recorded and released as a live album. Their album Punks Not Dead, released in April 1981, went to #20 in May, then number 1 on the Independent Charts. During this time, The Exploited appeared on the popular mainstream TV programme, Top of the Pops. A lot of fans of The Exploited were unhappy with the band's decision to appear on the show. The hardcore punk band Conflict wrote the song Exploitation about this appearance, which began a long-standing rivalry between Conflict and The Exploited that divided the punk fan base.

The band released the album Let's Start a War in 1983 and Horror Epics in 1985. The period between these albums was marked by severe discord over the band's musical direction: guitarist Big John Duncan and bassist Gary McCormack both left to form new bands – "bands with disco beats and guitar solos, total shit", in Wattie's words – and the band went through a rapid succession of drummers, one of whom allegedly left after a "nervous breakdown". The band was driven away from the Secret label by new management who demanded unrealistic changes in style and personnel. Their next label, a tiny enterprise named Pax Records, folded after its owner fled with all its assets.

The concert album Live at the White House was recorded in Washington DC in 1985 at the 9:30 Club and was released the following year in 1986. They also released the studio EP Jesus Is Dead in 1986, following up with Live and Loud, a videography of The Exploited performing around Europe and in the United States. During the tour of the USA, Wattie and Karl Morris had a fight on stage, and Karl left shortly afterwards. He was briefly replaced by Mad Mick, who then disappeared without trace. Nigel Swanson was then appointed as the new guitarist.

"Sexual Favours", a single from the album Death Before Dishonour, was released in 1987. The album only ranked in the top 200 of the Britain Alternative Music list. However, the album sold out quickly. The album's cover featured artwork from the American punk artist Pushead, who complained that he was neither paid nor credited for the work. In 1990, The Exploited released their album The Massacre. The album is a crossover thrash album. This album was by far one of the band's most commercially successful. The band went on to release a Singles Collection album in 1993. The Exploited also released the videography Live in Japan in 1993. Their album Beat the Bastards was released in April 1996.

In January 2003, the band released their album Fuck the System on Dream Catcher Records, and also in 2003, they toured in the UK and US. On 14 October 2003, about 500 fans started a riot in Montreal, Canada after an Exploited concert was cancelled due to the band not being allowed into the country. Rioters destroyed eight cars and set them on fire; broke eleven shop windows and caused other damage. The band were banned from playing in Mexico City due to the riot.

In a 2012 interview, Wattie Buchan claimed that a new album was being finished. In February 2014, Wattie Buchan suffered a heart attack on stage during a performance in Lisbon on the band's Taste of Chaos Tour with Hatebreed and Napalm Death. He was taken to a hospital, where he was expected to receive treatment for at least a week. The band signed a deal with Nuclear Blast Records, and was to have many of its albums reissued in March 2014. The band has also confirmed that its first album in a decade will be released during the 2010s. It is currently unknown when the band's next album will be released.

Originally issued in 1981, Punks Not Dead was the Exploited's first full-length album. They'd issued singles like "Army Life" and "Exploited Barmy Army" previously, and those were re-recorded for what was hailed and/or reviled as a jagged, messy, and more aggressive reaction to the punk "establishment" of the time. The mix of hate and love toward the Exploited was fine by vocalist Wattie Buchan and his revolving cast of bandmembers -- they just wanted a reaction, to get people to really listen. Tracks like "S.P.G.," "Out of Control," and "I Believe in Anarchy" were mush-mouthed dynamos of chanting, ranting, and ragged song structure, early templates of the U.S. hardcore scene to come. 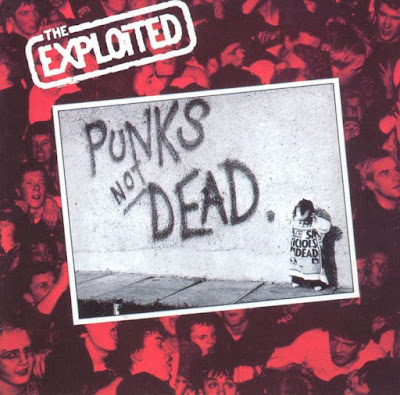 One of the most riveting British punk rock units of the early 1980s, the Exploited could have cared less about mainstream pop sensibilities and insisted on keeping things raw and hardcore. With the Clash having become more polished, the Damned and Sham 69 having gone downhill and the Sex Pistols having disbanded, the Exploited came to symbolize U.K. punk at its roughest. The Britons never had a major pop hit like the Clash's "Rock the Casbah," but they had no problem commanding a devoted following in the punk underground and among the British working class. Punk doesn't get much more passionate and recklessly fun than On Stage, recorded live in Edinburgh, Scotland in 1981. The sound quality isn't great by any means, but the band's vitality comes through loud and clear on such angry, sneering classics as "I Believe In Anarchy," "Dogs of War" and "Cop Cars." This is material that no punk fan should be without. 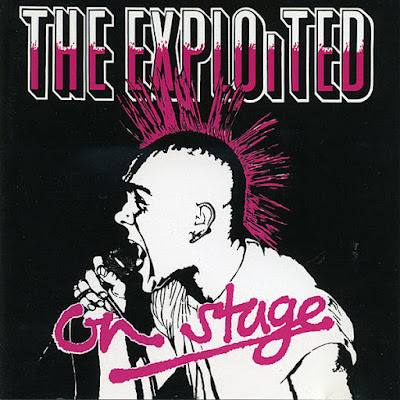 Troops of Tomorrow is one of the landmark punk albums to come from Britain. This album is connected to the Exploited possibly more than any other. It came directly after their legendary Top of the Pops performance, and several of these songs would go on to be covered by Slayer and Ice-T for the Judgment Night soundtrack. It may not have the hooks of the Damned or the clever lyrics of the Sex Pistols, but in its place they brought a brainless rage that has been one of the sore points for punk purists for years. Songs like "Sid Vicious Was Innocent" and the uninformed "War" are blatantly idiotic, but work on an entirely different level. These songs are from the gut, and honestly, they were just following in the footsteps of American punk, which had thrown cleverness out the window from the get-go. The thrashing guitars and chugging riffs would go on to influence countless bands, from like-minded American artists like SOD and Agnostic Front to fellow British hardcore heroes Discharge. The lyrics are mostly just politically inspired chanting, but the music laid the groundwork for most of the punk metal that followed. Fans of aggressive hardcore punk should try to add this to their collection. It is a classic of the genre that has held up well through the years. 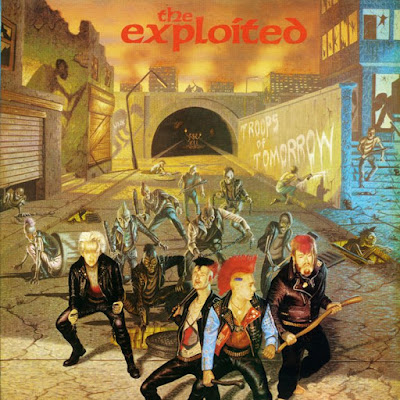 The Exploited's fourth record finds the band with an entirely new lineup (only leader Wattie Buchan remains), but never fear, the new boys prove that they are entirely capable of thrashing and, what's more, they are eager to thrash. Great, thunderous rockers like "Kidology" and "Another Day to Go Nowhere" fulfill the obligatory youth-angst requirement while "Let's Start a War (Said Maggie One Day)" and "Rival Leaders" (among many others) represent the epicenter of the group's familiar antiwar/anti-Thatcher sentiment. Nothing new in the grand scheme of punk rock in general (or the Exploited in particular), Let's Start a War...Said Maggie One Day is what it is -- punk rock comfort food. 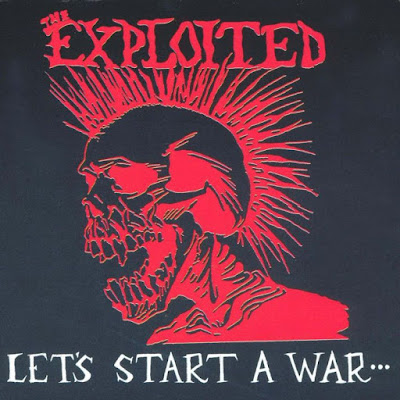