Hello, a nocturnal emission or wet dream is a spontaneous orgasm during sleep that includes ejaculation for a male, or vaginal wetness or an orgasm (or both) for a female. Nocturnal emissions are most common during adolescence and early young adult years, but they may happen any time after puberty. It is possible for men to wake up during a wet dream or simply to sleep through it, but for women, some researchers have added the requirement that she should also awaken during the orgasm and perceive that the orgasm happened before it counts as a wet dream. It's not known if this happens in space but the Brits can finally ask their first astronaut about it, bit late after many other countries had a chance to celebrate their first astronaut. Clearly they've been lacking a Francis Drake in space....

The Nocturnal Emissions project, masterminded by Nigel Ayers, has been on the cutting edge of new music since the 1970s.
Nigel Ayers has been described as a Guerrilla Sign Ontologist, cutting-up and pasting the contents of the human psyche. With a background in avant-garde art, his work has grown from audio visual installations through underground video works which changed the shape of British television.

The project was initiated in Derbyshire in the late 1970s by Nigel Ayers (b. 1957), a former art student who, in the period, lived in London. Together with collaborators Danny Ayers (b. 1964) and Caroline K (1957–2008). From early in their work, the group concentrated on the axiom of music being a form of social control, and highlighted concepts such as information overload, cult conditioning, brainwashing and subliminal advertising, in a critique of information society. Their music drew heavily on worldwide folk traditions as well as that of the European avant-garde. One of their earliest performances was in a railway arch in Atlantic Road, Brixton, while the 1981 Brixton riots raged outside.

Nocturnal Emissions ran their own record label, Sterile Records and later worked closely with the editors of the art music label Touch, later with both the Netherlands- based Staalplaat and USA- based Soleilmoon recording labels. All three labels came to the fore as part of 1980s cassette culture.

In 1990–92 Nocturnal Emissions collaborated on Butoh dance performances in Europe & the USA, with the Japanese choreographer Poppo Shiraishi. Around this time Nocturnal Emissions' Situationist-influenced practice became increasingly informed by magick, stone circles, techno–shamanism, neo-paganism, animism and Fortean research. There were many collaborations on animated films by Mancunian TV director Charlotte Bill. Bill was never an official member of Nocturnal Emissions, but admits to being one of the legion of members of The Fall (band) .

However, at the height of their success, the Emissions decided to shun the crass commercialism that had developed around them, and to develop their work as a secret alchemy. Nigel Ayers has continued to work with a strong underground of cult support, avoiding music industry fashions, and following his own creative path he concentrated on creating a strong sense of a wilderness identity through sound.

Nocturnal Emissions were later to be associated with the Kernow section of the Association of Autonomous Astronauts
and to feature in a best-selling story by the novelist Stewart Home.

A rhythmic urge, reminiscent of the loudest of discos, weaves throughout the proceedings as the typical barrage of sound crunches through on top. NE have taken their inaccessible best and thrown it into the melting pot with a set of pumping rhythms. The result is the frustrated son of mutant disco. That overused term has given birth to an even more mutated slant on the black American beat.

Mood music for the intelligently subversive, a chorus of tingling memories thrashing against that driving, never ending beat. But this is not sell out! No mere commercial alternative, just the opposite. NE use the accepted areas of the dance idiom and reshape the rules by introducing just about everything that, in theory, shouldn’t be there. If they’re dancing in hell, which I’m sure they are, it must be to music like this. 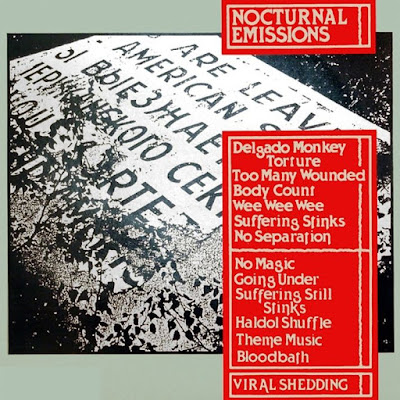 This Nocturnal Emission album is divided into two tracks for the CD which correspond to the two sides of the original record. earlier  all of the tracks were separate and had names. This makes it difficult to search through and find specific tracks.
It works in an odd way, however, because like many early 1980s industrial bands Emissions had two styles, one percussive and aggressive, the other electronic and disturbing.
Track one starts with the blending of synth sounds with screams and lots of scraping/pounding of metal, sometimes the sounds are indistinguishable from one another. It evolves into the band's favorite device... the tape loop and sounds from other sources cut together. All of this makes you feel that you've either entered the mind of a madman, or it can really annoy you.

Track two is the sort of nightmare disco sound that eventually evolved into techno and is really the best stuff on the record. I can do without the final track on the album, slow and dreary, but the rest is pretty good. Back when this record first came out-early 1980s, it was a welcome attempt at doing an industrial theme record like SPK had done. Emissions was very much into animal rights so the theme was stopping animal torture. 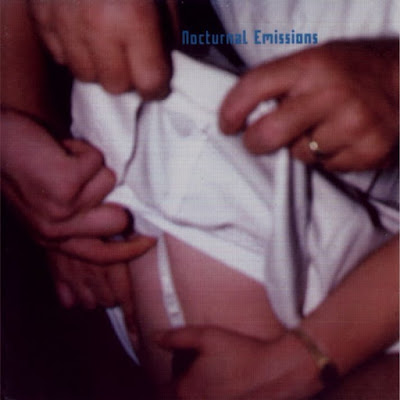 Nocturnal Emissions -  Drowning In A Sea Of Bliss (flac 282mb)

This was a "cusp" record for Nocturnal Emissions, marking the end of a period of more "conventional" songwriting and instrument use. Love and Revolution was the most explicitly "message"-oriented and political. This is a tough record to peg, so maybe trying is besides the point. Nigel Ayers is a pretty smart egg -- check out his Network News for some real quasi-Fortean fun -- so what comes off the disc seems at first glance incredibly doctrinaire and stodgy. "Cops, lawyers and journalists [hey...!] are lying dead all around. There's no one left to judge us. Their iron facade has rusted!" he sings on Power of Love (Bring Power to its Knees), and you get the impression that he's pitching the whole thing so that the people who will take it straight will take it straight and the people who will consider it a tongue-in-cheek piss-take will take it as exactly that. Which is either massively clever or an incredibly pathetic dodge -- I'm still not entirely sure about that. But one thing I do know: put aside the politics, however middle- or no-brow they may be, and what you have here is one extremely neat piece of no-budget sonic rabblerousing. The equipment used on the record is incredibly primitive -- the ramshackle sound makes it all the more lovable, actually -- but everything's used with care and intelligence, and each piece is made to matter. Ayers has said something to the effect that a toy instrument shoved through a massive PA can get better results than a $2,000 synth any day. I guess it all depends on who's doing the shoving, right? 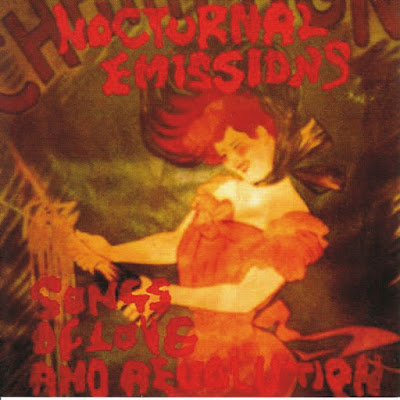 The World Is My Womb comes from the beginning of their "NEotantic" style, pursued on later releases Spiritflesh (1988) and Invocation of the Beast Gods (1989). Nigel Ayers and his longtime partner Caroline K were then making quasi-ceremonial music, after their founding noise and band-oriented albums.  In music and spoken word pieces Sealing A Phase, Vegetation Narration, and Blended Senses Nigel Ayers (rather seriously and dryly) spelled out his new age philosophy - part gnostic holistics, part tantric imagery - while staying traditional when borrowing religious Church Of England signifiers (organ sounds and liturgical chants) on tracks like Clear Bells and the prayer-sampling Lighten Our Darkness. Mixing the old with the new is also the feel of Jangled Senses where a simple piano melody recalls an old time hymn, while ringing bells signal something more revealing. 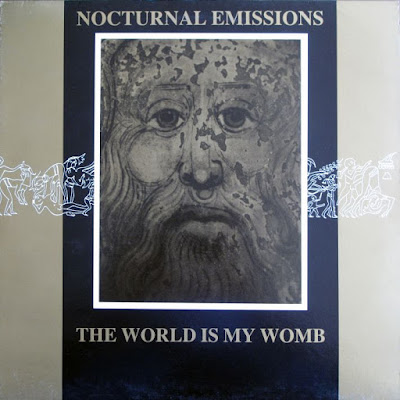 Nocturnal Emissions - The World Is My Womb  (flac  178mb)

Many thanks for these. Can't seem to get a download link for The World is My Womb for some reason, though, just to let you know.

The link is dead. Can you upload again, please? (in ogg?)

Thanks for all the great music. Had never heard of Nocturnal Emissions, but sounds really interesting. Unfortunately, The Songs of Love and Revolution link is down. Any chance of reupping?

Many thanks! Especially "Songs Of Love And Revolution" is a.. revelation ;-)

However, the links for "The World Is My Womb" are all down again. Any chance of re-upping it? Thanks.

Any chance of reupload ?
Thanks