Hello, clearly only the draw can prevent this years Champions final between Bayern Munich and Barcelona, these teams are more than a cut above the rest, both humilated the no 2 in their poule tonight. Enough said, the fascist Turks play with fire downing a Russian plane because it crossed a land tongue (20 seconds wide) but more because it bombed their favorite oil smuggling anti Assad terrorists, who finished the job by shooting the parachuted pilots out of the air (a warcrime by disgusting cowards). I hope Putin responds by levelling their hold outs. Meanwhile Turkey barks behind NATO cover, time to kick them out ! This would enable the West to support the Kurds and recognise their deserved independant country.


Looks to me that you are still in need of more industrial..Today's act was originally a band, formed in 1978 by Stapleton, John Fothergill and Heman Pathak. The band has performed in many genres such as avant-garde, experimental, industrial, noise, dark ambient, and drone.. ... N'Joy

A loose experimental project formed in 1978 by Steven Stapleton, Nurse with Wound explored abstract music -- influenced by Krautrock, freewheeling jazz improvisation, and Throbbing Gristle but including a heavy debt to surrealists Dali and Lautréamont -- with an overpowering release schedule of limited-edition albums and EPs. Stapleton worked with an ever-changing list of collaborators during the early years of Nurse with Wound, though Current 93's David Tibet was the only frequent recording companion during the 1980s and '90s.

Nurse with Wound's first three albums (Chance Meeting on a Dissecting Table of a Sewing Machine and an Umbrella, To the Quiet Man from a Tiny Girl, and Merzbild Schwet) reflect a naked, minimalist slant with long periods of quiet suddenly interrupted by guitar chords inspired by the avant-garde wing of psychedelia/jazz-rock, chains, music boxes, and found-sound recordings. By the early '80s, Stapleton had begun to incorporate noisy, abrasive rhythms that put him more in line with contemporary EBM masters like Skinny Puppy and SPK. Though Stapleton continued his surrealist slant, he often moved back to more empty recordings. These works -- beginning with Soliloquy for Lilith in 1988 -- came to light in the context of the growing ambient/electronic movement, however, putting Nurse with Wound squarely in line with music trends for the first time.

Stapleton recorded two split singles with Stereolab during 1995 and continued his hectic, uncompromising release schedule from his base in southern Ireland. In 2005 the double-CD compilation Livin' Fear of James Last offered an overview of their output. That same year the two-CD compilation Judas as Black Moth was released through the Sanctuary label. On May 5, 2005, Stapleton recorded an improvisational live piece in Vienna and released it in 2006 under the title Soundpooling. Tooth, Teeth, Milk, Skin, Teeth was released in mid-2007, while NWW's terrifying 1982 cult classic Homotopy to Marie was reissued on CD just in time for Halloween 2007. Three new albums were issued in 2008: Huffin' Rag Blues, The Bacteria Magnet, and The Continuous Accident. In early 2009, the retrospective Paranoia in Hi-Fi: Earworms 1978-2008 prefaced a slew of new albums including Space Music, The Surveillance Lounge, and May the Fleas of a Thousand Camels Infest Your Armpits.

A collaborative work with krautrock legend Faust was released on CD in 2007 as Disconnected with a vinyl edition carrying additional mixes following in 2008. A NWW album entitled Huffin' Rag Blues, primarily a collaboration with British sound artist Andrew Liles, was issued in 2008 with a companion mini-LP entitled The Bacteria Magnet. A remix of Sunn O)))'s ØØ Void entitled The Iron Soul of Nothing was given a limited release with an expanded reissue of the out-of-print studio album The Man with the Woman Face following. An album of new material entitled The Surveillance Lounge was then released as a CD with a limited triple CD called The Memory Surface. A CD of new material entitled Space Music will be released on 17 November 2009.

A recent collaboration was a result of the chance meeting of Nurse With Wound's Steven Stapleton and Graham Bowers, both artists were appearing at Bangor Sound City's first art/sound event 'Wet Sounds' curated by Joel Cahen located at the Bangor Swimming Pool, North Wales, in January 2011. Both were admirers of each other's past works and felt that a collaboration on a new piece of work could be an interesting and exciting prospect, consequently 'Rupture' is the first full-length work, and is released as a Double Vinyl album/LP, a CD and Download. The Vinyl album and CD have been released through Dirter.

The follow-up to last year's Rupture sees Steven Stapleton and Graham Bowers exploring the inner reaches of the psyche. The thematic work, Parade was released on the interdisciplinary arts group/record label Red Wharf and distributed by Cargo. The third collaboration, ExcitoToxicity was released July 2014, and the fourth, Mutation released March 2015 all through Red Wharf and distributed by Cargo.

The debut Nurse With Wound album lies halfway between the more tuneless explorations of Krautrock and the new industrialism practiced by Throbbing Gristle and Cabaret Voltaire. Across three lengthy tracks, obtuse guitar freak-outs are used to frame distorted synthesizers and mostly rhythm-less drum machines. Though it frequently defies easy analysis, Chance Meeting is one of the more glowing examples of uncompromising industrial-noise of the 1970s. 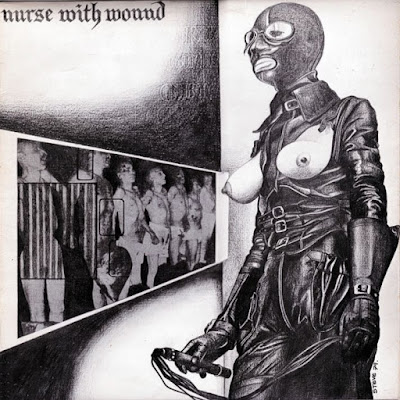 Following on the footsteps of Chance Meeting on a Dissecting Table, To the Quiet Men From a Tiny Girl was Nurse With Wound's second album and shows the group refining itself from the debut and adding a lot more dynamics. The record starts off with the very short "Umbrella Link," really just some guitar riffing from engineer Nicky Rodgers as a concession for N.W.W. to use his recording studio, before segueing into the side-long "She Alone Hole and Open." Along with the clattering and clanking percussion and weird scraping noises and guitar burbles, French avant-jazz giant Jacques Berrocal joined in on pocket trumpet and Stapleton adds some sax squall for results a bit closer to free jazz than the first record. The side-two piece "Ostranenie" throws a bunch of strange voices into the din, and then later on, a creepy music box takes over. Both pieces have quiet moments that contrast with the noisier sections, and the use of editing is more prevalent, though not as advanced as later releases. Some sections ramble on for too long like a lot of early N.W.W., but it's still an intriguing release, if not as fully realized as later works. 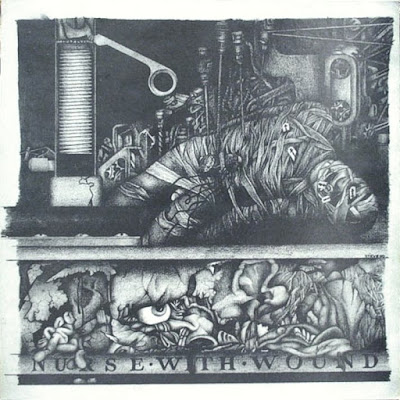 Nurse With Wound began as a trio, but by Merzbild Schwet, its third album, Steve Stapleton's singular vision took over, with no compromises to other band members. As such it can be considered the first fully realized N.W.W. record and is a far more mature effort than its predecessors, much more focused and sounding less like some stoned guys goofing off in the studio. Stapleton's editing techniques come to the fore, with abrupt transitions, quirky juxtapositions, and lots of strange sounds that would become the hallmark of future N.W.W. releases, even as one album might drastically diverge from the next. The first track (or first side of the original LP), "Futurismo" begins with clanking rhythms, record skip clicks, and horn riffs before veering off into a crazed quilt of women singing, laughing, and talking in French. About halfway through, wild screeches of distortion disrupt the piece, and then more bizarre sounds take over before the piece ends with a collage of over-modulated electronic hum and rambling piano. The other cut, "Dada X," goes further into weirdness with lots of silences, creepy creaking noises, tones that build up and collapse, and scattered spoken word in French and English from Eve Libertine from the political punk band Crass, and the piece certainly lives up to the Dada of its title. 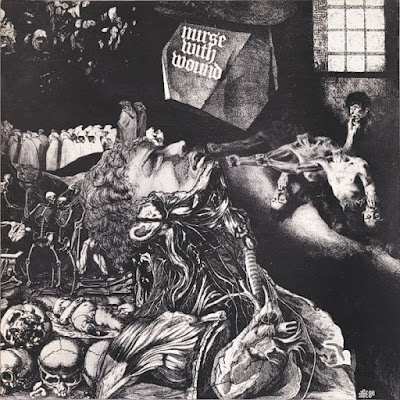 Though Homotopy To Marie is the fifth album by Nurse with Wound, Steve Stapleton has said that he considers it the band's true debut because it's the first one he created by himself. Slowly created over the course of a full year's worth of studio sessions (Stapleton having booked one six-hour block per week for 52 weeks), Homotopy To Marie is no less unnerving and experimental than Nurse with Wound's previous albums, but it's far less chaotic. Stapleton created the album's five songs (four on the original LP; the 12-minute "Astral Dustbin Dirge," recorded during these sessions, was added to the CD editions) almost entirely through tape manipulation, artfully editing miles of audio tape into these lengthy dada-esque soundscapes. It may be more elegantly constructed, but it's just as difficult to penetrate. The opening track "I Cannot Feel You as the Dogs Are Laughing and I Am Blind" opens with a lengthy solo for random metal clanking that sounds like a drawer full of silverware being stirred with an axe handle and then fades into near-total silence for several minutes until a processed vocal wail wanders in, leading to an unexpected noise-burst climax that causes listeners to jump even when they know it's coming. The title track ("homotopy" is a mathematical term for the morphing of one two-dimensional shape into another, incidentally) consists of little more than gong crashes with occasional interjections of whispered voices, atonal violin-like creaks and other small and inexplicable noises. "Astral Dustbin Dirge" lulls the listener into complacency with a lengthy prologue of sounds resembling tape-manipulated whale song before a brief burst of cries and alarms then settles into possibly the most minimalist near-silence of the entire album. The 25-minute epic "The Schmurz (Unsullied by Sucking)" slowly builds into a symphony of feedback and electronic tones alternately droning at irritating frequencies and imitating natural sounds like woodpeckers and rainfall, like a more pastoral version of Lou Reed's Metal Machine Music. After that, the barely 90-second "The Tumultuous Upsurge of Lasting Hatred," a snatch of tape rendered near inaudible followed by several seconds of pure silence, sounds like a lullaby in comparison. While hardly accessible, Homotopy To Marie is at least generally comprehensible in its structures and sounds, and as such one of the most popular starting points in the Nurse with Wound catalogue. [The United Dairies CD reissue of 2008 fixes an indexing error made in the original early 1990s CD release, where the last three minutes or so of track one were inadvertently added to the start of track two. 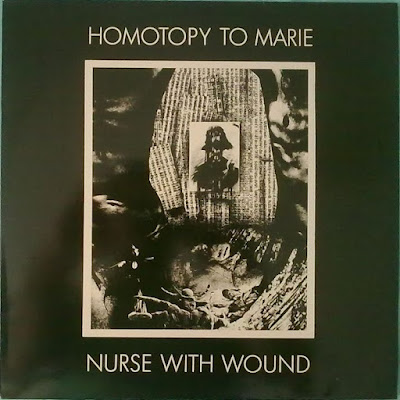 
Thank you for the very generous upload of "Nurse With Wound", (have been after Dissecting Table, for a long time).

hi rho, the fascists are the russians, which bomb the moderat assad enemies. the target of the putin is to destroy all these enemies, at the end we have only the choice between the devil isis and the beelzebub assad.

Hello Anon ever heard of the devil you know ? That's Assad for you and may I remind you that Syria was a reasonably good place to live until the west started stoke. As for Turkey, Erdogan is in all but name a dictator who is dragging the Turks into another Islamic state, he has been actively supporting ISIL buying their oil, selling weaponry and providing medical aid,accommodating ISIL travel to and fro between Europe and Syria, let's not forget bombing the Kurds fighting ISIL. But hey he's our friend (like Saddam once was). And Turkey is in NATO and apparently that gives you the right to shoot down a russian fighter cause it bombs your terrorist friends. Meh standard muslim cowards hiding behind NATO, or maybe you think Erdogan would have dared this without that.

Any chance you could re-load HTM - the maxmirror links are poop for this title. Greatly appreciate the blog btw. Best, MC

Links for Homotopy To Marie are dead Rho...any chance you could renew? Thanks :)

If you go thru the motions to download on zippysher you get;

description The requested resource is not available.

And with mightyupload you get;

This web page is not available

All the other options are shown as 'not available'