Today's artists has been cited as having enjoyed one of the "longest, most influential, and most diverse careers in the pantheon of popular music". .  ... N'joy

First formed in the early '50s, the Isley Brothers enjoyed one of the longest, most influential, and most diverse careers in the pantheon of popular music -- over the course of nearly a half century of performing, the group's distinguished history spanned not only two generations of Isley siblings but also massive cultural shifts which heralded their music's transformation from gritty R&B to Motown soul to blistering funk. The first generation of Isley siblings was born and raised in Cincinnati, OH, where they were encouraged to begin a singing career by their father, himself a professional vocalist, and their mother, a church pianist who provided musical accompaniment at their early performances. Initially a gospel quartet, the group was comprised of Ronald, Rudolph, O'Kelly, and Vernon Isley; after Vernon's 1955 death in a bicycling accident, tenor Ronald was tapped as the remaining trio's lead vocalist. In 1957, the brothers went to New York City to record a string of failed doo wop singles; while performing a spirited reading of the song "Lonely Teardrops" in Washington, D.C., two years later, they interjected the line "You know you make me want to shout," which inspired frenzied audience feedback. An RCA executive in the audience saw the concert, and when he signed the Isleys soon after, he instructed that their first single be constructed around their crowd-pleasing catch phrase; while the call-and-response classic "Shout" failed to reach the pop Top 40 on its initial release, it eventually became a frequently covered classic.

Still, success eluded the Isleys, and only after they left RCA in 1962 did they again have another hit, this time with their seminal cover of the Top Notes' "Twist and Shout." Like so many of the brothers' early R&B records, "Twist and Shout" earned greater commercial success when later rendered by a white group -- in this case, the Beatles; other acts who notched hits by closely following the Isleys' blueprint were the Yardbirds ("Respectable," also covered by the Outsiders), the Human Beinz ("Nobody but Me"), and Lulu ("Shout"). During a 1964 tour, they recruited a young guitarist named Jimmy James to play in their backing band; James -- who later shot to fame under his given name, Jimi Hendrix -- made his first recordings with the Isleys, including the single "Testify," issued on the brothers' own T-Neck label. They signed to the Motown subsidiary Tamla in 1965, where they joined forces with the famed Holland-Dozier-Holland writing and production team. Their first single, the shimmering "This Old Heart of Mine (Is Weak for You)," was their finest moment yet, and barely missed the pop Top Ten.

"This Old Heart of Mine" was their only hit on Motown, however, and when the song hit number three in Britain in 1967, the Isleys relocated to England in order to sustain their flagging career; after years of writing their own material, they felt straitjacketed by the Motown assembly-line production formula, and by the time they returned stateside in 1969, they had exited Tamla to resuscitate the T-Neck label. Their next release, the muscular and funky "It's Your Thing," hit number two on the U.S. charts in 1969, and became their most successful record. That year, the Isleys also welcomed a number of new members as younger brothers Ernie and Marvin, brother-in-law Chris Jasper, and family friend Everett Collins became the trio's new backing unit. Spearheaded by Ernie's hard-edged guitar leads, the group began incorporating more and more rock material into its repertoire as the 1970s dawned, and scored hits with covers of Stephen Stills' "Love the One You're With," Eric Burdon & War's "Spill the Wine," and Bob Dylan's "Lay Lady Lay."

In 1973, the Isleys scored a massive hit with their rock-funk fusion cover of their own earlier single "Who's That Lady," retitled "That Lady, Pt. 1"; the album 3 + 3 also proved highly successful, as did 1975's The Heat Is On, which spawned the smash "Fight the Power, Pt. 1." As the decade wore on, the group again altered its sound to fit into the booming disco market; while their success on pop radio ran dry, they frequently topped the R&B charts with singles like 1977's "The Pride," 1978's "Take Me to the Next Phase, Pt. 1," 1979's "I Wanna Be With You, Pt. 1," and 1980's "Don't Say Goodnight." While the Isleys' popularity continued into the 1980s, Ernie and Marvin, along with Chris Jasper, defected in 1984 to form their own group, Isley Jasper Isley; a year later, they topped the R&B charts with "Caravan of Love." On March 31, 1986, O'Kelly died of a heart attack; Rudolph soon left to join the ministry, but the group reunited in 1990.

Although the individual members continued with solo work and side projects, and also experienced misfortune along the way, the Isley Brothers forged on in one form or another throughout the '90s and into the 21st century. In 1996, now consisting of Ronald, Marvin, and Ernie, they released the album Mission to Please; however, Marvin developed diabetes and left the band the following year -- the disease later necessitated the amputation of both his legs. Ronald and Ernie hooked up for the release of 2001's Eternal, a brand-new selection of R&B cuts featuring collaborative efforts with Jill Scott, Jimmy Jam & Terry Lewis, and Raphael Saadiq. On that particular release, Ronald also introduced the alter ego Mr. Biggs. Body Kiss was released in 2003, followed by Baby Makin' Music in 2006, the year after Ronald was convicted of tax evasion charges. Experiencing his own set of serious health issues, Ronald was sentenced to prison and served the latter portion of his sentence at a halfway house in St. Louis, MO before being released in April 2010. On June 6 of that year, Marvin died of complications from diabetes at the age of 56.

The Heat Is On is American soul and funk group The Isley Brothers' thirteenth studio album. The album spent 40 weeks on the US Billboard Pop Albums chart after it's release, garnering the group's first number one album in the U.S. The Heat Is On features singles "Fight the Power (Part 1 & 2)" and "For the Love of You (Part 1 & 2)".
1975's The Heat Is On was the third album that the Isley Brothers recorded with their 3 + 3 lineup, and by that time, the lineup had really perfected its attractive soul/rock sound. The Isleys were providing great R&B long before keyboardist Chris Jasper, bassist Marvin Isley, and the distinctive guitarist Ernie Isley came on board in 1973; nonetheless, the newcomers added a lot to the group and helped it provide some of its best recordings. Marvin's basslines are as funky as it gets, and the Jimi Hendrix-influenced Ernie is a killer guitarist; he would have been perfect for Deep Purple, Blue Oyster Cult, or Judas Priest if the Isley Brothers hadn't kept him busy in the 1970s. One of the 3 + 3 gems that no Isleys fans should be without is The Heat Is On, which is best known for the sweaty funk classic "Fight the Power" and the sexy quiet storm slow jam "For the Love of You." Lead vocalist Ronald Isley is as convincing on the funk scorchers as he is on caressing ballads like "Make Me Say It Again Girl" and "Sensuality." Meanwhile, "Hope You Feel Better Love" is brilliant because it contrasts those two sides of the 3 + 3 lineup -- the verses are sweetly melodic, but the chorus is forceful and explosive. Superb from start to finish, The Heat Is On is among The Isleys' most essential albums. 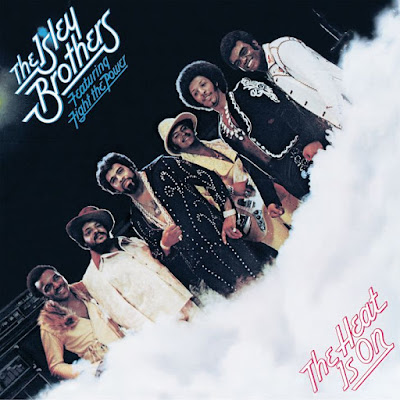 The Isley Brothers came with love, funk and the too seldom mentioned socially consicous songs; this album is titled after one of those social gems. However, "Who Loves You Better," with its disco flair, was the album's first release. Ronald Isley's aggressive delivery blends nicely with Ernie Isley's tantalizing guitar solos. It was a top three single on the Billboard R&B charts. The title track is a tour de force. Preceded by a mellow intro in which Ronald Isley's earnest plea rings with urgency, the timeless lyric and festive rhythm make "Harvest for the World" a welcomed anthem for all the people of the world. It cracked the Billboard R&B top ten at number nine. Ronald Isley changes his tone on some of these compositions by adding a roughness to his still smooth tenor, like on the relentless jams "People of Today" and "You Wanna Stay Down." Then there are those priceless ballads like "Let Me Know" and "Let Me Down Easy"; Ronald Isley sweetly caresses the lyric with compassion and agility. Neither of these two selections were releases but remain staples on R&B radio. 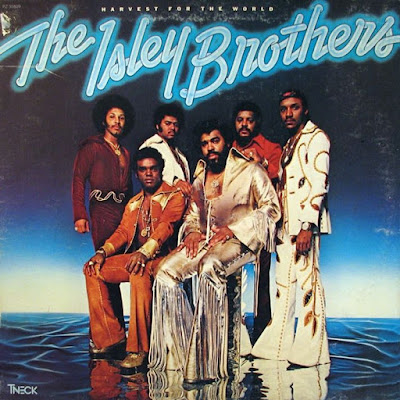 The Isley Brothers - Harvest for the World  (flac 290mb)

The Isley Brothers - Harvest for the World  (ogg 112mb)

Every ten years the Isley Brothers reinvented themselves and managed to snatch as many consumer dollars and generate enough chart action to remain contemporary. Go for Your Guns was a further attempt by the Isleys to broaden their fan base; earlier in the decade they redid many rock standards to expand from the R&B base they were mired in. the Isleys shoot for the moon and never make it, but they always land among the stars. This seven-song set got played to death on urban radio. "Living in the Life" rocks so hard it makes cheap speakers pop; "Go for Your Guns" is an instrumental jam featuring the second generation Isley Brothers: Ernie, Marvin, and Chris Jasper (Rudolph Isley's brother-in-law). The lovely, mystical "Voyage to Atlantis" is a staple of their live concerts, its opening strains acknowledged by deafening, enthusiastic applause. Like many Isley tunes, the loping, mid-tempo love tale "Footsteps in the Dark" has been sampled silly; "Pride" is a steady beater with uplifting words for the downtrodden. Nothing dull, no filler. 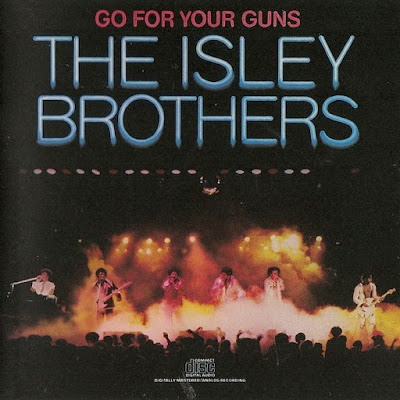 These are the first offerings from the Isley Brothers' T-Neck record label, and many consider special because Jimi Hendrix played lead guitar on them. However, these tracks bombed as singles. "Testify" is noisy and congested, too much is going on. Hendrix's guitar is prominent, and identifies him as conclusively as a DNA sample. The Isleys imitate popular singers Stevie Wonder, Ray Charles, and James Brown on "Testify," but the imitations are weak and sound like clones of each other. "Move Over and Let Me Dance" has some of "Testify"'s problems but works a little better, it has a danceable groove and a much better hook. The only soft selection is "The Last Girl," which has an airy sound, and features a rare laid-back vocal from Ron Isley during this phase of his career. Hendrix fans will love this, but fans of the Isleys' later stuff will not be impressed. 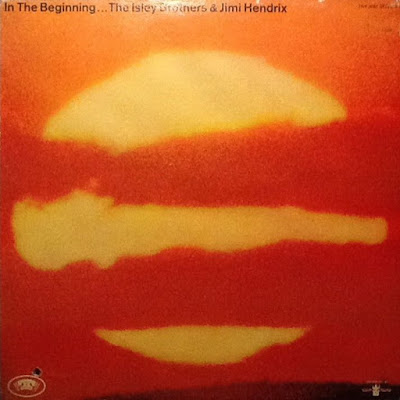 Thanks again, these are better than I remembered. Good re-ups too - lots of good dub I passed by way back when. -HD