Hello,  dear oh dear Glamourboy Hamilton had almost have his victory at Monza snatched from his manicured hands, tire pressure a tic too low. I suppose that would be harsh as he really didnt need this extra grip. Anyway it gave the FIA a chance to prove that Ferrari doesn't call all the shots there. Meanwhile Hamilton's only needs to stay alive to win this years championship..In the Vuelta there's still 5 guys riding around who seriously think they can win it, an exiting final week coming up there. As for the US tennis apparently it 's been so hot some competitors almost dropped dead, but for the big boys it's making life easier as they tend to spent the least energy during a match. It will be Djokovic vs Federer in the final, and Butch Williams will undoubtly pick up the biggest paycheck as usual at the female side..


Today a series that will be running into the new year, 24 episodes of Elvenquest. It's is a sitcom about a misanthropic writer of fantasy novels who finds himself whisked away into a parallel universe by an elf, a dwarf and a warrior princess, where he must undertake to find the Sword of Asnagar in order to save Lower Earth from the evil Lord Darkness before he can get home. Today the end of Season 1 (cliffhanger alert !) no need to wait a year, next week season 2 starts. 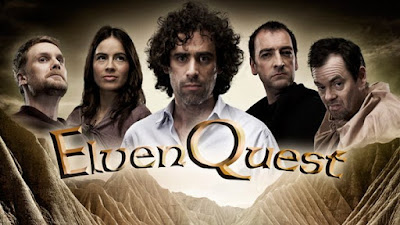