Hello, not much of pleasent spring weather around this year but that's ok our glaciers are melting too fast already, that said it looks like some shorts-weather coming up next week.hmm. So Contador won his Giro without winning a stage, he was accompanied on the podium by two Astana riders who each had won 2 stages, yes it was quiet a giro this year. There's Grand slam tennis in Paris without much of an upset thusfar although Federer did loose his first set today but then it was raining. Meanwhile the refugees have discovered its far easier to get to Europe via the greek islands in front of the Turkish coast..... Even further east the Chinese smoker (all 300 million of them) is no longer alowed to enjoy his/her fag in a public place since today hmm we like our short sighted short of breath china man...


This week, Return of the Jedi !


At first, the idea seems bizarre, even ridiculous. Star Wars, a movie best known for its vistas of alien worlds and epic battles. Well, unless you have the cold heart of a Sith, Star Wars did indeed translate well from the silver screen to radio, thank you very much. Yes, Star Wars' visual effects are a big part of the magic of the saga, but the heart and soul of George Lucas' galaxy far, far away are the characters and the storyline. And while the movie is satisfying on its own, the radio dramatization written by the late Brian Daley takes us beyond the movie....beyond the screenplay...and even beyond the novelization. 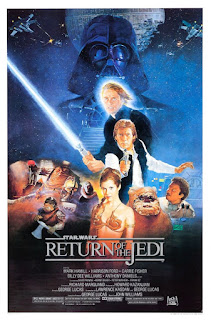 NPR's plans for a Return of the Jedi radio serial were put on hold when federal funding for NPR was dramatically reduced. It was not until 1996 that a six-part adaptation of Return of the Jedi was made by Highbridge Audio, the company that had released the first two series on tape and CD.

Like the preceding series, Return of the Jedi expanded its story by incorporating new scenes, such as Luke Skywalker's construction of a new lightsaber.

Scriptwriter Brian Daley died shortly after recording concluded; "additional material" was contributed by John Whitman, who introduced changes required for continuity with the now-planned prequels, as well as changes identified by the director and cast.

The episodes are titled:
"Tatooine Haunts"
"Fast Friends"
"Prophecies And Destinies"
"Pattern And Web"
"So Turns A Galaxy, So Turns A Wheel"
"Blood Of A Jedi"

The adaptation used many of the original radio cast, though Joshua Fardon took over as Luke and Arye Gross replaced Billy Dee Williams as Lando. Ed Begley, Jr. was the voice of Boba Fett and Edward Asner, speaking only in Huttese, voiced Jabba the Hutt. The only actor who starred in all the feature films as well as the radio dramas was Anthony Daniels.