Hello, yes it was cupfinal's night in Europe, in the UK Arsenal walked all over Aston Villa  4-0 , in Germany an initial superior Borrussia Dortmund got beaten by the Volkswagen team Wolfsburg 1-3...No happy end for the Dortmund coach Jorgen Klopp after 7 successful years. In France it seemed hardly a contest possible between the second division Auxerre and PSG, yet the French champions maneged just the one goal 1-0. Such won't happen to a team with Messi in it Barca cruised to a 3-1 win over Bilbao. They are ready to pic up the big one next week, Juventus will have a tough time against Messi and co..


Today a band that has exerted a relatively large influence on later space rock and krautrock bands.  .... N'joy

Along with Tangerine Dream, Ash Ra Tempel (later Ashra) was one of the first bands to convert the trippier side of late-'60s psychedelia into the kosmische rock of the '70s. Most Ash Ra titles were solely the work of Manuel Göttsching, plus any other additional players who happened to be around during the recording of his ten albums. Göttsching trained in classical guitar and studied improvisational music plus electronics at school. In 1970, he formed Ash Ra Tempel with no less than Klaus Schulze (fresh from a brief stint in Tangerine Dream) and Hartmut Enke. All three founding members had previously played together as part of the short-lived group Eruption founded by Conrad Schnitzler. Prior to that Schnitzler and Schulze had worked together in Tangerine Dream.  After a self-titled album in 1971, Schulze left for a solo career; Göttsching continued on with a variety of bandmembers and guests, including Timothy Leary on 1973's Seven Up (and Schulze again, for Join Inn).

Ash Ra Tempel released its self-titled debut album in June 1971. This release is considered by critics to be a classic of the genre; Schulze temporarily departed for a solo career shortly after its release. Schwingungen (1972), Seven Up (with Timothy Leary) (1972), and Join Inn with Schulze again (1973) are all considered key works from the band. The pop-oriented 1973 album Starring Rosi was thus named because it featured lead vocals by Rosi Mueller.

Their music is widely characterized as cosmic and atmospheric. The early albums were more psychedelic-oriented and all had one lengthy track per side: one more powerful and dramatic, the other of a more atmospheric nature. Instead of writing English lyrics, since German language was not popular in rock music at the time, Ash Ra Tempel more or less decided not to have lyrics in their songs.

By 1975, Göttsching had released his first solo album (Inventions for Electric Guitar) and though Ashra returned the following year, the next two records by the "group" were Göttsching-only albums, the brilliant New Age of Earth in 1976 and Blackouts one year later. For the 1980s, most Ashra LPs were band-setting albums (with the assistance of guitarist Lutz Ulbrich and drummer Harald Grosskopf) while Göttsching solo records (like the landmark E2-E4) were, truly, solo records. He also reunited with Schulze to work on Alphaville's 1989 LP, The Breathtaking Blue.


Later, after recording the soundtrack Le Berceau de Cristal (1975; unreleased until 1993) Ash Ra Tempel shortened its name to Ashra, making a more melodic, synthesizer-based music. In 2000 the band was reunited in the line up of Manuel Gottsching and Klaus Schulze. The pair had previously worked together on Schulze's album In Blue.

In light of the 1990s post-rock scene and the often clear links back to Krautrock of all stripes, Ash Ra Tempel's monster debut album stands as being both astonishingly prescient and just flat out good, a logical extension of the space-jam-freakout ethos into rarified realms. Featuring the original trio of Enke, Gottsching and Schulze, Ash Ra Tempel consists of only two side-long tracks, both of which are gripping examples of technical ability mixed with rock power. If more progressive music was like it, there wouldn't be as many continuing complaints about that genre as a whole. "Amboss" contains the more upfront explosions of sound, though it mixes in restraint as much as crunch. Starting with Gottsching's extended guitar notes and Schulze's cymbals, it begins with a slow, ominous build that is equally haunting, as mysterious as the cryptic artwork of temples and figures found on the inside. Quick, rumbling drums slowly fade up some minutes in, with more crashing guitar mixing in with the previous tones, creating a disorienting drone experience. The active jam then takes over the rest of the song at the point, the three going off just as they want to (Gottsching's soloing in particular is fantastic) before all coming back together for an explosive, shuddering series of climaxes. "Traummaschine," in marked contrast, is a quieter affair, with Gottsching's deep drones setting and continuing the tone throughout. Fading in bit by bit, the guitars are accompanied by equally mesmerizing keyboards from Schulze, creating something that calls to mind everything from Eno's ambient works to Lull's doom-laden soundscapes and, after more distinct guitar pluckings start to surface, Flying Saucer Attack's rural psychedelia. Halfway through, soft percussion blends with the music to create a gentle but persistent intensity, cue for a series of shifts between calmer and more active sections, but all kept more restrained than on "Amboss." 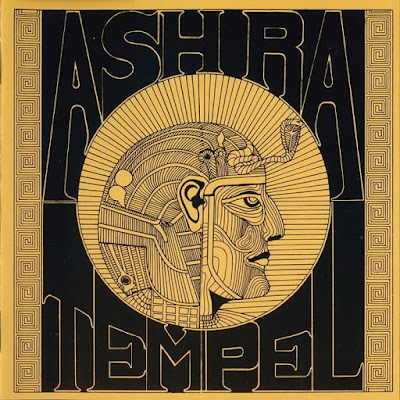 Ash Ra Tempel's second album featured the first of several personnel changes, Klaus Schulze having departed for other realms and replaced as a result by Wolfgang Muller. A few guest players surfaced here and there as well, with one John L. taking the lead vocals -- another difference from the self-titled debut, which was entirely instrumental. The general principle of side-long efforts continued, though the first half was split into two related songs, "Light" and "Darkness." "Light" itself sounded halfway between the zoned-out exploration of "Traummaschine" and bluesy jamming, a weird if not totally discordant combination that still manages to sound more out there than most bands of the time. Gottsching's fried solo, in particular, is great, sending the rest of the song out to silence that leads into "Darkness." Said song initially takes a far more minimal approach that bears even more resemblance to "Traummaschine," fading out almost entirely by the third minute before a full band performance (including Uli Popp on bongos and Matthais Wehler's sudden alto sax bursts) slowly builds into a frenetic jam. John L.'s vocals become echoed screams and yelps not far off from Damo Suzuki's approach in Can, and the overall performance is a perfect slice of Krautrock insanity, sudden swirls of flanging and even more on-the-edge solos from Gottsching and Wehler sending it over the top. "Suche & Liebe" takes up the entire second side, the performers this time around concentrating on the quiet but unsettling approach, Gottsching's massive soloing kept low in the mix but not so much that it doesn't freak out listeners. The song concludes on an almost conventionally pretty band jam, something that could almost be Meddle-era Pink Floyd, only with even a more haunting, alien air thanks to the wordless vocal keening. 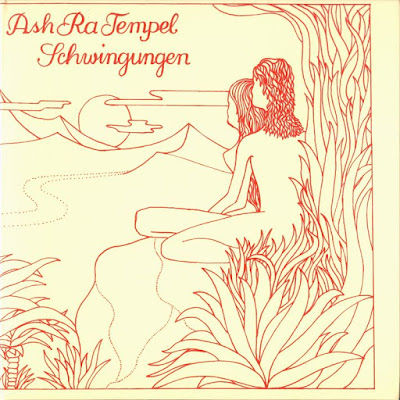 Even with the presence of special guest Timothy Leary, Seven Up sticks to its predecessor's penchant for bizarre, bluesy psychedelia on the first side while the second takes off into the deepest realms of space rock. Fans of Leary may be a bit surprised, since he's but one of the five voices sprinkled throughout the album and sounds more like a poor man's Eric Burdon than an acid visionary might on tracks like "Right Hand Lover," "Downtown," and "Power Drive." Side two consists of three drawn-out space jams that conclude with a rushing of air quite close to a vacuum cleaner. Except for the last bit, Seven Up is not quite the meeting of minds that acid and Kraut fans expected. 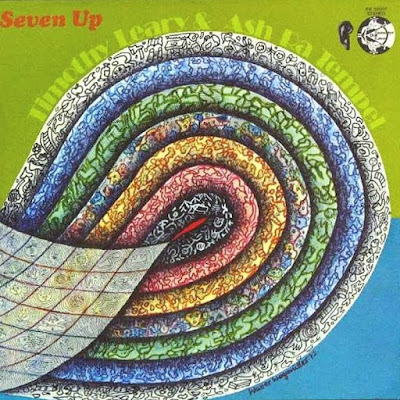 Ash Ra Tempel's fourth LP marked something of a pause, a recap, especially after the surprising Seven Up (which featured Timothy Leary as a guest). The temporary return of Klaus Schulze also greatly contributes to this feeling of summation. The album features two side-long pieces that represent literally two sides of the band, the Krautrock and space music incarnations. "Freak 'n' Roll" is a 19-minute hard-hitting jam, with Schulze bashing away behind the drums and Manuel Göttsching churning some mean guitar riffs while Harmut Enke ploughs heavy basslines. The track is actually an excerpt from a longer improvisation and begins with a fade in that throws the listener in the middle of an already heated session. Long but hardly long-winded, this track deserves a place alongside Can's "You Do Right" and Faust's "Krautrock": it has the drive, the psychedelic appeal, and the creativity of what epitomized the Krautrock style in the minds of young Englishmen and Americans for a while. The 24-minute "Jenseits" sees Schulze at the Synthi A and the organ, weaving dreamy drones and uplifting chords for Göttsching to doodle over. Enke's lines are not always as relevant as one would wish, and Rosi Mueller's soft-spoken narration seems to get in the way during the first few minutes -- in short, this is not Ash Ra Tempel at their ethereal best, but it's still a fine exercise in late-night musical dreaming that will appeal to fans of Phaedra-era Tangerine Dream while not misrepresenting that aspect of the group's work. And put together, those two pieces make a very fine introduction to the first few years of Ash Ra Tempel. 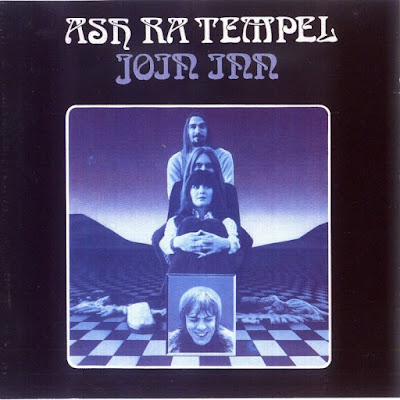 Does this mean we might be seeing E2-E4 in the near future?

As it happens Anon i posted E2-E4 2nd of November 2008 but that link is dead now anyone can ask to re uploading anything that's been posted here.....

Yes, these Ash Ra albums have kept me warm over the decades (as have the later albums as Ashra for that matter!). One album that often gets overlooked in their 1975 soundtrack to the Philippe Garrel film 'Le Berceau De Cristal' which I think personally is one of their best works (and some tracks sound curiously 'modern' given it was made 40 years ago!) - it gets overlooked because it was first released in 1993 (I am pretty sure there wasn't a release before then, but I could be wrong).

If you don't have it let me know, I have a FLAC copy kicking around.

Chapeau for these excellent posts, thanks!!!!

The credits for the Ashra CD comments go to the author and the author is Ned Ragett!

Dear Rho, would it be possible for you to re-upload Ash Ra Tempel - Ash Ra Tempel (1971)?
Once again, thank you kindly for all of your lovely, admirable work!

I don't think this post was ever reuploaded in 2019, hence I want to ask if you could reup it.