Hello, it was a clear day, the german airplane checked, the model the most popular and reliable in the world, the captain with 10 years experience, the direction as it should be until the end, the result a mysterious crash after an 8 minutes descent towards death...it must have been awful..

Today in the spotlight, a band often cited as the first band to define the punk rock sound. Despite achieving only limited commercial success, the band was a major influence on the 1970s punk movement in both the United States and United Kingdom. All of the band members adopted pseudonyms ending with the surname "Ramone", although none of them were related. The coming weeks here to N'Joy
xxxxx xxxxx xxxxx xxxxx xxxxx

The original members of the band met in and around the middle-class neighborhood of Forest Hills in the New York City borough of Queens. John Cummings and Thomas Erdelyi had both been in a high-school garage band from 1966 to 1967. They became friends with Douglas Colvin, who had recently moved to the area from Germany. The Ramones began taking shape in early 1974, when Cummings and Colvin invited Hyman to join them in a band. The initial lineup featured Colvin on lead vocals and rhythm guitar, Cummings on lead guitar, and Hyman on drums. Colvin, who soon switched from rhythm guitar to bass, was the first to adopt the name "Ramone", calling himself Dee Dee Ramone. He convinced the other members to take on the name and came up with the idea of calling the band the Ramones. Hyman and Cummings became Joey Ramone and Johnny Ramone, respectively.

Johnny's former bandmate Erdelyi was set to become their manager. Soon after the band was formed, Dee Dee realized that he could not sing and play his bass guitar simultaneously, thus Joey became the band's new lead singer. Dee Dee would continue, however, to count off each song's tempo with his signature rapid-fire shout of "1-2-3-4!" Joey soon similarly realized that he could not sing and play drums simultaneously and left the position of the drummer. While auditioning prospective replacements, Erdelyi would often take to the drums and demonstrate how to play the songs. It became apparent that he was able to perform the group's music better than anyone else, and he joined the band as Tommy Ramone.

Around this time, a new music scene was emerging in New York centered around two clubs in downtown Manhattan—Max's Kansas city and, more famously, CBGB (usually referred to as CBGB's). The Ramones made their CBGB debut on August 16 74. The band swiftly became regulars at the club, playing there seventy-four times by the end of the year. After garnering considerable attention for their performances—which averaged about seventeen minutes from beginning to end—the group was signed to a recording contract in late 1975 by Seymour Stein of Sire Records. By this time, the Ramones were recognized as leaders of the new scene that was increasingly being referred to as "punk".

The Ramones recorded their debut album, Ramones, in February 1976. While the songwriting credits were shared by the entire band, Dee Dee was the primary writer. Ramones was co-produced by Tommy and Craig Leon on an extremely low budget of about $6,400 and released in April. Ramones was not a commercial success, reaching only number 111 on the Billboard album chart. The two singles released from the album, "Blitzkrieg Bop" and "I Wanna Be Your Boyfriend", failed to chart. At the band's first major performance outside of New York, approximately ten people showed up. It wasn't until they made a brief tour of England that they began to see the fruits of their labor; a performance at The Roundhouse in London on July 4, 1976 was a resounding success.

Their next two albums, Leave Home and Rocket to Russia, were released in 1977. Both were coproduced by Tommy and Tony Bongiovi. Leave Home met with even less chart success than Ramones. Rocket to Russia was the band's highest-charting album to date, reaching number 49 on the Billboard 200. The Ramones recorded It's Alive, a live concert double album, at the Rainbow Theatre, London, which was released in April 1979.

Tommy, tired of touring, left the band in early 1978. He continued as the Ramones' record producer under his birth name of Erdelyi. His position as drummer was filled by Marc Bell, He became Marky Ramone. Later that year, the band released their fourth studio album, Road to Ruin. The album, co-produced by Tommy with Ed Stasium, included some new sounds such as acoustic guitar, several ballads, and the band's first two recorded songs longer than three minutes. It failed to reach the Billboard Top 100.

After the band's movie debut in Roger Corman's Rock 'n' Roll High School (1979), renowned producer Phil Spector became interested in the Ramones and produced their 1980 album End of the Century. Though it was to be the highest-charting album in the band's history—reaching number 44 in the United States and number 14 in Great Britain—Johnny made clear that he favored the band's more aggressive punk material. Pleasant Dreams, the band's sixth album, was released in 1981. It continued the trend established by End of the Century, diluting the rawer punk sound showcased on the band's initial three albums. Slick production was again featured, this time provided by Graham Gouldman (10cc). Another futile attempt to get airplay on American radio. Subterranean Jungle, produced by Ritchie Cordell and Glen Kolotkin, was released in 1983. The album peaked at number 83 in the United States, it would be the last album by the band to crack the Billboard Top 100.

One would expect the band to collapse and in a sense it did several drummers went and came (back) by 1989 founder member Dee Dee left the band after the recording of their tenth studio album, Brain Drain, co-produced by Beauvoir, Rey, and Bill Laswell.He was replaced by Christopher Joseph Ward (C.J. Ramone), who performed with the band until they disbanded.

After more than a decade and a half at Sire Records, the Ramones moved to a new label, Radioactive Records. Their first album for the label was 1992's Mondo Bizarro, which reunited them with producer Ed Stasium. Acid Eaters, consisting entirely of cover songs, came out the following year. In 1995, the Ramones released ¡Adios Amigos!, their fourteenth studio album, and announced that they planned to disband if it was not successful. Its sales were unremarkable, garnering it just two weeks on the lower end of the Billboard chart. The band spent late 1995 on what was promoted as a farewell tour. However, they accepted an offer to appear in the sixth Lollapalooza festival, which toured around the United States during the following summer. After the Lollapalooza tour's conclusion, the Ramones played their final show on August 6, 1996, at the Palace in Hollywood. A recording of the concert was later released on video and CD as We're Outta Here !

Joey, who had been diagnosed with lymphoma in 1995, died of the illness on April 15, 2001, in New York. In 2002, the Ramones were inducted into the Rock and Roll Hall of Fame, which specifically named Dee Dee, Johnny, Joey, Tommy, and Marky. The ceremony was one of Dee Dee's last public appearances; on June 5, 2002, two months later, he was found at his Hollywood home, dead from a heroin overdose. End of the Century: The Story of the Ramones, a Ramones documentary, came out in 2004. Johnny, who had been privately battling prostate cancer, died on September 15, 2004, in Los Angeles, shortly after the film's release. Remaining are the Ramones who played drums over the years, Tommy, Marky, Richie and Elvis,meanwhile Tommy (Tom Erdelyi, born January 29, 1952, died July 11th, 2014).

With the three-chord assault of "Blitzkrieg Bop," The Ramones begins at a blinding speed and never once over the course of its 14 songs does it let up. The Ramones is all about speed, hooks, stupidity, and simplicity. The songs are imaginative reductions of early rock & roll, girl group pop, and surf rock. Not only is the music boiled down to its essentials, but the Ramones offer a twisted, comical take on pop culture with their lyrics, whether it's the horror schlock of "I Don't Wanna Go Down to the Basement," the gleeful violence of "Beat on the Brat," or the maniacal stupidity of "Now I Wanna Sniff Some Glue." And the cover of Chris Montez's "Let's Dance" isn't a throwaway -- with its single-minded beat and lyrics, it encapsulates everything the group loves about pre-Beatles rock & roll. They don't alter the structure, or the intent, of the song, they simply make it louder and faster. And that's the key to all of the Ramones' music -- it's simple rock & roll, played simply, loud, and very, very fast. None of the songs clock in at any longer than two and half minutes, and most are considerably shorter. In comparison to some of the music the album inspired, The Ramones sounds a little tame -- it's a little too clean, and compared to their insanely fast live albums, it even sounds a little slow -- but there's no denying that it still sounds brilliantly fresh and intoxicatingly fun.

Of course the Ramones' second album, Leave Home, is simply more of the same -- 14 songs, including one oldie ("California Sun"), delivered at breakneck speed and concluding in under a half-hour. the Ramones have gotten slightly poppier, occasionally delivering songs like "I Remember You" that are cloaked neither in irony nor seedy rock & roll chic. Still, the biggest impressions are made by the cuts that strongly recall the debut, whether it's the ersatz Beach Boys of "Sheena Is a Punk Rocker," the singalong of "Pinhead," or the warped anthems "Gimme Gimme Shock Treatment" and "Commando." Song for song, it's slightly weaker than its predecessor, but the handful of mediocre cuts speed by so fast that you don't really notice its weaknesses until after it's all over. 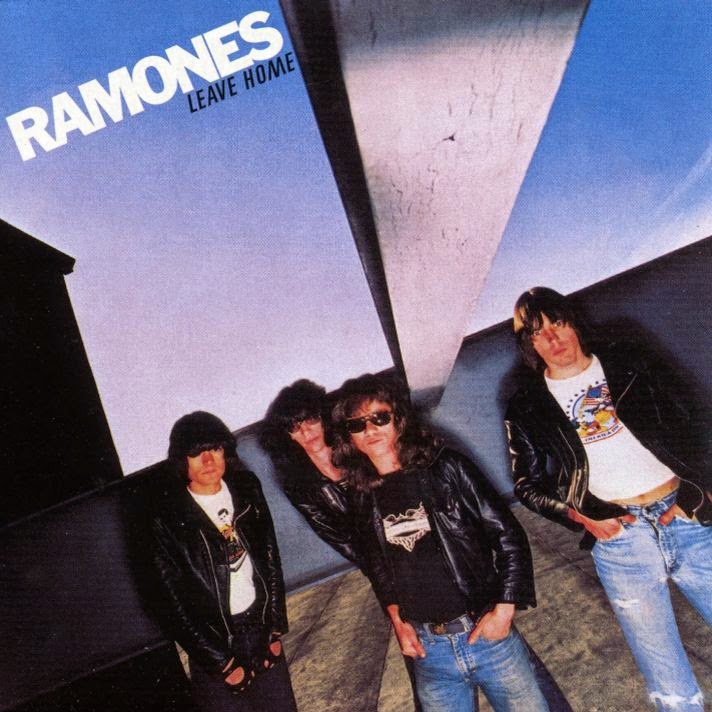 The Ramones provided the blueprint and Leave Home duplicated it with lesser results, but the Ramones' third album, Rocket to Russia, perfected it. Rocket to Russia boasts a cleaner production than its predecessors, which only gives the Ramones' music more force. It helps that the group wrote its finest set of songs for the album. From the mindless, bopping opening of "Cretin Hop" and "Rockaway Beach" to the urban surf rock of "Sheena Is a Punk Rocker" and the ridiculous anthem "Teenage Lobotomy," the songs are teeming with irresistibly catchy hooks; even their choice of covers, "Do You Want to Dance?" and "Surfin' Bird," provide more hooks than usual. the Ramones also branch out slightly, adding ballads to the mix. Even with these (relatively) slower songs, the speed of the album never decreases. However, the abundance of hooks and slight variety in tempos makes Rocket to Russia the Ramones' most listenable and enjoyable album -- it doesn't have the revolutionary impact of The Ramones, but it's a better album and one of the finest records of the late '70s. 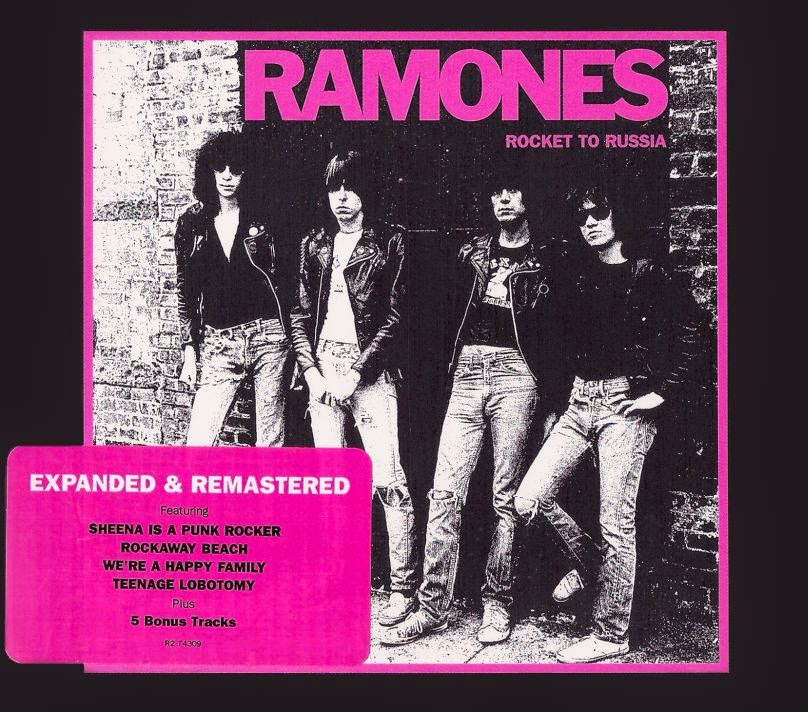 I'd like to be surfing on a "Rocket To Russia", again.

All the best and thank you so much!

ramones for ever and for me. any chance to have links on FREE for example, jm