Hello, it's Oscar night, funny thing it's raining in LA they prayed for that all year just not now.. Anyway i'm not sure who tought it a good idea to have a plain 6 ft2 black woman interview the stars, she really towers over all of them, it's embarrassing. Ok i found out shes called Robin Roberts and according to IMDB she's 5' 10" and i say no way or she's on 6" stilts. In a way all this makes it even worse or who knows all this is a deliberate way to put down the stars. And all those add breaks-mindboggling for one who rarely gets confronted by that shite...

At first, the idea seems bizarre, even ridiculous. Star Wars, a movie best known for its vistas of alien worlds and epic battles, as a 13 part radio drama? Well, unless you have the cold heart of a Sith, Star Wars did indeed translate well from the silver screen to radio, thank you very much. Yes, Star Wars' visual effects are a big part of the magic of the saga, but the heart and soul of George Lucas' galaxy far, far away are the characters and the storyline. And while the movie is satisfying on its own, the radio dramatization written by the late Brian Daley takes us beyond the movie....beyond the screenplay...and even beyond the novelization.

Produced by National Public Radio, with the cooperation of Lucasfilm, Ltd.

When this series was first broadcast on National Public Radio in 1981, it generated the largest response in the network's history: 50,000 letters and phone calls in a single week, an audience of 750,000 per episode, and a subsequent 40-percent jump in NPR listenership.

This landmark production, perhaps the most ambitious radio project ever attempted, began when Star Wars creator George Lucas donated the story rights to an NPR affiliate. Writer Brian Daley adapted the film's highly visual script to the special demands and unique possibilities of radio, creating a more richly textured tale with greater emphasis on character development. Director John Madden guided a splendid cast—including Mark Hamill and Anthony Daniels, reprising their film roles as Luke Skywalker and the persnickety robot See Threepio—through an intense 10 day dialogue recording session. Then came months of painstaking work for virtuoso sound engineer Tom Voegeli, whose brilliant blending of the actors' voices, the music, and hundreds of sound effects takes this intergalactic adventure into a realm of imagination that is beyond the reach of cinema.

By expanding the movie's story beyond its two hour running time, the Radio Drama allows us to catch glimpses of Luke Skywalker's life BEFORE the movie. It tells us how Princess Leia acquired the Death Star plans....and what, exactly, happened to her during her interrogation aboard the Empire's battle station...(it is an interesting scene, but not for the squeamish, by the way). In short, by expanding the story to nearly seven hours, characters we loved on screen acquire depth only equaled by novelizations.

The Radio Drama makes extensive use of material written (and in some cases filmed) for A New Hope's silver screen version but cut for editorial or technical reasons. Also, Ben Burtt's sound effects, John Williams' score, and the acting of Mark Hamill (Luke Skywalker) and Anthony Daniels (See Threepio) give the whole project its "true" Star Wars cachet. 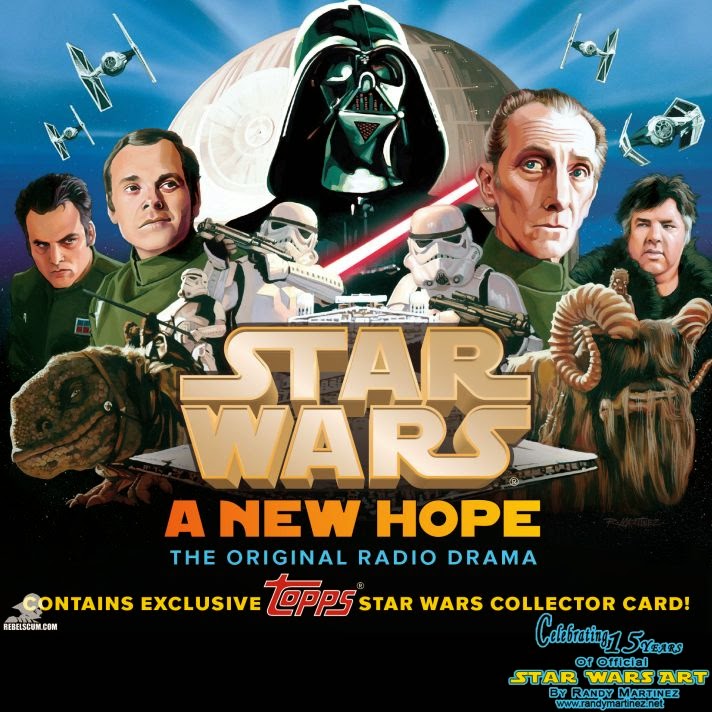