Hello, nothing much happening today, there's a giant storm heading towards Japan, US army evacuated the airplanes hmm. Anyway The Tour de France finished in London alas we were denied the best view of the sprint as a helicopter isn't allowed in Buckingham Palace airspace, clearly the conservative Race cycling didn't consider small drones a pity as it happened the sprintwinner Marcel Kittel was expected. Meanwhile the road back to France was partly blocked today as the Eurotunnel saw a breakdown and consequent chaos...

There's much more music in Nigeria besides Fela Kuti, today in the spotlight the undisputed king of drums.

"The spirit of the drum is something that you feel but cannot put your hands on,

It does something to you from the inside out . . .

It hits people in so many different ways.

But the feeling is one that is satisfying and joyful.

It is a feeling that makes you say to yourself,

Olatunji was born in the village of Ajido, a small town near Badagry, Lagos State, in southwestern Nigeria. A member of the Yoruba people, Olatunji was introduced to traditional African music at an early age. He read in Reader's Digest magazine about the Rotary International Foundation's scholarship program, and applied for it. He received a Rotary scholarship in 1950 and was educated at Morehouse College in Atlanta, Georgia, where he desired to, but never sang in the Morehouse College Glee Club. After graduating from Morehouse, he went on to New York University to study public administration. There, he started a small percussion group to earn money on the side while he continued his studies.

Olatunji won a following among jazz musicians, notably creating a strong relationship with John Coltrane and Columbia Records A&R man John Hammond who signed him to the Columbia label in 1957. With Coltrane's help, he founded the Olatunji Center for African Culture in Harlem. This was the site of Coltrane's final performance. In 1959 Olatunji released his first of six records on the Columbia label, called Drums of Passion.

Olatunji favoured a big percussion sound, and his records typically featured more than 20 players, unusual for a percussion based ensemble. Drums of Passion became a major hit and remains in print; it first opened American ears to the power and spirituality of Nigerian music. In 1969, Carlos Santana had a major hit with the Olatunji tune "Jingo" a cover version recorded for his debut album. (Goldy Rhox 17) Olatunji's subsequent recordings include Drums of Passion: The Invocation (1988), Drums of Passion: The Beat (1989) (which included Airto Moreira and Carlos Santana), Love Drum Talk (1997), Circle of Drums (2005) . Over the years Olatunji recorded with many other prominent musicians aswell.

Olatunji was known for making an impassioned speech for social justice before performing in front of a live audience. His progressive political beliefs are outlined in The Beat Of My Drum: An Autobiography, with a foreword by Joan Baez. He toured the American south with Rev. Martin Luther King Jr and joined King in the march on Washington. Olatunji was also a music educator, and invented a method of teaching and recording drum patterns which he called the "Gun-Dun, Go-Do, Pa-Ta" method after the different sounds made on the drum. Olatunji taught drum and dance workshops year-round starting in the late 1950s. Over the years he presented workshops nationally and internationally at colleges, universities, civic, cultural, and governmental organizations too numerous to list here. He co-wrote, Musical Instruments of Africa: Their Nature, Use and Place in the Life of a Deeply Musical People. He also taught at the Esalen Institute in California from 1985 until shortly before his death in Salinas, California from diabetes in 2003, on the day before his 76th birthday.

Recorded in 1993 but only released in 2005, two years after his death, it's a mystery why this sat in the vault for so long. Here the Nigerian master drummer collaborates with Sikiru Adepoju and Muruga, and the results are as good as anything he released in his prime during the 1960s. He can conjure up a groove out of nothing, making it flow and ebb, while the drummers talk to each other with their instruments. It's not quite all percussion, however, as the one-string ektar fiddle, synth, chants, and even (surprisingly) hammered dulcimer enter the mix. Each of the six tracks gets time to develop, and it's the kind of disc that will have listeners performing workouts on their bodies (keeping up, however, is a different matter). It's readily apparent just how good these guys were during this session, making it sound so easy. Originally recorded in the 1990's but never commercially released, Circle of Drums is a lost treasure - rediscovered and remastered by Chesky Records using special surround sound processing in keeping with their commitment to high-resolution audio. Olatunji might no longer be with us, but on this disc he leaves a strong legacy 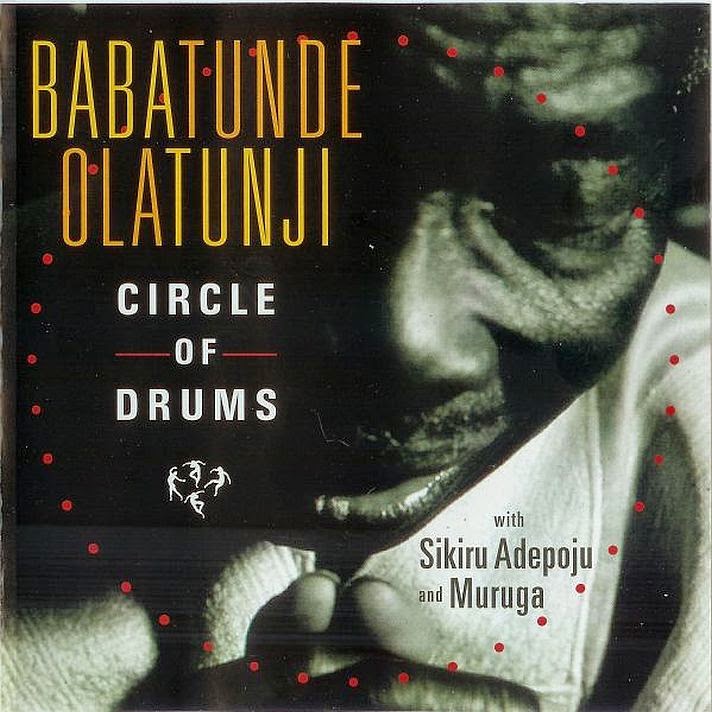 This recording is the tenth in Olatunji's Drums of Passion cycle that explores integral facets of the human experience, from healing to liberty. Now Olatunji turns his attention to life's brightest aspect. "This one is about love," he declares exuberantly. "What is love? I'm trying to give the different meanings that we think about love. Love is a lifetime process. It might take a lifetime for me to know you." He quotes an African saying: "What one desires most in one's heart finds frequent expression in one's words." Olatunji's words are sung in his tribal language, Yoruba, and the drums that surround him - his ashiko, the big, curvaceous mother drum, the smaller, cylindrical djembe, the djun-djun and the talking drum - transmit the message as eloquently as the lyrics.

Each track invokes another face of love and tells stories of Olatunji's own life. On Spell M6nisola, Olatunji sings of his American-born granddaughter going to study at her grandmother's school in Ibadan, Nigeria, as he articulates the young girl's name in drumbeats.

The travails of romantic love are addressed on Sare Tete Wa, yearning as it begs, "Lover, please come running back to me." Fear of commitment permeates Long Distance Lover, and a parallel anguish fuels the doomed passion of Don't Know Why My Love. Upbeat dance floor lust grooves through What's Your Number, Mama?, in which a dancer's devious routine to acquire a love object's phone number vies with his mental calculations of her measurements. A more abstract love, the intimate conspiracy between dancer and drummer, inspires Bebi Alolo and Love Drum Talk. 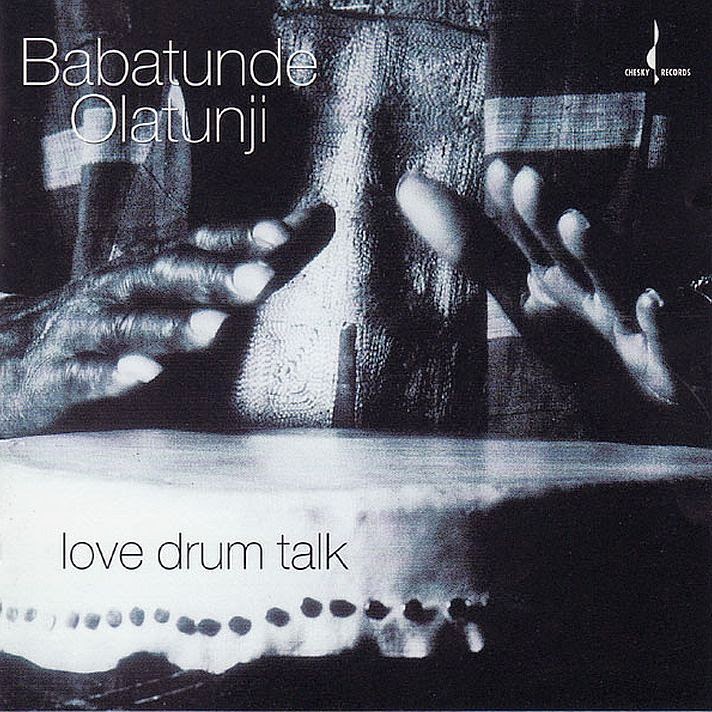 Billed as "traditional African Meditation Music," this provocative mix of tribal wails, chants, and hypnotic percussion patterns is the first posthumous release from a Nigerian master whose impact on Western culture was profound and demands attention. Linked to the African education of Malcolm X, John Coltrane, and inspiring Martin Luther King, Jr., Olatunji (who died in April 2003) later collaborated with the Grateful Dead's Mickey Hart to create the ultimate percussion supergroup, Planet Drum. Healing Session was recorded in 1992 when Olatunji was at the height of his powers, and it features all the key members of his renowned Drums of Passion ensemble. You'll probably just enjoy grooving along to the cool, polyrhythmic thumping sounds; exotic inventions; and impassioned tribal cries, but in actuality he's allowing listeners to experience the heart of his native Yoruban culture, designed for healing and guided meditation. This is one of the most pure examples of Olatunji's cultural vision ever recorded, a small ensemble imparting deeply moody meditational music in a highly pure, traditional mode. For the tens of thousands of Olatunji's former students from over 50 years of his workshops this recording will transport you back to the first time you sat down with the master drummer himself to learn traditional songs he taught using his 'gun-go-do-pa-ta' teaching method.

These honor and invoke the Yoruban gods, the potent backbone of the healing and trance rituals of voodoo, Santeria, and candomble traditions in the New World. It's tribal music at its most pure and raw, designed for hardcore fans of deep Africa but also intriguing for those who simply like a lot of rhythmic variation. 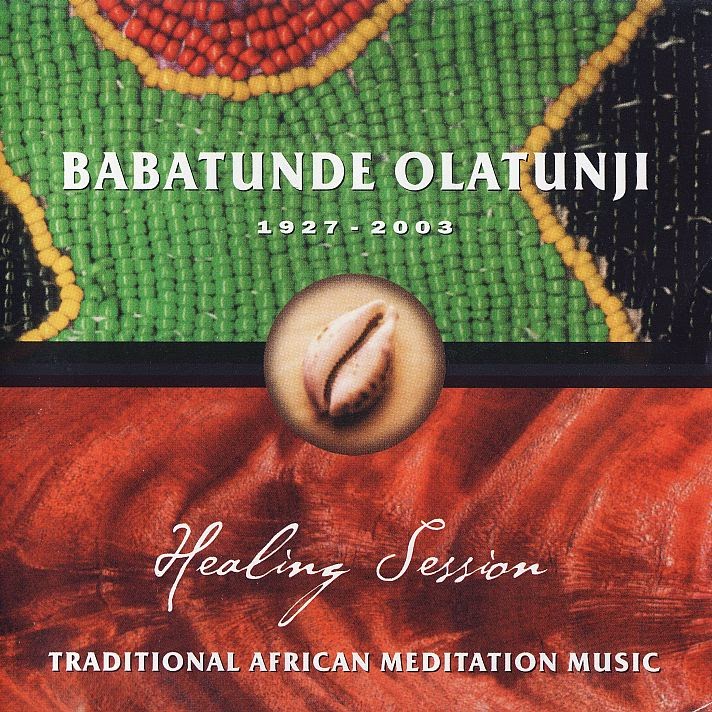 thank you very much

Hey man, can you reupload Babatunde Olatunji - Drums Of Passion 1960 in flac? So want to hear it

Hello Rho!
Your last re-ups were great and full-filled wishes I hadn't asked yet.
However your re-up of Babatunde Olatunji - Healing Session (flac) needs some kind of healing from your end, it's not available for download.

Thanks in advance, best wishes / Thomas

Hello Thomas rarely use mirrorcreator for flac uploads, rightly so it seems as all its re-uploads failed, meanwhile you can geta healingsesion at 1fichier..n'joy

Hello Rho!
I think you used is for 1 more re-up, it worked.
Thank you!

I'd be grateful if you could re-post these Babatunde Olatunji albums, please. However, I am aware that you are swamped with re-up requests at the moment, so whenever you get around to it is fine! Thanks

Thanks for these re-ups, Rho!