Hello, today is not just another day it's 11 all over today, There's 11 players in soccer, fieldhockey and cricket, 11 shots in a salute, the Sun has an 11 year cycle. Numerologists believe that events linked to the time 11:11 appear more often than can be explained by chance or coincidence. This belief is related to the concept of synchronicity. Other authors believe it is an auspicious sign, and others that it signals a spirit presence. The belief that it has mystical powers has been adopted by believers in New Age philosophies. Then there's the eleventh hour concept meaning the last possible moment to take care of something, and often implies a situation of urgent danger or emergence Eurofiles take note ! Ah yes that wondeful number 11 and today we get a triple dose of it. Well as numbers go it's pretty special

Makes sense then to have a double album today, njoy !
xxxxx xxxxx xxxxx

Gilles Peterson'(born 64) attended The John Fisher School, in the mid- and late- 1980s, living among the South London suburban soul scene in the early eighties, Gilles would avidly listen to listening to Level 42, Earth Wind & Fire, Central Line and the heavier, deeper pirate stations such as Radio Invicta. This inspired him to set up his own station - literally an aerial suspended between a tree and a phone box - playing an eclectic mix of jazz, funk, reggae, soul and early electro. By a stroke of luck, Radio Invicta needed a new transmitter, so Gilles swapped his for a regular show on the station.

At the same time, Gilles was a regular shopper at DJ Paul Murphy's Palladin Records. Murphy also DJ'd at Camden's Electric Ballroom, and his knowledge of rare, killer power jazz tunes and rare Afro-Cuban fusion was further inspiration for Gilles, who took over the decks when Paul left. Once ensconced upstairs in the Electric Ballroom, Gilles' understanding and insight into jazz, funk and soul grew exponentially. Gilles soon began to play at Nicky Holloway's Special Branch night at The Royal Oak.

1985 saw Gilles releasing the Jazz Juice (streetsounds) compilation series, collecting together many of the jazz tracks Gilles had been playing over the past few years. EMI Records soon called on Gilles to put together a series of inspired collections showcasing jazz label Blue Note's best artists resulting in 'Blue Bossa Vols. 1 & 2' and 'Baptist Beat' , which became the motivation for the hugely popular 'Blue' series of Jazz compilations.

During this period, Gilles had also been working on new pirate radio projects before 'going legit' with the BBC Radio London which was the first legal station he worked for, hosting a show called 'Mad On Jazz'. After leaving Radio London in 1986, Gilles started his Sunday sessions - 'Talkin' Loud' & 'Saying Something' - at Camden's Dingwalls. Co-hosted by Patrick Forge, these ran for five years. Coinciding with the emerging acid house scene, the sessions became a natural magnet for post clubbing come-down kids.

Shortly afterwards, Gilles started the Acid Jazz label, but after two years he felt the sound, the music and name was becoming a mod thing, a retro thing.' And so the approach from Phonogram was welcome , and he set up a new label Talkin' Loud records in 1989 . Gilles got the chance to echo his own diverse tastes and the label saw releases from the likes of Brand New Heavies, Jamiroquai, the Galliano.

Back on air, Gilles' show on London's Jazz FM was axed in 1990 after he played 'inappropriate' music and made statements supporting peace during the Gulf War. Soon after, he joined the newly-legalized Kiss FM. His Sunday evening WorldWide slot proved one of the most popular on the station and he stayed there for eight years until he joined Radio 1 in 1998. From 1998 to the present, through his BBC show Worldwide, Peterson has continued to stretch the musical boundaries. The show has always highlighted both new, but more importantly for the audience it is supposed to serve, older and often very rare records from the late-1950's to 1980's. In fact every three months or so, Gilles dedicates a whole show to older vinyl releases in a special version of his show he subtitles a Brownswood Basement. In August 2004 the show moved from Wednesday (midnight til 2am) to an earlier Sunday slot (11:00 to 01:00) In September 2006, Peterson's show on Radio 1 was moved from Sunday night to Wednesday night (more precisely the early hours of Thursday morning), 02:00 to 04:00 (GMT) where you can pick him up every week and not to worry.

Widely acclaimed as a musical tastemaker, Gilles spreads his influence on music listeners around the world mostly through the Worldwide radio show on BBC Radio 1 and besides he also does another version of the show which gets syndicated to radio stations all over the world. Parallel to this, his frequent DJing gigs around the world also have cemented a worldwide following. In 2006 Gilles and Freshly Cut, a French event production company from Montpellier, collaborated to create the unique Worldwide Festival. This started out as a small intimate festival during the summertime in the coastal town of Sète in France. Meanwhile it hasbeen expanded to three festivals, in London, Shanghai and Sète in 2007. In 2008 it will have expanded to take place in London, Beijing, Tokyo, Frankfurt, Singapore and Sète. 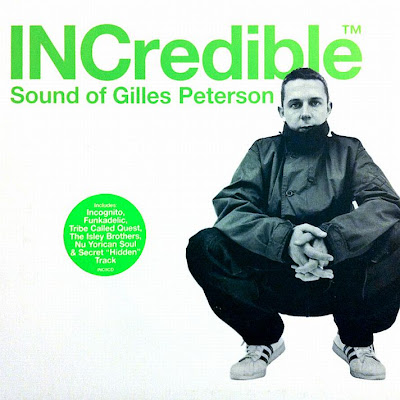 could you possible repost the flac version of this Incredible Sound Of Gilles Peterson please?

Likewise, I'd like to have the FLAC version of INCredible Sound of Gilles Peterson as well. Can you reupload the album? Thanks a bunch! :D

Please repost the flac version of the album. Thanks!

hey Rho
can you reupload please.
thank you so much