Hello, guess i'm good for another bowl of Alphabet Soup. Tripple A Ayers, Kevin's the name, everybody's unemposing darling, relaxt being his middle name Seriously he scored big points in the sixties, early seventies with the Soft Machine and later with his solo albums..ive posted Confessions of Dr Dream 11/11/06. One of my favourite albums of his wasnt even one..formally that is . It's a collection of tracks that didnt fit..too far out or just for the fun of it and some b sides. However, the whole is very entertaining with some hilarious tracks such as Stranger In Blue Suede Shoes and Fake Mexican Tourist Blues, carnaval under a Caribean Moon and a track like Puis Je, which i think is an hommage to Serge Gainsbourg......A Certain Ratio has passed my posts aswell, their first album To Each ..is at wavetrain 777 This one is a greatest hits of sorts, Creation released it when they got hold of their back catalogue and i think the idea of having the tracks remixed is original for a compilation at that time 1994..... Finally, Archive their moody first album didnt get the acclaim/sales it deserved, still they moved on and these days have evolved into a more psychedelic prog band from their dark trip hop beginnings, big in France and Poland and i'm sure they do well in the country inbetween, Germany, aswell...some great tracks here on Londinium which btw is latin for London...

John Peel wrote in his autobiography that "Kevin Ayers' talent is so acute you could perform major eye surgery with it."
Kevin Ayers was a founding member of the pioneering psychedelic band Soft Machine in the late 1960s. After an exhausting and extensive tour of the United States, a weary Ayers retreated to the beaches of Ibiza to recuperate. While there, Ayers went on a songwriting binge that resulted in the songs that would make up his first album, Joy of a Toy. The album was one of the first released on the new Harvest label, along with Pink Floyd's releases. Joy of a Toy established Ayers as a unique talent with music that varied from the circus march of the title cut to the pastoral "Girl on a Swing," and the ominous "Oleh Oleh Bandu Bandong", based on a Malaysian folksong. One interesting product of the sessions was the single, "Religious Experience (Singing a Song in the Morning)", early recordings of which featured Ayers' close friend Syd Barrett on guitar and backing vocals.

A second album, Shooting at the Moon, soon followed. For this, Ayers assembled a band that he called The Whole World, including a young Mike Oldfield on bass and occasionally lead guitar, and avant-garde composer David Bedford on keyboards.
The Whole World was reportedly an erratic band live, and Ayers was not cut out for life on the road touring. The band broke up after a short tour, with no hard feelings, as most of the musicians guested on Ayers' next album, Whatevershebringswesing, featuring the mellifluous eight-minute title track that would became Ayers' signature sound for the '70s. The Confessions of Dr. Dream and Other Stories marked Ayers’ move to the more commercial Island record label and is considered by many to be the most cohesive example of Ayersian philosophy. The production was expensive, with Ayers quoting the recording costs in a 1974 NME interview as exceeding £32,000 (a vast figure at the time). On this LP Mike Oldfield returned to the fold and guitarist Ollie Halsall from progressive rock band Patto began a twenty-year partnership with Ayers.

In 1976 Ayers returned to his original label Harvest and released Yes We Have No Mañanas (So Get Your Mañanas Today). The album was a more commercial affair and secured Ayers a new American contract with ABC Records. The LP featured contributions from B.J. Cole and Zoot Money. That same year Harvest released a collection entitled Odd Ditties, that assembled a colourful and lively group of songs that Ayers had consigned to single B-Sides or left unreleased. it shows his songwriting skills and humor and is a great listening and there's even stuff to dance to. Meanwhile most tracks have found their place as bonusmaterial on the remastered issues of his albums.

The late '70’s and '80’s saw Ayers as a self-imposed exile in warmer climes, a fugitive from changing musical fashions, and a hostage to chemical addictions. The road back was marked with 1988’s prophetically titled Falling Up, that received his first unanimously positive press notices in years. Despite the critical acclaim Falling Up received, Ayers by this point had almost completely withdrawn from any public stage, a state further compounded by the sudden death, by a drugs overdose, of his musical partner Ollie Halsall. An acoustic album Still Life with Guitar recorded with Fairground Attraction surfaced in France on the FNAC label and was subsequently released throughout Europe. In the late '90's, Ayers was living the life of a recluse in the South of France. At a local art gallery he met American artist Tim Shepard who had studio space in the area, and the two became friends. Ayers started to show up with a guitar, and by 2005, passed some new recordings onto Shepard. It brought him back into the middle of his old scene but a new generation of musicians/fans aswell...the endresult The Unfairground was released in September 2007. 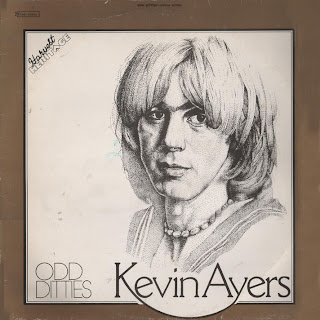 Intense and diverse, and originally drummerless, ACR released their debut single in 1979 - "All Night Party/The Thin Boys" through Factory Records. Donald Johnson joined as drummer after its release, completing the original line up with Simon Topping, Jez Kerr, Pete Terrell and Martin Moscrop. The band returned to the studio and completed a series of gigs around the country with labelmates Joy Division during late '79 and early 1980. Factory released the debut album "The Graveyard and the Ballroom", a limited edition cassette-only release that contained both studio demos and live tracks. In late 1980, the story switches from post-punk Manchester to the hustle-bustle of the Big Apple, New York City. The band checked into EARS studio, New Jersey, with legendary producer Martin Hannett at the controls. The fruits of these sessions formed ACR's debut studio album, "To Each...", an album on which the impact was single-handedly destroyed by "that idiot hippie" - an in-house engineer at the studio who decided to zero all of Hannett's mix settings before he'd had chance to get the album to tape. The album was eventually remixed and released in January 1981, proceeded by the single, Flight.

Immediately after the release of "To Each...", the band headed back into the studio to record its follow-up, "Sextet". This time the choice of studio was less geographically glamorous - Revolution Studios, in Cheadle Hulme. The album was self-produced, and featured vocals from Martha Tilson, as Simon Topping retreated to the background in the band. By the time of its release in January 1982, "Sextet" was receiving ecstatic reviews from the press. ACR's subsequent album release "I'd Like To See You Again" was based upon stripped down funk and influenced by a more electronic brand of dance music. The emerging club influence is apparent throughout the album It got mixed reviews, this adds to the argument that the band often were ahead of themselves - maybe they were just 'too early'. Pete Terrell, apparently disillusioned by the music industry, left shortly after the albums release. A second US tour beckoned during December 1982, and on the band's return they received another bombshell - Simon 'Dream' Topping departed, and this was the beginning a dark period for the band.

June 85 , they set off to tour the States again, with New Order, and the tapes of these gigs provided the mesmerising "ACR Live In America" album . Then ACR disappeared into the studio to record their fourth and final Factory studio LP - "Force". The album was undeniably their finest recording yet, all the elements had combined perfectly - the ferociously funky rhythm section was tighter and bolder than ever, the effected guitars soared ever higher, Tony's sax cut like a knife through butter.

In 1987, the band signed to a major label - A&M Records, and headed into the studio to record , "Good Together", it ended up a bit too polished. In the year that followed ACR built their own studio, The Soundstation, using the money from the advance paid to them by A&M. The single "I Won't Stop Loving You" was given the remix treatment by both Bernard Sumner and Norman Cook, it was played heavily by Radio 1. Unfortunately, it only skimmed the top forty. It was followed by the distinctly un-commercial, but ultimately fantastic, "ACR:MCR" album. The album was mainly instrumental, crossing from electro to dub to latin. Relations with A&M were beginning to wear thin, the label was disappointed with the bands lack of commercial success, and the band were disappointed with the way the label were trying to shape their sound. The band had one last card up their sleeve. They re-recorded their cover of the Banbarras hit, "Shack-Up", and backed it up with a plethora of remixes, again from Norman Cook. The promo of the single was rushed out to radio stations across the country, then - nothing. ACR and A&M were no longer an item.

During 1994, the band signed a deal with Creation Records who subsequently re-issued the entire ACR Factory back catalogue along with a remix album, "Looking For A Certain Ratio". The remix album featured brand new mixes from the likes of SubSub and New Order's Other Two, plus another re-recording of "Shack-Up". 1996 saw the release "Change The Station"
The turning of a new millennium saw a rush of interest in A Certain Ratio - their influence on a plethora of DJs and musicians across the globe found them constantly referenced through the media. As Punk-Funk once again became the sound of the other city that never sleeps. Since 2003, bands such as The Rapture, LCD Soundsystem, Radio 4 have all drawn heavily on the legacy of A Certain Ratio. 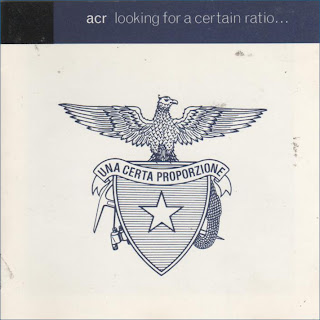 Archive were formed by Darius Keeler and Danny Griffiths in 1994 from the ashes of UK breakbeat act Genaside II. Together with female singer Roya Arab and young rapper Rosko John, the band released their first album "Londinium" on Island Records in 1996, a mix of dark trip-hop, rap and prog rock. The album received critical acclaim, but due to internal dispute the band split up later that year. In 1997 Keeler and Griffiths reformed Archive with another female singer (Suzanne Wooder) and in 1999 released their second album "Take My Head", a mix of pop and symphonic trip-hop far more melodic than its predecessor. Due to some dispute among themselves, the band broke up in 1996.

Between 2002 and 2005 the band released three albums with Craig Walker, formerly of Power of Dreams, as singer, to growing popularity and critical acclaim, including a large following in France and Poland. These albums have seen Archive gradually turn away from their roots and leaning towards more psychedelic and progressive style of bands. They also composed the soundtrack to the French film Michel Vaillant, released in November 2003.

In autumn of 2004, Archive announced that Dave Pen (Birdpen) would be replacing Walker on the Noise tour - due to the continuing personal problems between Walker and the rest of the band. During this same tour, Keeler and Griffiths met the singer Pollard Berrier at one of their shows in Vienna, Austria. The three began writing and rehearsing together.
Finally, in 2006, they release "Lights", their latest disc, including most of the previous line up (with Darius Keeler, Danny Griffiths, Maria Q, Dave Penney, and Pollard Berrier). They have been touring in Europe since 2006, the "Lights" tour response has been excellent, and they recorded a live DVD in Paris in January 2007. 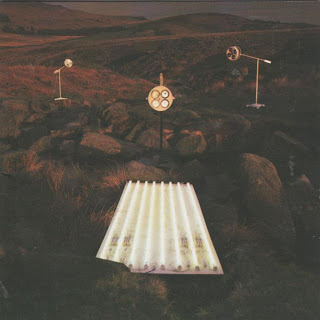 Please could you re-up 'ACR - Looking for a certain ratio'