Hello, Sundazers today i return to Burnt Friedman.   Friedmann was raised in Kassel ( Documenta) where he studied painting, performance and video at the local art college from 1984 to 1990. Before he'd already been recording sounds and self-built instruments.  His free spirited style defies easy categorisation, yet over the years his trademark sound became easily recognizable even in his remix work for other artists.
>
Burnt Friedman has become an unavoidable maverick over the last few years. His many musical incarnations, from his jazz-fuelled collaboration with Atom™ to the electronic perversions of some of his solo projects, rarely help to create a complete portrait of the man. His inspirational creativity had him more or less take charge of David Sylvian's Nine Horses project... Beside his musical activities, the 42 year old German also heads Nonplace Records, has produced numerous records and is ...much more at my nov 06 post , here 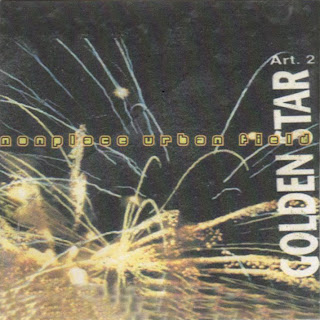 Friedmann's signature commitment to accelerated mutation with respect to convention is clearly nascent in his Drome work, most obviously in his knack for odd combinations. Although Friedmann's releases as Drome have thinned in recent years, the name is widely regarded in association with the development of downtempo breakbeat and trip-hop, with a sample-heavy ambient- and dub-influenced take on hip-hop-styled beats and a clear, atmospheric nod to home listening over the dancefloor. Hello aboriginal Scanners remix does sound 'off' but my copy and rip sound the same, so im not sure what else you mean by defect here.
Please clarify, that said thusfar no other complaints.

"CRC failed in Nonplace Urban Field - Golden Star 2\10 - Unknown Wave Contexts (Scanner Rmx).ogg. The file is corrupt"
I tried rapidshare & zshare it was the same...
Anyway thanks a lot for your great job !!

Hello PJ its odd there have been more unzipping problems lately..looks like i need to defrag, yet i run a check on the zipfile.. nothing. Well ive re uploaded Unknown Wave Contexts, hopefully things go well this time

Been after these since 96. Very thanx. -- Stefan M./Occupied Territories

Hey Rho -- The second Nonplace file is corrupt. It hangs at track 10 (the second in the archive) and doesn't continue. Thanks for posting a new version of track 10, but that doesn't solve how to acquire the rest of the tracks beyond that point. Any chance we could persuade you to rip disc 2 and repost it all again?

Hello Dave, well those undulating waves sure cause trouble..well let me know if this works.

i wonder how you can put up all this "not your music"
for free full download here, is there something i missed on the internetz concerning "artist rights" to their recordings .. ? i'm not personally offended by this, but i recon my good friend burnt would be ..

pls get in touch, i'd like to learn from you about these things ..

Did you by any chance read the comments, someone had been searching for this for 10 years, Burnts nineties music just isn't available not even at Amazon germany let alone A.com.. Myself i havent been able to get my hands on Some More Crime for many years. That said i feel Burnt is an artist that doesnt look back but moves on.

I run this blog with respect towards the artists, at the same time i see the music industry as the big enemy of artists and public. At Rho-Xs, as a rule, i stay clear of any recent releases (younger then 5 years), in fact i think on average what i post is well above 10 years old.

I've posted Friedmans work because he's a cool character, deserving more exposure then he gets in the english language media,-not sure how it is in Germany, im sure he's the man in Koln. The fact that he just recently, with Nine Horses became better known, had nothing to do with it, i've bought his work 10 years ago, maybe you feel that work should be kept away from the public, but to be honest, i find it hard to believe Bernd would prefer to keep that space between the public ears for other music.

Thanks for posting Golden Star. I bought that album in vinyl way back, and sadly didnt keep it in anything close to mint condition. So now I have it in great qualtity on my hdd!

I have been looking for unitone hifi tunes, especially the album "boomshot" - any posts on this? Or more old stuff from the incoming label?

Drome - Dromed is the best of this list and the best song is Gudrun because it's rare and it has some retro sounds, I'd like to get the original album..m10m

Is it possible to repost "Dromed" in FLAC again? Thank You.

hey, any chance to re upload this albums it will be great
thank you Rhoa

I always found his early works (drome especially) superior to the more recent ones.
Thanks for sharing!