“If you want to find
the Secrets of the Universe,
think in terms of
Energy, Frequency and Vibration.”
– Nicola Tesla

Sound healing is the process in which a practitioner uses music — including the emotional, psychological, spiritual, physical, social, mental, and superficial — to improve the health of their patient. It improves many facets of the patient’s life, including emotional and social development, cognitive and motor functioning, and psychological and psychiatric health.

Healing with sound happens in a number of ways. Patients listen or sing along, improvise musical acts, meditate, chant, and play musical instruments. Some practitioners subject the patient to specifically crafted sounds to induce positive brainwaves.Almost everything we experience in the universe is simply our perception of waves. When sound waves reach our ears, they are converted into electrical signals that travel up the auditory nerve into the auditory cortex, the part of the brain that processes sound. Once sound waves reach our brains, they trigger responses in our bodies. This process alters our emotions, releases hormones, and triggers certain impulses. Although research on how music changes our brains is lacking, there is evidence to suggest that musicians have different brains than those who are not musically inclined.

Research has shown that the brains of musicians are more symmetrical. And that the parts of the brain responsible for motor and cognitive functioning, coordination, and reasoning, are significantly larger. And thanks to an enlarged corpus callosum, the two hemispheres of the brain have better communication. In neurological studies, it has been proven that listening to music makes us more productive and creative. It can relieve stress and improves our moods. This is because listening to music floods our brains with dopamine. It also releases oxytocin, a natural painkiller, and hormone that allows us to bond with others. In fact, oxytocin is most commonly found in mothers during labor. Music also helps language development and improves communication. It’s even been shown to increase our IQs, so it’s safe to say that music makes us smarter. It improves our memory too, warding off brain disorders such as Alzheimer’s. Music is powerful. It can change our brains, and so it changes our bodies.

What Are The Benefits Of Sound Healing?  When listening to upbeat or cheery music, or when listening to deep, melancholy songs, our emotions flare and we can better process our feelings. The difference is that we only care to listen to sad songs when we are feeling sad because (and here’s the kicker) we know it makes us feel better. A 2006 study done by the Journal of Advanced Nursing discovered that those who listen to music feel less pain and experiences less anxiety than those who don’t. Since sounds come at different frequencies and we too emit our own waves, healing with sound happens by matching frequencies to those that are conducive to healing and relaxation. A study in the 1970s proposed that when one tone is played to one ear, and a different tone is played to the other, the two hemispheres of the brain connect and create a third (internal) tone called a binaural beat. Binaural beats synchronize the brain, providing clarity, alertness, and greater concentration. It’s solid evidence that our brains and bodies respond to sound in both a cognitive and physical way. There are a number of methods, instruments, and techniques for using sound therapy. But at its foundation is the premise of entrainment, a method of synchronizing our brainwaves by producing a stable, solid frequency that our brains adjust to and then match.

Healing with sound can improve or cure many ailments including:

It can also bring about:

Clarity and balance
Relaxation
Improved memory and concentration
Improved sleep
A stronger immune system
Improved creativity
Heightened awareness, both of the self and the environment 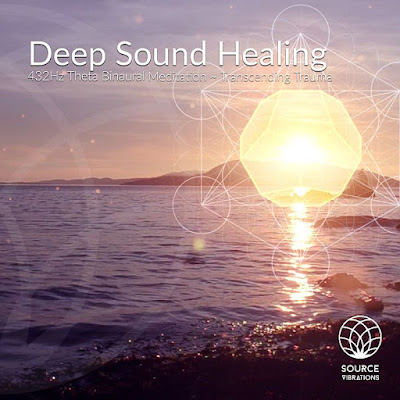 Produced in 1996, Remembering the End of the World was the first documentary covering David Talbott's labors to reconstruct celestial events in ancient times. The Ben Ged Low film traces Talbott's work back to its beginning in the early 70s.
By following an original inspiration in the work of Immanuel Velikovsky, Talbott discovered a massive ancient story focused on the remote planet Saturn, a celestial power remembered as the "primeval sun." This documentary is the first production dealing with the mythic imagery of the "Polar Configuration". In the years that followed, the presentation helped to inspire other dedicated researchers, several of whom are still pursuing the subject today. 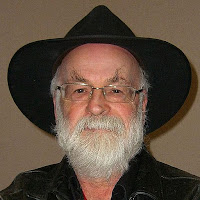 Pratchett, with more than 85 million books sold worldwide in 37 languages, was the UK's best-selling author of the 1990s. He was appointed Officer of the Order of the British Empire (OBE) in 1998 and was knighted for services to literature in the 2009 New Year Honours. In 2001 he won the annual Carnegie Medal for The Amazing Maurice and his Educated Rodents, the first Discworld book marketed for children. He received the World Fantasy Award for Life Achievement in 2010.

Discworld is a comic fantasy book series written by the English author Terry Pratchett, set on the Discworld, a flat planet balanced on the backs of four elephants which in turn stand on the back of a giant turtle. The books frequently parody or take inspiration from J. R. R. Tolkien, Robert E. Howard, H. P. Lovecraft, Charles Dickens and William Shakespeare, as well as mythology, folklore and fairy tales, often using them for satirical parallels with cultural, political and scientific issues.

Forty-one Discworld novels have been published. The original British editions of the first 26 novels, up to Thief of Time (2001), had cover art by Josh Kirby. The American editions, published by Harper Collins, used their own cover art. Since Kirby's death in 2001, the covers have been designed by Paul Kidby. Companion publications include eleven short stories (some only loosely related to the Discworld), four popular science books, and a number of supplementary books and reference guides. The series has been adapted for graphic novels, theatre, computer and board games, and television.

The Light Fantastic is a comic fantasy novel by Terry Pratchett, the second of the Discworld series. It was published on 2 June 1986, the first printing being of 1,034 copies. The title is a quote from a poem by John Milton and in the original context referred to dancing lightly with extravagance. The events of the novel are a direct continuation of those in the preceding book, The Colour of Magic (the only Discworld novel to follow on in this manner). 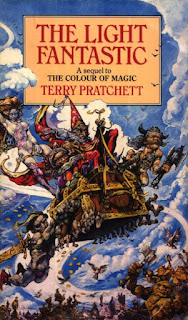 The story takes place on the Discworld, a planet-sized flat disc carried through space on the backs of four gargantuan elephants – Berilia, Tubul, Great T'Phon and Jerakeen – who themselves stand on the shell of Great A'Tuin, a gigantic sea turtle. The surface of the disc contains oceans and continents, and with them, civilizations, cities, forests and mountains.

The Light Fantastic begins shortly after the ending of The Colour of Magic, with wizard Rincewind, Twoflower and the Luggage falling from the Discworld. They are saved when the Octavo, the most powerful book of magic on the Discworld, readjusts reality to prevent the loss of one of its eight spells, which has resided in Rincewind's head since his expulsion from Unseen University: Rincewind, Twoflower and the Luggage end up in the Forest of Skund. Meanwhile, the wizards of Ankh-Morpork use the Rite of Ashk-Ente to summon Death to find an explanation for the Octavo's actions. Death warns them that the Discworld will soon be destroyed by a huge red star unless the eight spells of the Octavo are read.

Several orders of wizards travel to the forest of Skund to try and capture Rincewind, who is currently staying with Twoflower and the Luggage in a gingerbread house in the forest. In the subsequent chaos, Rincewind and Twoflower escape on an old witch's broom, while the Archchancellor of Unseen University is killed when his attempt to obtain the spell accidentally summons the Luggage on top of him, crushing him to death. His apprentice, Ymper Trymon, uses the opportunity to advance his own power, intending to obtain the eight spells for his own good.

Rincewind and Twoflower run into a group of druids who have assembled a "computer" formed from large standing stones, and learn of the approaching red star. As Twoflower attempts to stop the druids from sacrificing a young woman named Bethan, Cohen the Barbarian, an octogenarian parody of Conan, attacks the druids. Twoflower is poisoned in the battle, forcing Rincewind to travel to Death's Domain to rescue him. The pair narrowly avoid being killed by Ysabell, Death's adopted daughter, and as they escape Death's Domain, Rincewind learns from the Octavo itself that it had arranged for its eighth spell to escape into his head, to ensure the spells would not be used before the right time.

Rincewind and Twoflower travel with Cohen and Bethan to a nearby town, where the toothless Cohen leaves to have some dentures made for him, having learned of them from Twoflower. While he is gone, Rincewind, Twoflower and Bethan are attacked by a mob of people who believe the star is coming to destroy the Discworld in response to the presence of magic. The trio escape into one of many shops that sell strange and sinister goods and inexplicably vanish the next time a customer tries to find them. The existence of these shops is explained as being a curse by a sorcerer upon the shopkeeper for not having something in stock. They are able to return to Ankh-Morpork via the shop.

As the star comes nearer and the magic on the Discworld becomes weaker, Trymon tries to put the seven spells still in the Octavo into his mind, in an attempt to save the world and gain ultimate power. However, the spells prove too strong for him and his mind becomes a door into the "Dungeon Dimensions", home to all manner of eldritch creatures. Rincewind and Twoflower manage to kill the now-mutated Trymon, and Rincewind reads all eight of the Octavo's spells aloud. This causes eight moons of the red star to crack open and reveal eight tiny world-turtles that follow their parent A'Tuin on a course away from the star. The Octavo then falls and is eaten by the Luggage.

Twoflower and Rincewind part company as Twoflower decides to return home, leaving the Luggage with Rincewind as a parting gift. Cohen and Bethan also leave to get married. Rincewind decides to re-enroll in the university, believing that with the spell out of his head, he will finally be able to learn magic.

What a pity - I cannot download Deep Sound Healing via any of those hosts :(

Autism is neither an ailment nor, indeed, a disorder - it's simply a different processing system. As far as Autism & sound is concerned, very often those with neurodiverse brains often require and seek silence. Some sounds are able to trigger a meltdown or a complete shutdown. So, whichever way you want to approach this, sound is not always beneficial to the Autistic soul nor is Autism in itself an ailment... (!)

I would respectfully request that you remove Autism from your list of ailments, please. It really does not help this growing and evolving community to be stereotyped in such a way.

The Terry Pratchett Light Fantastic parts 3,4 are the same files (Light Fantastic 01-02) as previously shared. If you able to remedy this it would be appreciated. Thankyou

Hello, a strange mess, first i somehow switched the links for the new episodes of Light Fantastic, no idea how that happened, it's been corrected. Second not sure why the Deep Sounds links wouldn't work at Multi up, but as i am a good guy i've added a direct link at 1Fichier. Third, Autism clearly those inclined are more than a little touchy of having it described an ailment, well i'm no med but i agree rewiring people is not a claim that should be made so i've removed it.

I know from experience that you're a 'good guy' Rho. Thank you for the link and for the removal of Autism from the list of ailments.