Hello, were back to the seventies that laid the basis for the creative explosion of the eighties, there were many acts that got their limelight taken by the Sex Pistols, interestingly today's guys soldier on to this day...Oi !

While most of the early British punk bands spoke of working-class concerns -- primarily unemployment and the shrinking U.K. economy, which was leaving a generation with nothing to do and nowhere to go -- many of the pioneering groups had working-class credentials that were suspect at best; the Sex Pistols' career was being molded by a haberdasher and would-be artist, while the Clash were led by the son of a diplomat. Today's artists, however, were different; proletarian and proud of it, they were the voice of the people in the first wave of British punk, and if they were never as fashionable as such contemporaries as the Sex Pistols, the Clash, Wire, or the Jam (who, in their early days, shared Sham's provincial outlook and "we're with the kids" fan solidarity), they enjoyed a long run of chart successes and were a major influence on the street punk and Oi! movements which followed.......N'Joy

Sham 69 was formed in the working-class community of Hersham (in Surrey) in 1975 by singer and lyricist Jimmy Pursey; the name came from an ancient bit of graffiti celebrating a local football team's winning season in 1969. From the start, Sham 69's politics were populist, and their sound accessible; straight-ahead four-square punk with a hard rock influence and lyrics that often used sing-along slogans in their choruses, such as "If the Kids Are United" and "(Gonna Be A) Borstal Breakout." The band went through a revolving cast of musicians early on before settling on the lineup of Pursey, Dave Parsons on guitar, Albie Slider on bass, and Mark Cain behind the drums. They began scaring up gigs where they could, and began playing the notorious London punk venue the Roxy on a regular basis, where they built up a loyal following.

Step Forward, a small independent label, released the band's first single, "I Don't Wanna," in September 1977. The success of the single and the band's growing fan base prompted Polydor to sign the band in the U.K., and their first album, Tell Us the Truth -- one side recorded live, the other in the studio -- was released in early 1978. (Sire released the album in the United States, and it would prove to be the only Sham 69 album released in America until the late '80s.) By the time the album came out, Albie Slider had left the band and Dave "Kermit" Tregenna took over on bass. Sham's second album, That's Life, was released in the fall of 1978, and featured two major hit singles, "Hurry Up Harry" and "Angels With Dirty Faces"; and as many of the first wave of U.K. punk bands were beginning to peter out, Sham 69's popularity continued to grow.

However, there was a fly in the ointment for Sham 69; the band's rowdy, sing-along attitude began attracting a violent and undiscriminating audience, and fighting became increasing common at the band's live shows. The group also found their gigs were becoming recruiting grounds for Britain 's extreme right-wing (and racist) political party, the National Front; while Pursey often spoke out against the NF, for some reason it was an association that wouldn't go away. While the group's third album, The Adventures of the Hersham Boys, was a commercial success (as were the singles "If The Kids Are United" and "You're A Better Man Than I"), the increasing violence at concerts made it harder to tour, and Pursey began producing other bands and investigating new musical directions.

(Drummer Mark Cain also quit the band, with Ricky Goldstein taking over on percussion.) After the group's fourth album, The Game, received a lukewarm reception from both reviewers and fans, Pursey opted to split up Sham 69 in mid-1980. Pursey went on to a solo career, briefly working with former Sex Pistols Steve Jones and Paul Cook, while Dave Parsons and Dave Tregenna formed a short-lived band called the Wanderers with former Dead Boys vocalist Stiv Bators. After "the Sham Pistols" failed to work out, Pursey recorded a series of ambitious but commercially unsuccessful solo albums, and Tregenna joined the Lords of the New Church. In 1987, Pursey and Parsons assembled a new edition of Sham 69;

In 2005, the band gained media attention when the band's anthemic tune "If the Kids Are United" was played during UK Prime Minister Tony Blair's entrance at the Labour Party Conference. As a result of this, the band was invited on BBC TV's current affairs programme Newsnight to sing a version of the song. Pursey sang altered lyrics, including "Mr. Blair/We know you care/So bring them home/Don't leave them there", referring to the troops remaining in Iraq after the 2003 invasion. In 2006, listeners to Christian O'Connell's Breakfast Show on Virgin Radio voted overwhelmingly for the band to record a song to support the England national football team in the 2006 FIFA World Cup.[6] Released under "Sham 69 and The Special Assembly" (O'Connell and Blur guitarist Graham Coxon were also involved), the song was based on the Sham 69 hit "Hurry Up Harry", with the lyrics "We're going down the pub", changed to "We're going to win the cup!" The resulting single, "Hurry Up England" reached number 10 in the UK Singles Chart, becoming the band's first such hit in 26 years.

In late 2006, Sham 69 broke up, and Dave Parsons stated his wish to independently continue as 'Sham 69'. On 26 January 2007, BBC News announced that Sham 69 had split because of a bitter fallout between Pursey and Parsons. NME reported that a statement released by Parsons included the message: "Sham 69 have left Jimmy Pursey on the eve of their 30th anniversary. The band had become increasingly fed up with Jimmy's lack of interest in playing live and continually letting down both promoters and fans by pulling out of gigs at the last moment". Parsons and Whitewood continued as Sham 69 with Tim V on vocals and Rob Jefferson on bass. This line-up performed tours of the United States, played at many punk festivals across Europe, and released the album, Hollywood Hero, in August 2007.

In May 2011, Parsons stated on his website that he had disbanded Sham 69, although this was disputed by the other members. In July 2011, Pursey announced on Twitter the re-formation of most of the 1977 line-up, comprising Pursey, Parsons and Tregunna. This meant that there were two active bands using the same name, with three of the original line-up (Pursey, Parsons and Tregunna) in one band, and Harris in the other. In June 2012, Pursey registered the name as a trademark. As of 2016, both bands are still touring using the name, with the Pursey version often using the "Original 1977 line-up" tagline, and the other using the "Tim V" name.

The first wave of British punk was overrun with smart kids from upper-class backgrounds playacting at being working-class yobs. (The Clash did this first, and did it better than practically anyone.) But Sham 69 was different; every bit as thick-headed and provincial as the band sounded, Sham 69 took a perversely populist pride in its lack of musical or intellectual sophistication. If there's a point where British punk began to evolve from smart, edgy bands like the Sex Pistols and the Adverts into beer-soaked Neanderthals such as the Exploited and the Anti-Nowhere League, Sham 69 marks the spot, and while its first album, Tell Us the Truth, is the band's strongest work, the album also shows that most of Sham 69's flaws were in plain sight from the start.
Side one of Tell Us the Truth was recorded live, and it's inarguably fascinating as an anthropological document, capturing the Cockney yob in his native environment, complete with football chants and a spontaneous chorus of "Knees Up, Mother Brown." Jimmy Pursey's communication with his audience is inarguably impressive, and some of the songs have a good head of straight-ahead energy (especially "Borstal Breakout"), but the sound is thin and the band seems to have a hard time getting into fifth gear. The studio side actually sounds more impressive; the performances are tighter, Dave Parsons' guitar benefits from a bit of double-tracking, and Pursey sings more than he hectors. But Pursey was already starting to sound a bit pompous, and time has not been the least bit kind to songs like "I'm a Man I'm a Boy" and "Hey Little Rich Boy," which for all their sincerity don't say anything dozens of other bands haven't said better. Tell Us the Truth sounds passionate, belligerent, and kinda dumb, but that's an improvement over Sham 69's later work, where the band sounds overblown, strident, and really, really dumb. 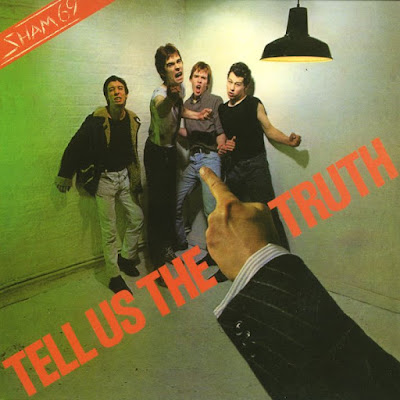 Probably the first (or only) concept punk rock record. The first wave of punk was all about singles and there are two fine ones here: Hurry Up Harry and Angels With Dirty Faces. Jimmy Pursey's everyman vocals are best taken in smaller doses so the reality bits between songs actually help set the songs up. Anyone who can suffer through an episode of East Enders should be able to follow the "day in the life" narrative. The biggest problem is the best music is all on side two which I realize is almost meaningless in the digital world. Anyway a pretty great record that is anchored up by two great singles and a novel concept for an LP. On their first album, Sham 69 sounded like a gang of energetic punk rock simpletons, well-meaning and enthusiastic if not especially gifted, but things had taken a decided turn for the worst by the time they'd cut The Adventures of Hersham Boys in 1979. Where their early recordings took a lean, stripped-down approach, like a Cockney version of the Ramones, this album is dominated by sludgy tempos, pompous "anthemic" melodies, absurd neo-Rick Wakeman keyboard lines, and shouted mass choruses that suggest anyone willing to drink a free beer was allowed to bellow into the mike. And while Jimmy Pursey's lead vocals are a bit more expert this time out, his attempts towards a more musical sound simply betray the fact that he doesn't have much of a vocal range, which hardly helps on songs like "Fly Dark Angel", "Joey's on the Street," and "Lost on Highway 46," which combine the worst aspects of Meat Loaf and Bruce Springsteen with British punk at its most intellectually challenged. The Adventures of Hersham Boys was one of Sham 69's most successful albums and launched two major chart singles, "Hersham Boys" and "Questions and Answers," proving there's a British corollary to H.L. Menken's statement that no one will ever go broke underestimating the taste of the American public. 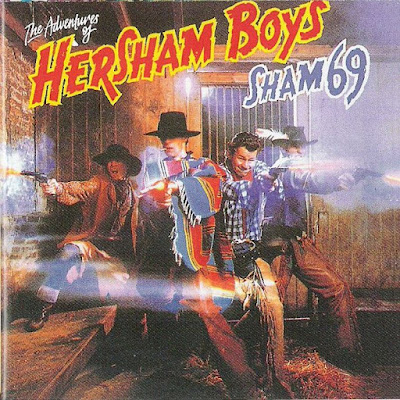 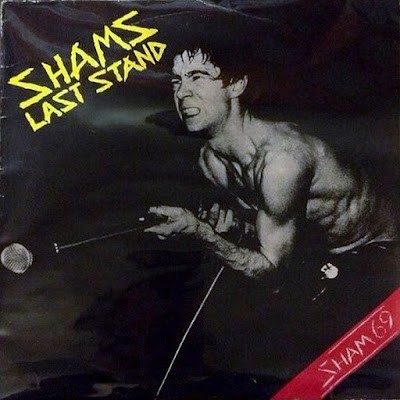 do you have the lords of the new church??? thank you

ho Rho, please a re-up of the Sham...please?
jm from st emilion