Hello, the Euro's saw a dominant but toothless England loose against Iceland that played with courage, skill and togetherness, meanwhile England's top players Kane and Rooney looked third rate, bizarre. Britain brexit and England exit ! The mean culprit of England's demise is their FA, they hired an incompetent coach, Hodgson who clearly wasn't up to the job. They seem to have a hard time finding someone despite having a 4 million pound pay package available. The Belgians most have relaxed somewhat after they saw the Italians do to the reigning champions Spain what they did to them. 2-0  They certainly are a surprise package deemed to old, cunningly they showed their resolve and totally deregulated the tikki-takka Spaniards. Next up the Germans who probably consider them the most dangerous opponent left. The remaining 6 teams in the quarter finals ( Poland-Portugal, Wales-Belgium, France-Iceland) are simply not that impressive.


Today, an awarded singer with an extensive solo discography and international experience. A fundamental presence in the Tropicalia movement, she has been in Brazil's leading team of singers for decades.....N'Joy

Gal Costa was born on September 26, 1945, in the city of Salvador, the state capital of the state of Bahia, Brazil. Her mother, Mariah Costa Penna (deceased 1993) spent hours listening to classical music during her pregnancy in hopes that Gal would be interested in music. Gal's father, Arnaldo Burgos (deceased 1960), died when Gal was 15 years old and the two would never meet.

At the age of 10, Gal befriended sisters, Sandra and Andréia Gadelha, the future spouses of singer-songwriters Gilberto Gil and Caetano Veloso, respectively. Since very young, she has been involved with music as a singer and violão player; when her mother's business broke she became a record shop attendant, where he spent long hours listening to music, especially João Gilberto. She became acquainted with Caetano Veloso in 1963, and friendly disputed him as boyfriend with her girlfriend Dedé, who would later be Caetano's wife. At 18, she was introduced to Caetano Veloso by Andréa Gadelha, engaging with him in a deep friendship that still lasts.

In 1964, Caetano was invited to organize a Brazilian popular music show at the opening of Salvador's Teatro Vila Velha. The show, called Nós, por Exemplo, brought Caetano, his sister Maria Bethânia, Gilberto Gil, and Costa (still under her name Maria da Graça). The show was a success and was re-enacted two weeks later, with the addition of Tom Zé (still presented as Antônio José). The success was even bigger, and the group (without Tom) soon presented another show, Nova Bossa Velha, Velha Bossa Nova.

Domingo In September 26, 1965, the group opened the show Arena Canta Bahia, at São Paulo's Teatro de Arena. At the end of that year, she was taken to the presence of her idol João Gilberto, who asked her to sing while he accompanied; after listening to her on several songs, he declared, "Girl, you sing beautifully. Someday I will return to record an album only with you." Also in that year, she appeared on Bethânia's first album, singing "Sol Negro" (Caetano Veloso). In 1966, she recorded a single for RCA (completely unperceived by the general audiences) and interpreted "Minha Senhora" (Gilberto Gil/Torquato Neto) at TV Rio's I FIC; she also took the name Gal Costa by suggestion of impresario Guilherme Araújo. In 1967, Costa recorded her first LP, together with Caetano (also his first LP), on Domingo. In 1968, she recorded two tracks on the LP manifesto Tropicália: Ou Panis Et Circensis that became her first hits, "Mamãe Coragem" and "Baby." Also in 1968, she achieved great popularity at TV Record's IV FMPB (São Paulo) when she won first place for "Divino Maravilhoso" (Gilberto Gil/Caetano Veloso).

In the next year, she recorded her first individual LP for Philips, Gal Costa. She then began a busy schedule of performances throughout Brazil and that same year recorded another self-titled for Philips. In 1970, she performed in England and, returning next year to Brazil, she recorded the LP Legal.

In 1968, Costa became a part of the Tropicalismo movement. She recorded four songs on Tropicália: ou Panis et Circenses. They were "Mamãe coragem", written by Veloso and Torquato Neto, "Parque industrial", by Tom Zé, "Enquanto seu lobo não vem", by Veloso, and "Baby", also by Veloso. The latter became Costa's first nationwide solo hit, becoming a classic of Brazilian popular music. On the same year, she participated in the 3rd International Music Festival, performing "Gabriela Mais Bela", written by Roberto and Erasmo Carlos. In November, she participated on Rede Record's 4th Music Festival, performing the song "Divino Maravilhoso", by Gil and Veloso. The song also became a nationwide hit and a classic song of popular music.

In 1971, she got success in the show Deixa Sangrar, presented in several capitals, and joined João Gilberto and Caetano in a live TV Tupi performance. In 1972, her show A Todo Vapor was recorded live on a double album, and she performed with Gil and Caetano at several venues. In 1973, she performed at the MIDEM in Cannes, France, and recorded the LP Índia, after the show by the same name. In 1976, she recorded the album Os Doces Bárbaros with Caetano, Gil, and Bethânia, also performing a series of shows with them under the same name, and recorded the solo album Gal Canta Caymmi. She recorded four more albums in the '70s. In the '80s, she gained international exposure, touring through Japan, France, Israel, Argentina, the U.S., Portugal, Italy, and others. In 1984, she performed in the show O Sorriso do Gato de Alice (her 20th album), which was awarded by APCA and received the Shell Prize. In 1997, she commemorated 30 years of her career with the CD and video Acústico MTV (BMG), with many important special guests. In 1998, Polygram released 30 Anos de Barato, a three-CD box set. The double-disc Canta Tom Jobim: Ao Vivo appeared in 1999.

Costa continued to be a viable and active artist in the 21st century, issuing new recorded material even as repackaging of her previous work hit the market. Gal Boss Tropical was released in 2002 by Abril, followed by Hoje: 2005 from Trama Records three years later. 2006 saw the appearance of Gal Costa Live at the Blue Note from DRG.

Recorded at the height of the MPB movement in 1980, AQUARELA DO BRASIL is the singer Gal Costa's tribute to the famed Brazilian songwriter Ary Barroso, the author of the celebrated title track as well as many others not as well known outside his native land. While the album bears slight traces of the neo-disco production that would soon come to plague Brazilian pop music in the '80s, it is mostly a wholly successful showcase for Gal Costa's extraordinary voice and interpretive abilities. About this time, the singer was reaching her full stature as Brazil's premier pop singer, her only serious rival being Elis Regina, who had recorded her own very different, celebrated version of "Aquarela Do Brasil." Many of these compositions were actually written in the '40s and '50s, but in Gal's capable hands, songs like "Tu" and "Inquietacao" sound like fully contemporary pop of the '80s and beyond. Longtime collaborator and peer Caetaeno Veloso joins in a duet on the samba-inflected "No Tabuleiro da Baiana," also known as "Bahia." 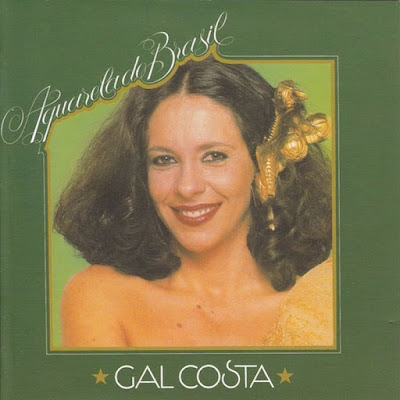 Gal Costa had success with this album, with songs like Caetano Veloso's rock "Vaca Profana," along with "Atrás da Luminosidade," "Onde Está o Dinheiro" and a medley with three Northeastern composers, including the song "Cabeça Feita," from the great Jackson Do Pandeiro, with special guest Luiz Gonzaga (all these songs are in up-tempo, hot regional grooves which had already given her one of the biggest successes of her career, "Festa do Interior," from Fantasia, 1981), and also "Ave Nossa" and "Chuva de Prata" (a very kitsch tune). The album shows Costa with her splendid vocal qualities and the usual competent instrumental backing in a happy, danceable setting, but doesn't represent an especial mark in her career. 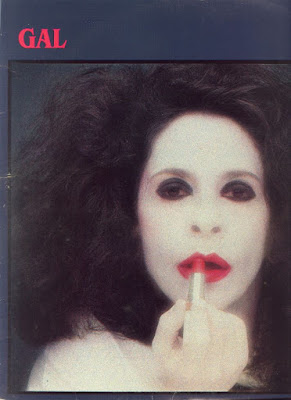 Bem Bom was tropicalista Costa's bid for superstardom in the mid-'80s, with the involvement of everybody who is anybody (well, almost). The jazz and R&B touches are more mainstream than before -- but the Brazilian pop avant-garde has long drawn heavily on U.S. sources, besides being more sympathetic to lushness than its U.S. counterparts. In vinyl, this album is now a rarity. 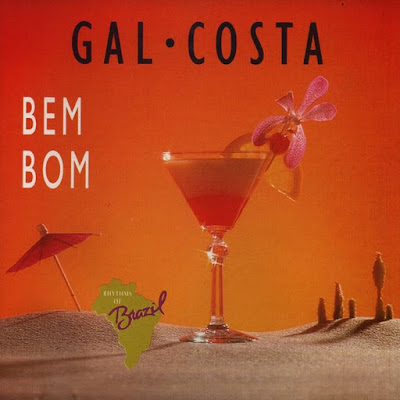 This album by Gal Costa is the first to have new material in five years. In spite of her promise of recording the composers of the "new" generation (Lenine, Chico César, her protégé Zeca Baleiro), she ended up interpreting Adriana Calcanhotto (her hit "Esquadros," in a more rhythmic/Bahian rendition); Herbert Vianna ("Quase Um Segundo," also previously released, in a beautiful piano/string section ballad rendition); Moreno Veloso, son of Caetano ("Sertão," written with Caetano); Carlinhos Brown ("Aguar-te Agora"); and -- surprise! -- José Miguel Wisnik ("Assum Branco"), not a "new" artist, in any aspect, but a creative composer of the Vanguarda Paulista who hadn't got the deserved exposure. Costa recorded on this album for the first time in Spanish (the new Argentinean composer Pedro Aznar, "Amor de Juventud"). "Imunização Racional (Que beleza)" is an obscure song by the late Tim Maia from the ignored phase when he was involved with the religious sect Universo em Desencanto (between 1974 and 1976, later dismissed). The better song on the album is "Qui Nem Jiló," an old hit by the northeastern Luiz Gonzaga, enriched by the gafieira-like brass/flute arrangements and executions by Carlos Malta. The album also has bossa nova ("Aquele Frevo Axé"), funk ("Habib," Jorge Ben Jor), and funk ballad ("Você," an old Tim Maia hit from his second album in 1971). The sonority is divided between contemporary pop with drum machines and fashionable electronics (which are devoted to the impression of modernity) and acoustic arrangements with string and brass sections that try to convey the idea of sophistication. 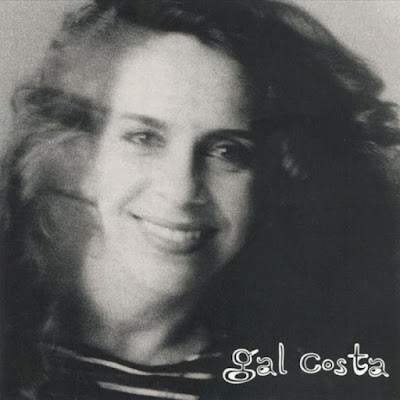 Many thanks, I no have varius albums