Today an artist who fused samba, salsa, and bossa nova with rock and folk music, he's recognized today as one of the pioneers in world music. A multi-instrumentalist and singer/songwriter, Gil joined his first group, the Desafinados, in the mid-'50s and by the beginning of the 1960s was earning a living as a jingle composer. Although known mostly as a guitarist, he also holds his own with drums, trumpet, and accordion.. .....N'Joy

When he went back to Bahia in 1972, Gil focused on his musical career and environmental advocacy work.[18] He released Expresso 2222 the same year, from which two popular singles were released. Gil toured the United States and recorded an English-language album as well, continuing to release a steady stream of albums throughout the 1970s, including Realce and Refazenda. In the early 1970s Gil participated in a resurgence of the Afro-Brazilian afoxé tradition in Carnaval, joining the Filhos de Gandhi (Sons of Gandhi) performance group which only allowed black Brazilians to join. Gil also recorded a song titled "Patuscada de Gandhi" written about the Filhos de Gandhi that appeared on his 1977 album Refavela. Greater attention was paid to afoxé groups in Carnaval because of the publicity that Gil had provided to them through his involvement; the groups increased in size as well. In the late 1970s he left Brazil for Africa and visited Senegal, Ivory Coast, and Nigeria. He also worked with Jimmy Cliff and released a cover of "No Woman, No Cry" with him in 1980, a number one hit that introduced reggae to Brazil.

In 1996, Gil contributed "Refazenda" to the AIDS-Benefit Album Red Hot + Rio produced by the Red Hot Organization. In 1998 the live version of his album Quanta won Gil the Grammy Award for Best World Music Album. In 2005 he won the Grammy Award for Best Contemporary World Music Album for Eletracústico. In May 2005 he was awarded the Polar Music Prize by Carl XVI Gustaf of Sweden in Stockholm, the prize's first Latin American recipient. On October 16 of the same year he received the Légion d'honneur from the French government, coinciding with the Année du Brésil en France (Brazil's Year in France).

In 2010 he released the album Fé Na Festa, a record devoted to forró, a style of music from Brazil's northeast. His tour to promote this album received some negative feedback from fans who were expecting to hear a set featuring his hits. In 2013, Gilberto Gil plays his own role as a singer and promoter of cultural diversity in a long feature documentary shot around the southern hemisphere by Swiss filmmaker Pierre-Yves Borgeaud, Viramundo: a musical journey with Gilberto Gil, distributed worldwide. The film also inaugurates the T.I.D.E. experiment for pan-European and multi-support releases. 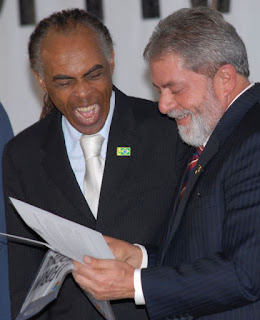 Gil describes his attitude towards politics thus: "I'd rather see my position in the government as that of an administrator or manager. But politics is a necessary ingredient." His political career began in 1987, when he was elected to a local post in Bahia and became the Salvador secretary of culture. In 1988, he was elected to the city council and subsequently became city commissioner for environmental protection. However, he left the office after one term and declined to run for the National Congress of Brazil. In 1990, Gil left the Brazilian Democratic Movement Party and joined the Green Party. During this period, Gil founded the environmental protection organization Onda Azul (Blue Wave), which worked to protect Brazilian waters. He maintained a full-time musical career at the same time, and withdrew temporarily from politics in 1992, following the release Parabolicamará, considered to be one of his most successful efforts. On October 16, 2001 Gil accepted his nomination to be a Goodwill Ambassador for the Food and Agriculture Organization (FAO) of the United Nations, having promoted the organization before his appointment.

When President Luiz Inácio Lula da Silva took office in January 2003, he chose Gil as Brazil's new Minister of Culture, only the second black person to serve in the country's cabinet. The appointment was controversial among political and artistic figures and the Brazilian press; a remark Gil made about difficulties with his salary received particular criticism. Gil is not a member of Lula's Workers' Party and did not participate in creating its cultural program. Shortly after becoming Minister, Gil began a partnership between Brazil and Creative Commons. As Minister, he has sponsored a program called Culture Points, which gives grants to provide music technology and education to people living in poor areas of the country's cities. Gil has since asserted that "You've now got young people who are becoming designers, who are making it into media and being used more and more by television and samba schools and revitalizing degraded neighborhoods. It's a different vision of the role of government, a new role." Gil has also expressed interest in a program that will establish an Internet repository of freely downloadable Brazilian music. Since Gil's appointment, the department's expenditures have increased by over 50 percent. In November 2007 Gil announced his intention to resign from his post due to a vocal cord polyp. Lula rejected Gil's first two attempts to resign, but accepted another request in July 2008. Lula said on this occasion that Gil was "going back to being a great artist, going back to giving priority to what is most important" to him.

Gil has been married four times. His fourth wife is Flora Nair Giordano Gil Moreira. The couple has five children, four of whom are still living. The fifth child – Pedro Gil, Egotrip's drummer – died in a car accident in 1990. Preta Gil, an actress and singer, is his daughter. Gil's religious beliefs have changed significantly over his lifetime. Originally, he was a Christian, but was later influenced by Eastern philosophy and religion, and, later still, explored African spirituality. He is now an agnostic. He practices yoga and is a vegetarian. Gil has been open about the fact that he has smoked marijuana for much of his life. He has said he believes "that drugs should be treated like pharmaceuticals, legalized, although under the same regulations and monitoring as medicines"

As on Caetano Veloso's album from the same year, Gilberto Gil does not sound happy away from his homeland. Recorded in London, the eight songs on his final self-titled album are mostly blues and introspective, downbeat pop songs. Steve Winwood's "Can't Find My Way Home" is an inspired choice, delivered with a crushing sentimentality rarely found in other versions. Gil also reprises "Volks, Volkswagen Blues" from his 1969 LP. The effect isn't quite as doom-laden as Veloso's work, but Gil is definitely homesick, as the touching "Nêga (Photograph Blues)" shows. Most reisssues included three bonus tracks: a live version of "Can't Find My Way Home" along with "Up from the Skies" and "Sgt. Pepper's Lonely Hearts Club Band." 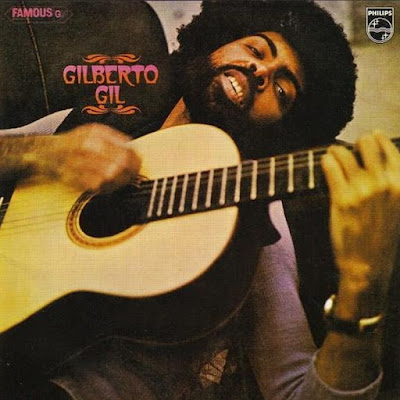 Expresso 2222, Gilberto Gil's first album back in Brazil after spending two years in exile, is a spirited return to form, filled with driving, funky bass, hammering piano, and percussive guitar work. Gil's compositions are on par with the best of his 1968 and 1969 self-titled albums, but is a more even overall affair forsaking the outright diversity Gil showed on those previous albums for a more cohesive set of songs, and while the performances aren't as outrageously groundbreaking, with Expresso 2222 Gil had already proved how far he was capable of pushing the envelope, and so the insane arrangements were no longer necessary. This makes Expresso 2222 one of Gil's most immediately palatable releases of his entire career, and compared to the standards of global rock & roll it is of the most compelling and complex yet accessible albums released in the 20th century. Gil's compositions are melodic and beautiful, and his arrangements are imaginative as always; from using a chorus of backing vocals to great effect on "O Canto de Ema" and "Sai do Sereno" to the rhythmic interplay between Gil's guitar, vocals, and layered percussion on the title track, Gil is in top form throughout the album. 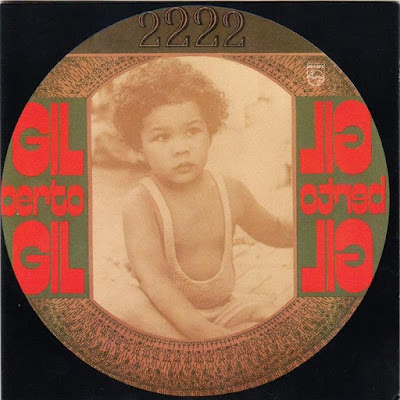 This album captures Gilberto Gil during a show in São Paulo in October 1974, performing very fine but rather rare songs such as the groovy "João Sabino," the acoustic "Cibernética," and the lovely "Menina Goiaba." "Lugar Comum" was written by Gil together with the talented pianist and composer João Donato. This CD shows Gil at the most vibrant, creative, and inspired point of his carreer, effortlessly mixing rock, baião, maracatu, xote, bossa nova, and samba to create his own unique and now world famous brand of Brazilizan pop. Apart from his own compositions, Gil also interprets "Sim Foi Você" by Caetano Veloso and "Herói das Estrelas" by Jorge Mautner. This is one of the least known but at the same time one of the best and most consistent albums by Gil, unlikely to leave any fan disappointed. 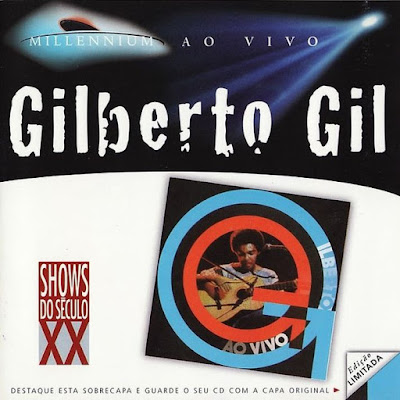 The end of the military dictatorship in Brazil left the country lost in its references and opened way for a period of wild hedonism. Realce, one of Gilberto Gil's most disco-influenced albums, is a document of that period. Released in LP format in 1979, it had the disco ideology expressed in several songs like "Realce" (which became slang for a dangerous drug frequently consumed in those places), "Sarará Miolo" (also a danceable tune, finds room for social criticism through black pride, where Gil reproaches the use of straightening and discoloring of hair by his brothers and sisters), "Marina" (featuring Dorival Caymmi), and "Toda Menina Baiana" (a hybrid of disco and Bahian samba). But there are other songs more faithful to Gil's style. "Superhomem - A Canção" is a sensitive ballad about the bisexual composition of human psyche, and the importance of the feminine in society. "Tradição" is a beautiful samba, richly harmonized, and the lyrics talk about Gil's fascination with a guy of the streets. "Rebento," another juicy samba with intelligent lyrics, was re-recorded by Elis Regina. And "Não Chore Mais," which was another big hit of the album, is a version of B. Vincent's "No Woman, No Cry" made famous by Bob Marley. 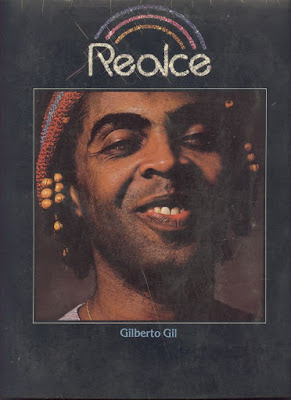 Thank you very much for the amazing Gilberto Gil posts!