Today's artist is a New York student of electronic music influenced by experimentalists John Cage and Terry Riley, Kim Cascone later moved to San Francisco and founded the Silent label. The label was best known for recordings by Cascone projects PGR, Heavenly Music Corporation, Thessalonians and Spice Barons as well as a 1992 tribute to acid named Fifty Years of Sunshine (featuring Nurse with Wound, Psychic TV, Hawkwind, Timothy Leary). After his frenetic release schedule of the early '90s, Cascone took time out to work as a sound engineer for Thomas Dolby's Headspace studios. He returned to active recording with 1999's Blue Cube, his first album as Kim Cascone. Cathode Flower followed later that same year and was followed in 2001 by Residualism on Ritonell through Mille Plateaux.

American composer and sound designer Kim Cascone may be more recognizable in his former role as head of Silent Records, the label he founded in the mid-'80s, but his recordings as Spice Barons, Thessalonians, PGR, and, most often, Heavenly Music Corporation or his own name, have been equally as visible. A soundtrack composer throughout the early '80s before striking out on his own, Cascone formally studied electronic music arrangement and composition at the Berklee College of Music in the early '70s before studying in with Dana McCurdy at Manhattan's New School in 1976. Subsequently working as assistant musical supervisor under director David Lynch on both Twin Peaks and Wild at Heart.

Cascone left Hollywood for San Francisco in the mid-'80s to pursue solo composition, forming Silent Records in 1986 after self-releasing his first PGR album, Silence. Though far more abrasive and conflicted than much of his later work, PGR's use of texture and compositional chance is a constant throughout the whole of Cascone's oeuvre. A number of PGR titles followed -- both on Silent and the RRRecords, Noctovision, and Permis de Construire labels -- and Cascone has since gone on to record primarily as Heavenly Music Corporation, releasing the bulk of his work through Silent. Deriving the name from the seminal recording by Brian Eno and Robert Fripp on their 1973 collaboration No Pussyfooting, HMC's focus, with some exceptions, has been on beatless ambient, beginning in 1993 with In a Garden of Eden (composed just prior to the birth of Cascone's son, Cage), and working through a series of releases in the mid-'90s. Working toward increasingly abstract aural sculptures, HMC's dabbling with the club culture most new ambient composers look to for inspiration has stretched no further than the sparse rhythms that pervade Consciousness III and some of Lunar Phase, with the lion's share of his material drawing from early electronic and musique concrète composers such as Morton Subotnick, John Cage, and Luciano Berio.

In 1996 Cascone sold Silent Records and Pulsoniq Distribution to work as a sound designer/composer for Thomas Dolby's company Headspace. After Headspace, Cascone went on to serve as the Director of Content for Staccato Systems, a spin-off company from CCRMA, Stanford University where he co-invented an algorithm for realistic audio atmospheres and backgrounds for video games called Event Modeling.[6] He returned to making music in 1999 and has since been releasing records using his own name[7] on various labels as well as his own label, anechoic (named after his last Heavenly Music Corporation release), which he established in 1996. Cascone has released more than 40 albums of electronic music since 1984 and has recorded/performed with Merzbow, Keith Rowe, Tony Conrad, Scanner, John Tilbury, Domenico Sciajno and Pauline Oliveros among others.

In academic writing, Cascone is known for his paper The Aesthetics of Failure, which outlined the use of digital glitches and systemic failure in the creation of post-digital and laptop music. He is also on the Advisory Board of the academic sound journal Interference based in Dublin, Ireland. Want to know more about Kim's path to creationAmbient Music in Csound

As the last documentation of PGR, which has now evolved into the Heavenly Music Corporation, The Chemical Bride is an aural equivalent of alchemy, the transmutation of sound through light and dark forces. Eight tracks of viscous audio concrete, ranging from the sinister drones of "Headful of Blue Sun" to the slightly less sinister gaseous ambience of "Oceanic & Atmospheric." "PGR's Kim Cascone consistently creates distinctive and appealing ambient works. This album, with its beautiful otherworldly sounds and interesting compositions, is no exception." 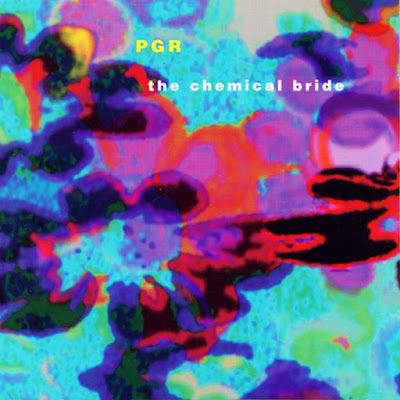 "What has always been our strength, our excitement, is the spices around us. From the taste of ginger, to the crisp sound of autumn leaves beneath a gentle walk, to the pulsating white of a full moon. Spices are everywhere, forever weaving." -- Don Falcone of Spice Barons

The barons of ambient have returned to their first full length album. The Spice Barons have been on the tongues of ambient connoisseurs since their breakthrough track "Spice of God" on the first From Here to Tranquility compilation. Since that time they have also had work on the John C. Lilly "E.C.C.O." CD, and on their side projects on the "Unidentified Floating Ambience" compilation CD. The high tech gurus continue in their quality-before-gimmicks approach to create only the best in spiced soundwaves. 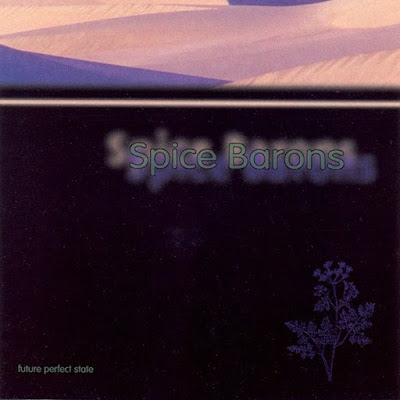 
Kim Cascone's first release following the dissolution of his popular Heavenly Music Corporation project is also a revisiting of some of the sonic territories of his earlier work as PGR. The album began as a single track to accompany Cascone's contribution to a book of essays about computer music development platform Csound, edited by Richard Boulanger, and expanded into a full-length CD at the behest of Boulanger and others who figured he was onto something. An exploration of themes combining bleeding edge digital technology with rootings about in computer music's prehistory -- Cascone used Csound to create acoustical models of early electronic instrument specs -- blueCube is a musical expostulation on the "alchemical space" specific to composing with machines, and is some of his most enthralling work to date. 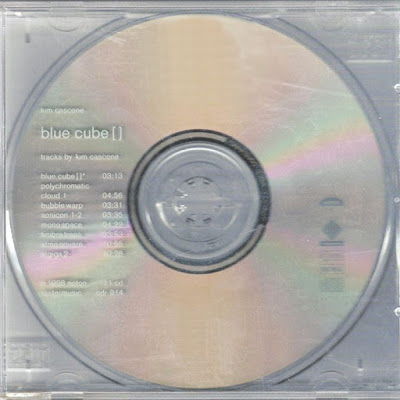 "This record, build in two parts, combines the work of Kim Cascone and Robin Rimbaud aka Scanner.
This is not any randomatic improvisation, it is more the result of a an intention, the envy to create a circular collaboration based on exchanges -- Scanner > Cascone > Scanner > Cascone > Scanner progressing in order to achieve the perfect structure.
The result is in the vein of the best Oval and Fennesz pieces." 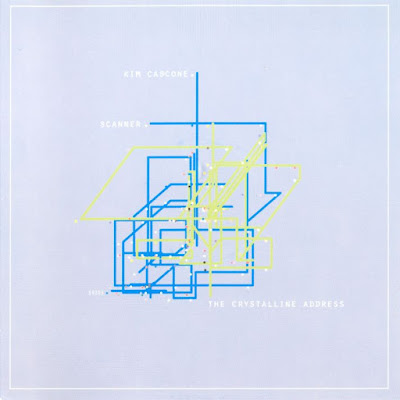 This album was created from recordings made in Madrid, on October 3, 2003. These recordings were later subjected to processing in order to create a continuum of recognizability - from sounds heard in our everyday surroundings to those heard only in our minds ear. This recording was mixed with the intent of creating an impression of Madrid rather than a documentation of an actual sonic environment. 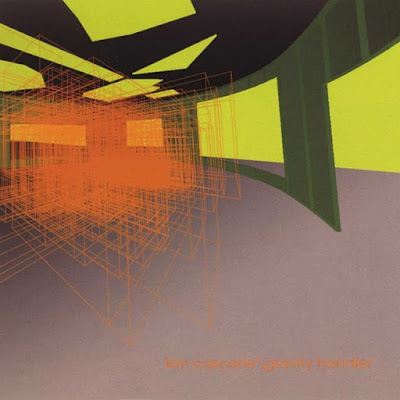