Anyone wanting to learn about the amazing history of Brasilian music will want this. The 4 album's cover a huge range of musical styles, artists, regions and eras of Brasil. It's a big country and is as varied and diverse as they get. The music of Brasil exemplifies this great diversity and is so original and distinct that thankfully we get to appreciate their diversity as well ....N'Joy

The popular music of the U.S. had its sources in the European folk and salon music of the colonists and in Black African musics brought over by slaves. Brazilian music is similar in derivation but with at least two significant differences. First, Brazil’s European influence came primarily from Portugal and Southern Europe instead of the British Isles. If that suggests to you less marching and more dancing, you would be right. And, secondly, the music of the indigenous peoples remained an influence in Brazil, whereas such music was almost totally ignored in the U.S. So, there are ingenious musical instruments like the berimbau, an arched bow with a gourd resonator whose single string is played with a stick. (The Brazilian slave trade may have plundered different parts of Africa than the American trade, and so brought different African musics to Brazil, but I am by no means knowledgable on that subject.) The result is a tradition of popular music in Brazil that is every bit as rich and varied as that of the U.S., but has taken off in different directions. Instead of ragtime there is, let’s say, chôro; instead of blues, samba; instead of country, forró; instead of jazz, bossa nova; instead of rock, MPB (música popular brasiliera). I don’t mean to imply these musics are all that similar, but merely to show that Brazilian music is a gallimaufry comparable to that of the U.S. And, of course, Brazilian music has influenced the music of the U.S., from Carmen Miranda to the bossa nova (which in turn was heavily influenced by American "cool" jazz). Even avant rocker Arto Lindsay (who was raised in Brazil) has recorded  O Corpo Sutil (the Subtle Body), which would fit comfortably in a collection of modern Brazilian music.

With such a variety, where to get started? How about a tidy introduction to four major styles of Brazilian music? Okay, here it is. (Yes, it came out three years ago and we are just getting around to reviewing it. But, that doesn’t make it less interesting.) This collection was produced by Jack O’Neil, who has done a superb job finding exemplary recordings and putting them together in truly listenable albums. Many of these recordings have never before been released in the U.S., so even if you are a fan of Brazilian music, there will be some pleasant surprises here. O’Neil has the rare knack of putting together compilations like this so they do not deteriorate into hurkey-jerky randomness. Each of these albums, while focusing on a major style of Brazilian music, also works simply as an album of great music. The four CDs are available as a boxed set with a very informative booklet or separately, in which case all you get is a track list. If you don’t spring for the whole set, I’d suggest you contact Blue Jackel and see if they will sell you the booklet–it’s well worth it. You can put a CD on for company while driving in your car or puttering around the house, but with the booklet, you can sit, listen, read and learn.

The transfer of all these different recordings to CD is mostly well done. O’Neil has done an excellent job adjusting the volume level (and, I think, judiciously equalizing the frequency range) from track to track, so that there is little of the jarring change of sound that can occur on some compilations. But there is also, on my system at least, a very minor tizz to the high-frequencies that puts a hint of an edge on some of the vocals and makes the drums sound a little more like sheets of metal than frame and skin. I suspect this is not due to the original source recordings, since it occurs on many of the tracks; perhaps it is an artifact of the particular analog-to-digital converter used. It is not a big problem–you probably won’t even notice it unless you listen to the set as closely and as many times as I have!–but it is a mar on an otherwise exemplary production.

On the "Folk and Traditional" album, we get a fast introduction to the roots of Brazilian music. This disk has the greatest variety of the four, encompassing field recordings as well as recordings by popular Brazilian artists from the first half of the century. The disk starts out, confounding expectation, with a 1941 recording by Carmen Miranda, she of the towering fruit basket headdresses. The song is a tribute to the Brazilian spirit ("I have in my body the scent of the samba") with an utterly infectious beat, playing Miranda’s energetic vocals over a simple background of guitar, percussion and chanted vocals, and a superb single-string guitar solo. Other highlights of the disk are two recordings of the wonderfully rough-voiced Wilson Moreira, one of which is a chôro by Pixinguinha, one of Brazil’s great popular composers. Chôro is late 19th century style mixing Portuguese harmonies with African call-and-response structure, played on guitars and other folk instruments with European trumpets and saxophones, and featuring improvisation. Sounds like a description of early jazz? You bet, but chôro has a purely Brazilian beat. And, like jazz, what is interesting is not the sources of the invention but the beauty of the result. A transcendent field recording of a Candomblé ceremony takes us right to the heart of Black Brazil. The Candomblé religion combines elements of African Spiritualism and Portuguese Catholicism. This is a vibrant live recording, with sweat and incense hanging heavy in the humidity. There is also a superb recording of a berimbau played by Papete, demonstrating the astonishing variety of sounds this simple instrument can create. If you have heard Airto Moreira on one of his recordings with or without his wife, Flora Purim, you may know the berimbau. Papete is one of the original virtuosos, who yields nothing to Airto. 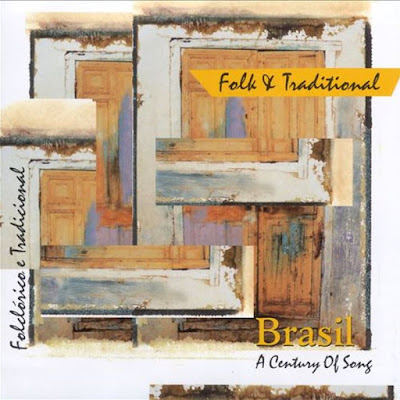 Carnaval in Rio de Janiero is the great party that occurs before Lent, the equivalent of Mardi Gras in New Orleans. And what is a party without music? During carnaval, musical troupes (the "escolas du samba," or samba schools) take to the streets of Rio for competition and partying. Guitars, batucada (batteries of percussion) and group singing are the order of the day. If the "Folk and Traditional" album is a real mixture, the "Carnaval" album is a much of a muchness, but that is probably appropriate for a nonstop party like Carnaval. Great for your next outdoor summer party. 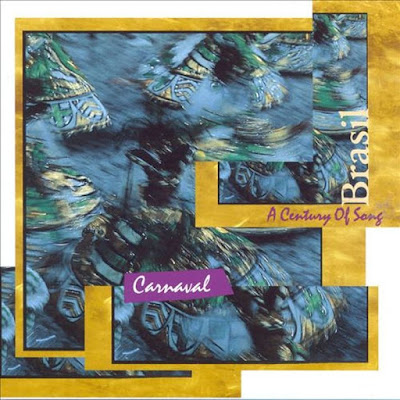 If you are of a certain age, you remember the bossa nova era. As far as that goes, in the what-goes-around-comes-around ’90s, we all know bossa nova. Created by Brazilian musicians influenced by American jazz–especially the "cool" sound of musicians like Stan Getz and Gerry Mulligan–bossa nova brought the street samba indoors to the night club. Composed, sophisticated and definitely cool, bossa nova took the world by storm mostly through derivative versions by everyone from Getz to Eydie Gorme. On the third album, you can hear the real stuff. The album appropriately starts with "A Felicidade," a tune from the movie  Black Orpheus (set during Carnaval) by bossa nova’s great composer Antonio Carlos Jobim. Jobim was probably the best known Brazilian musician worldwide, and the composer of dozens of wonderful tunes, including "One Note Samba," "Desafinado," "The Waters of March" and, of course, "The Girl from Ipanema." Also appropriately, the tune is sung by the great João Gilberto. Gilberto’s low-key delivery might remind you of Michael Franks, Boz Scaggs or J.J. Cale, all of whom I am sure have listened hard to him. But what makes him inimitable is his rhythmic artistry, which never fails to astound me. In "A Felicidade," listen to the way Gilberto, accompanying himself on guitar, places his syllables both ahead and behind the beat with the feel of a dancer. The rhythmic placement of his notes is utterly logical, yet I can’t predict where they will fall. He makes Franks and crew sound like heavy-footed plodders. The next two songs, performed by J.T. Meirelles and Beth Carvalho, make the bossa nova connection to the street samba clear, as does "Oh, What a Sight" by Oscar-Castro Neves, which incorporates a recording of a samba school into a complex bossa nova composition. The rest of the album moves more toward the "cool" sound, with both well-known bossa nova stars like Sylvia Telles (a gorgeous rendering of Jobim’s "Dindi"), Chico Barque, Toquinho Horta and Vinícius de Moraes as well as lesser known performers who are no less worth hearing. 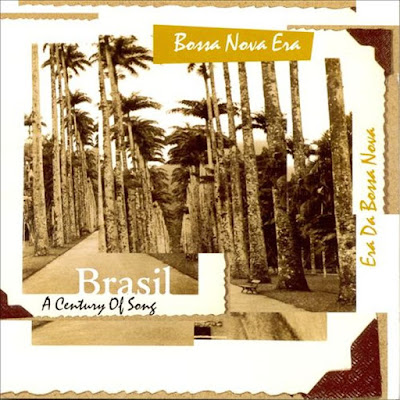 Ignited by the cultural movement called "tropicalismo" in Spanish-speaking South America or "tropicália" in Brazil, MPB, or Música Popular Brasileira, was Brazil’s musical contribution to the rock era. The final album strongly features Milton Nascimento, who is considered by many to be Brazil’s finest living musician. Milton is truly gifted, with a great voice and compositional skills, and astonishingly wide-ranging musical interests, from indigenous folk songs to rock to jazz and beyond. He has recorded many superb albums and he wrote the introduction to this set’s booklet. Here he is appropriately represented by three songs, befitting his importance. (I am a big fan.) The rest of the album gives a good representation of the wide variety of MPB. Highlights for me are Gal Costa’s exotic "É d’Oxum," Jorge Ben Jor’s infectious "O Dia Que O Sol Declarou O Sue Amor Pela Terra" and Ivan Lins’ sensous "Clareou" (there’s the berimbau again). Even with all the treasures, though, the wealth of MPB (and Brazilian music in general) is suggested by some of the great performers who are not represented here: Elis Regina, Caetano Veloso, Gilberto Gil, Maria Bethânia and Djavan, for example. Subjects for further research (see below) once you digest all this fine set has to offer. Thanks for your wonderful blog.

The flac link for Brasil, A Century of Song, Carnaval is broken. Any chance of a fix?

The other three flac links were working ok.