Hello,  snow is gone now, back to rain, back in time, back to the Aetix

Over the years, the Pretenders became a vehicle for guitarist/vocalist Chrissie Hynde's songwriting, yet it was a full-fledged band when it was formed in the late '70s. With their initial records, the group crossed the bridge between punk/new wave and Top 40 pop more than any other band, recording a series of hard, spiky singles that were also melodic and immediately accessible. Hynde was an invigorating, sexy singer who bent the traditional male roles of rock & roll to her own liking, while guitarist James Honeyman-Scott created a sonic palette filled with suspended chords, effects pedals, and syncopated rhythms that proved remarkably influential over the next two decades.  .....  N'Joy

Over the years, the Pretenders became a vehicle for guitarist/vocalist Chrissie Hynde's songwriting, yet it was a full-fledged band when it was formed in the late '70s. With their initial records, the group crossed the bridge between punk/new wave and Top 40 pop more than any other band, recording a series of hard, spiky singles that were also melodic and immediately accessible. Hynde was an invigorating, sexy singer who bent the traditional male roles of rock & roll to her own liking, while guitarist James Honeyman-Scott created a sonic palette filled with suspended chords, effects pedals, and syncopated rhythms that proved remarkably influential over the next two decades. After Honeyman-Scott's death, the Pretenders became a more straightforward rock band, yet Hynde's semi-autobiographical songwriting and bracing determination meant that the group never became just another rock band, even when their music became smoother and more pop-oriented.


Originally from Akron, OH, Hynde moved to England in the early '70s, when she was in her twenties. British rock journalist Nick Kent helped her begin writing for New Musical Express; she wrote for the newspaper during the mid-'70s. She also worked in Malcolm McLaren's SEX boutique before she began performing. After playing with Chris Spedding, she joined Jack Rabbit; she quickly left the band and formed the Berk Brothers.  In 1978, Hynde formed the Pretenders, which eventually consisted of Honeyman-Scott, bassist Pete Farndon, and drummer Martin Chambers. Later in the year, they recorded a version of Ray Davies' "Stop Your Sobbing" produced by Nick Lowe. The single made it into the British Top 40 in early 1979. "Kid" and "Brass in Pocket," the group's next two singles, also were successful. Their debut album, Pretenders, was released in early 1980 and eventually climbed to number one in the U.K. The band were nearly as successful in America, with the album reaching the Top Ten and "Brass in Pocket" reaching number 14.

During an American tour in 1980, Hynde met Ray Davies and the two fell in love. Following a spring 1981 EP, Extended Play, the group released their second album, Pretenders II. Although it fared well on the charts, it repeated the musical ideas of their debut. In June of 1982, Pete Farndon was kicked out of the band, due to his drug abuse. A mere two days later on June 16, James Honeyman-Scott was found dead of an overdose of heroin and cocaine. Pregnant with Davies' child, Hynde went into seclusion following Honeyman-Scott's death. In 1983, two months after Hynde gave birth, Farndon also died of a drug overdose.

Hynde regrouped the Pretenders in February 1983, adding former Manfred Mann's Earth Band guitarist Robbie McIntosh and bassist Malcolm Foster; the reconstituted band released "2000 Miles" in time for Christmas. The new Pretenders released Learning to Crawl early in 1984 to positive reviews and commercial success. Ending her romance with Ray Davies, Hynde married Jim Kerr, the lead vocalist of Simple Minds, in May of 1984.  Apart from a performance at Live Aid, the only musical activity from the Pretenders during 1985 was Hynde's appearance on UB40's version of "I Got You Babe." Hynde assembled another version of the Pretenders for 1986's Get Close. Only she and McIntosh remained from Learning to Crawl; the rest of the album was recorded with session musicians. Get Close showed the Pretenders moving closer to MOR territory, with the bouncy single "Don't Get Me Wrong" making its way into the American Top Ten in 1987. Hynde recorded another duet with UB40 in 1988, a cover of Dusty Springfield's "Breakfast in Bed."

Hynde's marriage to Kerr fell apart in 1990, the same year the Pretenders released Packed!, which failed to ignite the charts in either America or Britain. She was relatively quiet for the next few years, re-emerging in 1994 with Last of the Independents, which was hailed as a comeback by some quarters of the press. The album did return the Pretenders to the Top 40 with the ballad "I'll Stand by You." In the fall of 1995, the Pretenders released the live album Isle of View, then remained silent for a few years. Hynde finally returned in 1999 with an album of new material, Viva el Amor. Three years later, the Pretenders left their longtime label for Artemis. The reggae-tinged Loose Screw appeared in November and a tour followed in January 2003. During March 2005, the Pretenders were inducted into the Rock and Roll Hall of Fame. Only Hynde and Chambers attended the ceremony. After their Hall of Fame induction, the Pretenders continued touring as a four-part team (Hynde, Seymour, Hobson and Chambers). During 2005, bassist Hobson left and was replaced by Nick Wilkinson, marking the band's first line-up change in thirteen years.

The Pretenders' album Break Up the Concrete was released through Shangri-La Music on 7 October 2008. It was the band's first Top 40 album in the US in twenty two years. Tracks include "Boots of Chinese Plastic", "Don't Cut Your Hair", "Love's a Mystery", "The Last Ride" and "Almost Perfect".[7] With Hynde was the guitarist James Walbourne, pedal steel player Eric Heywood, bassist Nick Wilkinson and drummer Jim Keltner (on the album only). Chambers returned to the drums on tour with the band. A show from the tour, filmed at Shepherd's Bush Empire in London on 15 July 2009, was released on CD with bonus DVD / Blu-ray on 9 February 2010, titled Pretenders: Live in London.

Few rock & roll records rock as hard or with as much originality as the Pretenders' eponymous debut album. A sleek, stylish fusion of Stonesy rock & roll, new wave pop, and pure punk aggression, Pretenders is teeming with sharp hooks and a viciously cool attitude. Although Chrissie Hynde establishes herself as a forceful and distinctively feminine songwriter, the record isn't a singer/songwriter's tour de force -- it's a rock & roll album, powered by a unique and aggressive band. Guitarist James Honeyman-Scott never plays conventional riffs or leads, and his phased, treated guitar gives new dimension to the pounding rhythms of "Precious," "Tattooed Love Boys," "Up the Neck," and "The Wait," as well as the more measured pop of "Kid," "Brass in Pocket," and "Mystery Achievement." He provides the perfect backing for Hynde and her tough, sexy swagger. Hynde doesn't fit into any conventional female rock stereotype, and neither do her songs, alternately displaying a steely exterior or a disarming emotional vulnerability. It's a deep, rewarding record, whose primary virtue is its sheer energy. Pretenders moves faster and harder than most rock records, delivering an endless series of melodies, hooks, and infectious rhythms in its 12 songs. Few albums, let alone debuts, are ever this astonishingly addictive. Pretenders debuted at number 1 on the UK Albums Chart in the week of its release and stayed there for four consecutive weeks. It also made the top 10 on the Billboard 200 and was certified Platinum during 1982 by the RIAA. In 2003, Rolling Stone magazine ranked the album number 155 on its list of the 500 greatest albums of all time. 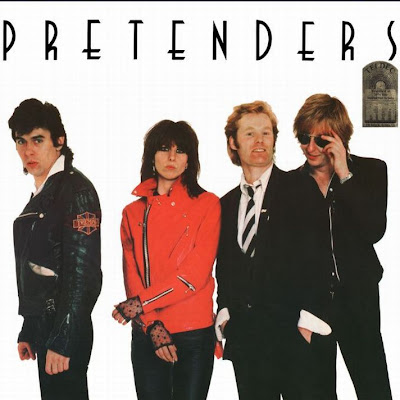 Essentially, this album is an unabashed sequel, offering more of the same sound, attitude, and swagger, including titles that seem like rips on their predecessors and another Ray Davies cover. This gives the record a bit too much of a pat feeling, especially since the band seems to have a lost a bit of momentum -- they don't rock as hard, Chrissie Hynde's songwriting isn't as consistent, James Honeyman-Scott isn't as inventive or clever. The first incarnation of The Pretenders was a tremendous band, and even if they offer diminished returns, it's still diminished returns on good material, and much of Pretenders II is quite enjoyable. Yes, it's a little slicker and more stylized than its predecessor, and, yes, there's a little bit of filler, yet any album where rockers as tough as "Message of Love" and "The Adultress" are balanced by a pop tune as lovely as "Talk of the Town" is hard to resist. And when you realize that this fantastic band only recorded two albums, you take that second album, warts and all, because the teaming of Hynde and Honeyman-Scott was one of the great pairs, and it's utterly thrilling to hear them together, even when the material isn't quite up to the high standards they set the first time around. 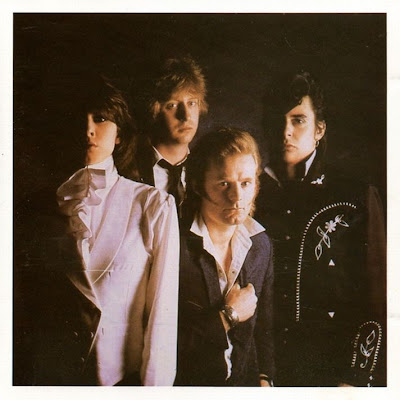 The Pretenders' meteoric rise came to a crashing halt in 1982, when drug abuse claimed the life of guitarist James Honeyman-Scott and forced Hynde and drummer Martin Chambers to dump bassist Pete Farndon, who would also succumb to an OD in April 1983. Hynde was forced by circumstance to reinvent the Pretenders for their third album, 1984's Learning to Crawl, but if the new edition of the group lacked some of the spark of the band that made the first two LPs, through sheer force of will Hynde created a masterpiece. Robbie McIntosh (guitar) and Malcolm Foster (bass) were recruited to join Hynde and Chambers, and the band was now officially a quartet. It was this line-up that recorded the majority of the tracks featured on Learning to Crawl. While Hynde hardly held back in her emotionally potent songwriting in the Pretenders' early work, on Learning to Crawl there's a gravity to her lyrics that blended with her tough but wiry melodic sense and streetwise intelligence to create a set of truly remarkable tunes. "Back on the Chain Gang" is a touching tribute to her fallen comrades that still sounds bitterly rueful, "Middle of the Road" is a furious rocker that explores the emotional and physical toll of a musician's life, "Time the Avenger" is a taut, literate examination of a businessman's adulterous relationship, "My City Was Gone" deals with the economic and cultural decay of the Midwest in a manner both pithy and genuinely heartfelt, and "2000 Miles" is a Christmas number that demonstrates Hynde can be warm without getting sappy. As a guitarist, Robbie McIntosh brought a simpler and more elemental style to the Pretenders than James Honeyman-Scott, but his tough, muscular leads fit these songs well, and bassist Malcolm Foster's solid punch fits Chambers' drumming perfectly. Three albums into her recording career, Chrissie Hynde found herself having to put the past to bed and carve out a new beginning for herself with Learning to Crawl, but she pulled it off with a striking mixture of courage, strength, and great rock & roll; with the exception of the instant-classic debut album, it's the Pretenders' finest work. Hynde named the album "Learning to Crawl" because her daughter, Natalie Rae Hynde, was learning to crawl at the time that Chrissie was trying to determine a name for the album. 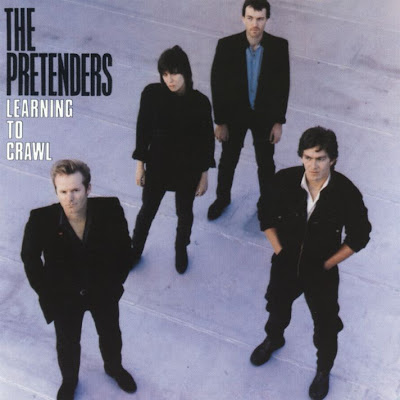 I was listening to Learning to Crawl just yesterday wishing I still had my copy of their first album.

Chrissy Hynde's autobiography is one of the great rock'n'roll autobiographies. No holds barred, no punches pulled. The first LP was five years in the making, it was a case of waiting for the right genius guitarist. Honeywell-Scott was that genius. But, hell, drugs. The brilliant first album sometimes seems like a by-product of the band's way of scoring.