Hello, more music from the 'mother'land, it's been ravaged and plundered by outsiders ever since the Romans decided to exterminate the Carthagen competion (165 BC) a city-state that had florished for 1,000 years and now historians have a hard time finding anything.. that's Roman destructive efficiency for you.. anyway many raiders have followed in their footstep since, and yet Africa hasn't lost it's vibrancy (dare i say testament to the human spirit). Making music is still a collective undertaking, though there are specialists, the west african griots are more then singers/musicians in a way they are history teachers aswell and embed the spirit of the tribe within them... Today, a griot that has stepped out of his continent and took his art into the world, Foday Musa Suso.

In West Africa, the Griot is a musician, entertainer, historian, myth maker and more. For 800 years this expert musician class have been "walking libraries," responsible for preserving the region's wisdom and lore. Epic songs, genealogies and one of the world's richest instrumental traditions have been passed down through arduous apprenticeships, ensuring that the Jali Kunda (Griot family) endures.

Foday Musa Suso is a Mandingo griot (the griot is the hereditary musician/oral historian of the Mandingo people). He is a virtuoso kora player, drummer, and composer. Suso was born in the Sarre Hamadi Village, Gambia. Initially taught by his father, at the age of eleven Suso was sent away to study under a master kora player, Saikou Suso, after undergoing seven years of rigorous study, at age eighteen he became a full-fledged griot.

Suso then took his kora (a 21-string harp-lute), and traveled through Africa, America and Europe, providing audiences with their first taste of Griot music. From 1975 through 1977 he held the post of Kora Instructor at the Institute of African Studies, University of Ghana. In 1977, Suso established himself in the United States, founding the Mandingo Griot Society where he taught jazz musicians to play new arrangements of Mandingo music. Their first record featured the late American jazz musician Don Cherry.

In 1984, the organizing committee of the Olympic games approached Herbie Hancock for the composition of the official theme music for the field events. Wanting to evoke the roots of man, Herbie turned to Suso. Their collaboration resulted in the rousing "Junku," and continued with Suso composing for Herbie's next album, "Sound System," and later with the highly acclaimed duet album, "Village Life."

Suso was a featured instrumentalist on the Philip Glass soundtrack for the film Powaqattsi, and collaborated with Glass on the score for the American premiere of Jean Genet's The Screens, which opened at Minneapolis' Guthrie Theater in the fall of 1989. Suso has toured with the Kronos String Quartet and their recordings are part of the Pieces of Africa release.

For Jali Kunda, Foday Musa Suso returns to his native village in Gambia with legendary producer Bill Laswell. They visit Senegal and Guinea-Bissau to encounter their Griots, learn their stories and hear their songs. Back in the United States, Suso and Laswell anticipate the next century of Griot music as Suso performs original works by avant-classical minimalist Philip Glass, saxophone innovator Pharoah Sanders, and muscular funksters Mandingo. 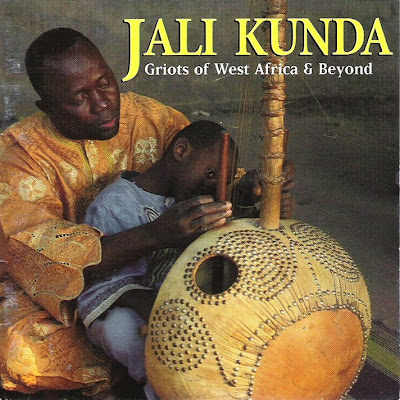