***** ***** ***** ***** ***** ***** ***** ***** ***** *****
Hello, Into the BPM is on the remix today. Some don't like remixes, not me, i like remixes. I think it's a great expression of not only the power of music but of it's versatility aswell. Some remixers stay close others veer off widely, some give it their own 'sound' and basicly make it their own. like Orbital's Diversions, well there maybe 5 versions of Lush on it, but that dont make it boring, quiet the contrary, it's a great and diverse album and yes Underworld certainly makes it's own 'Nobasswithmyheadman". Sven Väth got some serious slack with his second concept album a bit too O.T.T. for most, but when he gave it over to remixing the result was excellent, Speedy J 's remix got even a single release , Hardfloor and Alter Ego certainly knew what to do with it and yes well Underworld made it their own again..Almost 2,5 hours of dance music thusfar, but thats get topped by my final date of the day, Wasted, a double cd compiling the best electronic/dance tracks of first 12 issues of the music mag Volume cdees. Again mostly remixes .. accompanied by a 192 page booklet which unfortunately i can't share, still lots to enjoy and explore today...with or without mindexpansion..a nice surroundsystem will do ...wink

The brothers Hartnoll, Phil and Paul, grew up in Dartford, Kent, listening to early-'80s punk and electro, during the mid-' 80s, Phil worked as a bricklayer while Paul played with a local band called Noddy & the Satellites. They began recording together in 1987 with a four-track, keyboards, and a drum machine, and sent their first composition, "Chime" (recorded and mastered onto a cassette tape for a total production cost of £2.50), into Jazzy M's pioneering house mix show Jackin' Zone, as a result "Chime" was released as a single in 89. The following year, ffrr Records re-released the single and signed a contract with the duo -- christened Orbital in honor of the M25, the circular London expressway which speeded thousands of club kids to the hinterlands for raves during the blissed-out Summer of Love. "Chime" hit number 17 and saw them on Top of the Pops, where the Hartnolls stared at the audience from behind their synth banks.

Orbital's untitled first LP (the "green album") was released in September 1991, consisted of all-new material -- that is, if live versions of "Chime" and the fourth single "Midnight" are considered new works. Unlike the Hartnolls' later albums, though, the debut was more of a collection of songs than a true full-length work, its cut-and-paste attitude typical of many techno LPs of the time. During 1992, Orbital continued their chart success with two EPs. The Mutations remix work -- with contributions from Meat Beat Manifesto, Moby, and Joey Beltram, Orbital returned Meat Beat's favor later that year by remixing "Edge of No Control," and later reworked songs by Queen Latifah, the Shamen, and EMF as well.

Their career took off in 1993-1994, with the release of the EPs "Lush" and "Radiccio" and their second album ,also untitled, but nicknamed the "brown" album as an alternative to the "green" debut, it unified the disjointed feel of its predecessor and hit number 28 on the British charts. The Hartnolls continued the electronic revolution that fall during their first American tour. Phil and Paul had first played live at a pub in Kent in 1989 -- before the release of "Chime" -- and had continued to make concert performance a cornerstone of their appeal during 1991-1993, featuring live projections, live musical arranging and sequencing on the fly, making their shows entertaining, improvised and truly "live". On a tour with Moby and Aphex Twin, Orbital proved to Americans that techno shows could actually be diverting for the undrugged multitudes. That summer proved to be the pinnacle of Orbital's performance ascent; an appearance at Woodstock 2 and a headlining spot at the Glastonbury Festival (both to rave reviews) confirmed the duo's status as one of the premier live acts in the field of popular music, period.

The U.S.-only albumlength Diversions EP released in March 1994 as a supplement to the second LP -- selected tracks from both the Peel Sessions and strong remixes from the album's single, "Lush." Following in August 1994, Snivilisation became Orbital's first named LP. The duo had not left political/social comment completely behind on the previous album -- "Halcyon + On + On" was in fact a response to the drug used for seven years by the Hartnolls' own mother -- but Snivilisation pushed Orbital into the much more active world of political protest. It focused on the Criminal Justice Bill of 1994, which gave police greater legal action both to break up raves and prosecute the promoters and participants. The wide variety of styles signalled that this was Orbital's most accomplished work. Snivilisation also became the duo's biggest hit, reaching number four in Great Britain's album charts.

During 1995, the brothers concerned themselves with touring, headlining the Glastonbury Festival in addition to the dance extravaganza Tribal Gathering. In May 1996, Orbital set out on quite a different tour altogether; the duo played untraditional, seated venues -- including the prestigious Royal Albert Hall -- and appeared on-stage earlier in the night, much like typical rock bands. Two months later, Phil and Paul released "The Box," a 28-minute single of orchestral proportions. It screamed of prog rock excess -- especially the inclusion of synth harpsichords -- and appeared to be the first misstep in a very studied career. The resulting In Sides, however, became their most acclaimed album, with many excellent reviews in publications that had never covered electronic music. It was over three years before the release of Orbital's next album, 1999's Middle of Nowhere. An aggressive, experimental album titled The Altogether emerged in 2001, and one year later Orbital celebrated over a decade together with the release of the retrospective Work 1989-2002. With the release of 2004's Blue Album, however, the Hartnolls announced that they were disbanding Orbital. After the split, Paul began recording music under his own name, including material for the Wipeout Pure PSP game and a solo album (The Ideal Condition), while Phil formed another duo, Long Range, with Nick Smith and released Madness and Me last year. 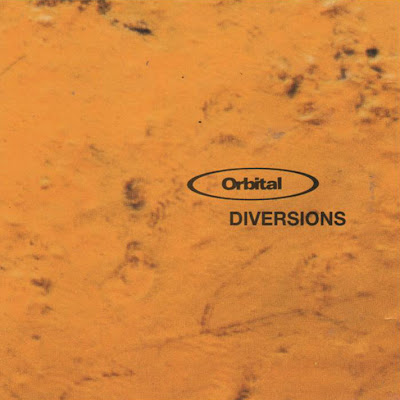 Sven Väth was the lead singer of a dance-pop group named OFF, that had a big hit around the world with "Electric Salsa". The band later disintegrated, leaving Väth free to pursue his interest in the hard trance underground of Frankfurt. Väth became a DJ of note for his marathon sets and he founded Harthouse Records in 1992 with Matthias Hoffman and Heinz Roth. Blessed with an agreement connecting Harthouse (plus its subsidiaries Eye-Q and Recycle or Die) to the American major label Warner Bros., Väth released his first solo album, An Accident in Paradise, in 1993. An attempt to connect techno and trance to the concept-album ideas of prog-rock. Signs of excess are generally frowned upon in the dance community, however, and An Accident in Paradise died a quick death on American shores. However he remains by far the most successful DJ in the world. His second album, The Harlequin, The Robot & The Ballet Dancer, was released in Europe in 1994, but its American release was delayed more than a year and sank much quicker than its predecessor. The remix-album "Touch Themes of Harlequin -Robot- Ballet-Dancer" was released in 95, including remixes of B-Zet, Underworld and Speedy -J, whose remix of "Ballet Fusion" is also released as a single. Sven is without exaggeration Europe's Nr. 1 DJ and simultaneously successful all over the world: from Japan over Mexico to the US, where he is elected to be the first DJ at the famous "Lollapalooza Festival".

Together with B-ZET (Steffen Britzke), Sven starts a new project Astral Pilot and with "Electronic Acupuncture" he again releases a milestone setting album apart from the mass-compatibility of many other releases. After recording this album, Väth laid low for several years, releasing just the soundtrack for the Ralf Huettner movie "Der Kalte Finger" ("The cold finger") and severing his connections with Eye Q/Harthouse, preferring to concentrate on DJing instead. Then in 1998, he returned with a contract to Virgin and his third album, Fusion, and starts his FUSION World Tour, playing not only all over Europe but also in Asia, America and Canada. For the sake of keeping a platform for electronic music in Frankfurt alive, he initiates Cocoon Club. He chooses U60311 as location, where every second Friday of the month Cocoon Club takes place. Cocoon stands for metamorphosis, development, new birth, surprises.. It sprouts further into Cocoon Clubbing, a mobile event agency touring in Germany's most well-known techno clubs.

Meanwhile the Fusion remix album- 6 in themix is released. 2000 saw the release of Contact, it's a Frankfurt project - not only regarding the music it embodies( styling, graphics, photography). Another world tour follows , meanwhile Cocoon grows unstoppably. With Cocoon Recordings, apart from several single releases, the Cocoon Compilation "A" is released in June 2000. Cocoon is now represented in Ibiza each Monday with 14 dates at the Amnesia. Sven's idea of offering the crowd a multi-sensual experience, is brought to life in the most perfect way in Ibiza. In order to provide his fans with a memory of this summer Sven decides to produce his first official Mix-CD ever: "Sven Väth In The Mix - The Sound Of The First Season" . Meanwhile he's reached the eight season and has released several more albums, and done corresponding world DJ tours. And has stayed on top for 15 years now...he knows his business i would say. 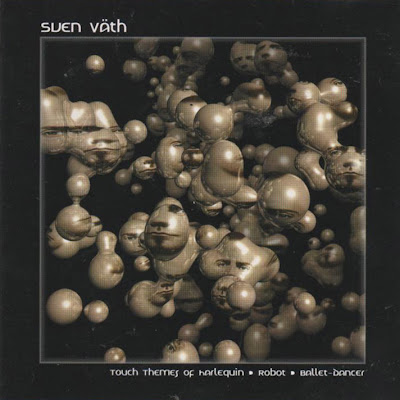 Volume magazine was a series of compact disc compilation albums that were published in the UK in the early to mid 1990s. The albums typically contained exclusive tracks and remixes from a diverse range of indie artists. Each album was packaged with a 192-page booklet that contained features on the artists, and original articles. The booklet was the size and shape of a CD jewel case, and was usually packaged with the CD case in a cardboard sleeve. Volume One, the first issue, was published in September 1991. The series came to an end in January 1997, with Volume Seventeen. Of the two "best of" compilations, Wasted rounded up electronic/dance tracks. 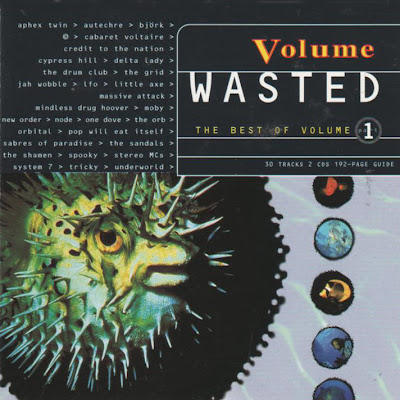 Genius mate, thanks for ripping that, I can sell my old tape version of this on Ebay now! 80)

"Touch Themes" was released on CD and vinyl with slightly different track listings.
www.discogs.com/Sven-V%C3%A4th-Touch-Themes-Of-Harlequin-Robot-Ballet-Dancer/master/14067
You posted the CD but I've got them both - ho ho ho

Would Love a repost of Sven Väth if you could! Thanks for the time and great blog.