Hello, the Tour got off to a dreary start today, pity considering all the effort the Germans put in, the weather specially during a time trial can throw a spanner in, biggest victim Valverde who, what turned out broke his knee-cap, Bahrain-Merida’s captain Ion Izagirre went down in the same corner and has left the race too, winner of the day undoubtedly Froome who under the same conditions won 40 seconds on the main GC contenders of which Porte did best during the worst of the weather which had followed a lul in the rain during which stage winner Geraint Thomas had ridden as well as a number of riders that qualified surprisingly well ahead of the GC riders, yes it is more fun to compute....

Today's Artist is an American composer, best known for his work scoring films for director David Lynch, notably Blue Velvet, the Twin Peaks saga (1990–1992, 2017), The Straight Story and Mulholland Drive.He received the 1990 Grammy Award for Best Pop Instrumental Performance for his "Twin Peaks Theme", and has received a Lifetime Achievement Award from the World Soundtrack Awards and the Henry Mancini Award from the American Society of Composers, Authors and Publishers.. ....N'Joy

Badalamenti was born in Brooklyn, New York to an Italian family; his father, who was of Sicilian descent, was a fish market owner. He began taking piano lessons at age eight. By the time Badalamenti was a teenager, his aptitude at the piano earned him a summer job accompanying singers at resorts in the Catskill Mountains. He received a Bachelor of Arts degree from the Eastman School of Music and then earned Master of Arts degrees in composition, French horn, and piano from the Manhattan School of Music in 1960.

Badalamenti scored films such as Gordon's War, and Law and Disorder, but his big break came when he was brought in to be Isabella Rossellini's singing coach for the song "Blue Velvet" in David Lynch's 1986 film Blue Velvet. Inspired by This Mortal Coil's recent cover of Tim Buckley's "Song to the Siren", Lynch had wanted Rossellini to sing her own version, but was unable to secure the rights. In its place, Badalamenti and Lynch collaborated to write "Mysteries of Love", using lyrics Lynch wrote and Badalamenti's music. Lynch asked Badalamenti to appear in the film as the piano player in the club where Rossellini's character performs. This film was the first of many projects they worked on together.

After scoring a variety of mainstream films, including A Nightmare on Elm Street 3: Dream Warriors and National Lampoon's Christmas Vacation, he scored Lynch's cult television show, Twin Peaks which featured the vocals of Julee Cruise. Many of the songs from the series were released on Cruise's album Floating into the Night. From the soundtrack of the television series, he was awarded the Grammy Award for Best Pop Instrumental Performance for the "Twin Peaks Theme".

Other Lynch projects he worked on include the movies Wild at Heart, Twin Peaks: Fire Walk with Me, Lost Highway, Mulholland Drive (where he has a small role as a gangster with a finicky taste for espresso), and The Straight Story as well as the television shows On the Air and Hotel Room. Other projects he has worked in include the television film Witch Hunt, and the films Naked in New York, The City of Lost Children, A Very Long Engagement, The Wicker Man, Dark Water and Secretary. He has also worked on the soundtrack for the video game Fahrenheit (known as Indigo Prophecy in North America).

He was composer for director Paul Schrader on such films as Auto Focus, The Comfort of Strangers and Dominion: Prequel to the Exorcist. In 1998, Badalamenti recorded "A Foggy Day (in London Town)" with artist David Bowie for the Red Hot Organization’s compilation album Red Hot + Rhapsody a tribute to George Gershwin which raised money for various charities devoted to increasing AIDS awareness and fighting the disease. In 2005, he composed the themes for the movie Napola (Before the Fall), which were then adapted for the score by Normand Corbeil. In 2008, he directed the soundtrack of The Edge Of Love, with Siouxsie, Patrick Wolf and Beth Rowley on vocals.

Badalamenti received the Lifetime Achievement Award at the World Soundtrack Awards in 2008. On July 23, 2011, the American Society of Composers, Authors and Publishers presented Badalamenti with the Henry Mancini Award for his accomplishments in film and television music.

The original score to A Very Long Engagement, the Jean-Pierre Jeunet vehicle for actress Audrey Tatou, was written and conducted by Angelo Badalamenti, infamously inseparable from the nightmarish big-budget cinema of David Lynch. While atmospherics play a role in this score -- mainly on the cues "Heartbeat to a Touch" and "Mathilde's Theme" -- most of what's on offer here is the lush aspect of Badalamenti's writing: tightly controlled yet swirling strings; a generous sense of space; and, above all, an uncomplicated if sideways approach to illustrating the frame. The brooding opening theme, the taut moments of "Our Soldier's Letters," and the gorgeous oboe, strings, and harp interlude in "Kissing Through Glass" make this a truly enjoyable, if undramatic, score. While it may provide some engaging listening on its own, this does not feel or sound like a body of music that can be taken as a separate work from the film it illustrates. 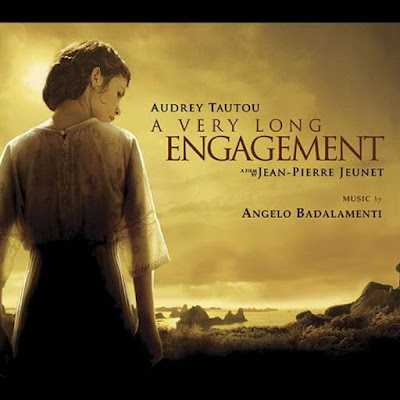 Composer Angelo Badalamenti's score for director Neil La Bute's 2006 remake of Robin Hardy's 1973 film The Wicker Man (both based on Anthony Schaffer's novel) is very different from the music for the first film, in part because the setting is different. La Bute has moved the story from Scotland to the Pacific Northwest, eliminating the basis for Scottish folk music. Instead, Badalamenti turns out one of his typically moody, atmospheric scores. Unlike other composers, who match dramatic moments in a film with often highly contrasting musical cues, Badalamenti here creates music in nearly a single mood throughout, his pieces slow-moving and based on a few major themes (in minor keys). The changes are gradual over the course of the soundtrack. The music begins in a more traditional orchestral mode, but as it goes on, electronic sounds are added here and there, so that the music slowly becomes stranger and more ominous, mirroring the story about a police officer in search of a missing child on a remote island who discovers a bizarre, pagan cult. Badalamenti's approach results in a more consistent, cohesive style than most scores manage to achieve. 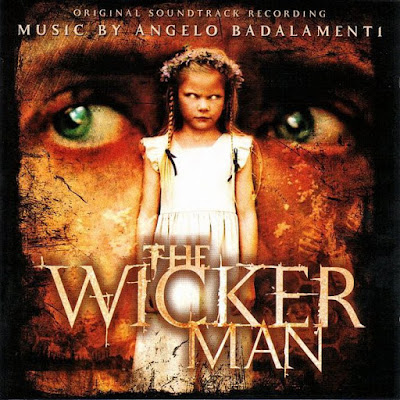 The Air Is on Fire played on two floors of a Paris gallery during a 2007 exhibition of David Lynch’s visual art. Lynch and sound editor Dean Hurley have called the 41-minute piece an “interactive soundscape,” and it has the sequential, impressionistic effect of film.

Has anyone ever accused David Lynch of making background music? It seems unlikely—sound design is such an integral part of his filmmaking that it usually says as much as the images. The Air Is on Fire is trickier, because the sound Lynch made for it literally is background music. It played on two floors of a Paris gallery during a 2007 exhibition of Lynch’s visual art. While I imagine Lynch and sound editor Dean Hurley didn’t intend their work as background—they’ve called it an “interactive soundscape”—the setting gave them less control over the marriage of sound and image than film offers. Few visitors would hear the exact same thing while looking at any given piece of art, and whether any would absorb the entire 41-minute soundtrack in real time was out of Lynch’s hands. Those factors increase the range of effects the piece could have—practically to infinity—but they also increase the chances that it would be experienced as sonic wallpaper.

It may be cliche to call instrumental music “cinematic,” but The Air Is on Fire clearly has the sequential, impressionistic effect of film. It’s a movie projected into the head through the ears. Part of what makes it so cinematic is the way it balances the narrative and the abstract, much like Lynch’s films. There are clear steps and turns, obvious moves forward and significant retreats. But there are also moments of pure texture, in which creating an indefinite feeling is more important than painting a specific picture. There are points in between, too, and those are the most fascinating: a section that sounds like a slowed-down show tune underwater, a rumble that could either be the echo of a cave or the ghosts of human voices, a dramatic turn that’s like a symphonic string section shot into space. As all these elements melt into one uniterrupted stream, it’s easy to enjoy as sonic drift, as a dark river to float down. But focus your ears a bit and more profound, moving moments emerge.

How Lynch and Hurley compare in those moments to musicians more seasoned at this kind of music is a tough question. I’m sure much of what they do here has been done by others. But really, Lynch has developed as deep a sonic vocabulary as anyone - he’s just done it through an audiovisual medium rather than a purely aural one. And besides, it doesn't sound like he was worried about breaking ground here. Even at its densest, The Air Is on Fire is pretty simple sonically, which gives it a universal tone. It’s not about cutting-edge techniques or never-heard-before concoctions. It’s about using sound to tell a wordless story and evoke undefined emotions. On those counts, it succeeds thoroughly. 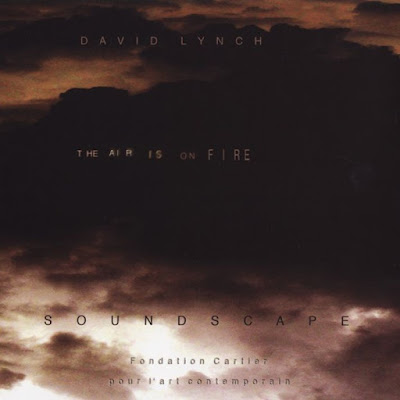 The Twin Peaks Archive by David Lynch and Angelo Badalamenti is an album with rare and unreleased tracks from both the television series as well as the prequel film.The counter officially stops at a whopping 212. Two hundred and twelve previously unreleased Twin Peaks tracks. The catalog was initially released between 2011 and 2012 via davidlynch.com. None of the 212 songs were —at least in their full-length form— previously included in the Music From Twin Peaks, Twin Peaks Season Two Music And More and   Twin Peaks: Fire Walk with Me soundtracks. So much material here covering both the TV series and film. Everything from familiar cool jazz, and percussion shuffles the series is known for, to the deep brooding synthesizer moods and ambiences of the film score. Listening to it reminds me of again why the show impacted pop culture the way it did. Coincidentally, Death Waltz finally reissued its long awaited vinyl release of the original Twin Peaks soundtrack just days ago, and the liner notes have Mr. Badalamenti remarking Twin Peaks as being his defining work, this compilation showing just how great he is at sculpting these surreal atmospheres.Rare Twin Peaks production stills appeared in the background on David Lynch’s website.

There are currently no plans to release Twin Peaks Archive by Angelo Badalamenti and David Lynch as a physical album, and they’ve been removed from davidlynch.com. But today, you can purchase download the entire catalog of nearly 10 hours of music as a digital download for only US $9.90 . Here, expect every Sundaze posting to end with 70 minutes plus batch of tracks the coming 8 weeks. 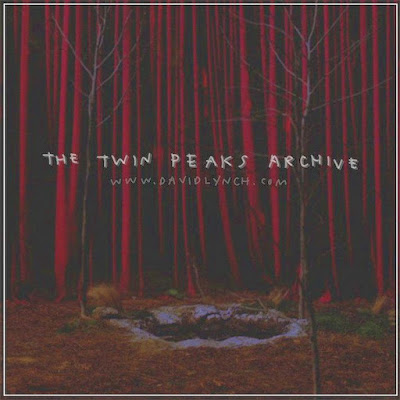 Thank you, Rho. Your generosity is much appreciated.

Thanks for this Badalamenti series!!! So many things I wasn't even aware of!

I would be most obliged if you might reupload Vol. 7 of the Twin Peaks Archive by David Lynch and Angelo Badalamenti!

Hi Rho, is this post due for a re-up? If so i would love a re-up of the twin peaks archive vol 7 in flac. Cheers mate:)