Hello, so the latest bug scare on the internet is called Shellshock, a hefty name, who comes up with those names, hackers themselves perhaps on their darkweb chat fora, anyway as always they are after our (credit card) data and thefts probably won't be reported-these rarely are, after all the consumers shouldn't be frightened...leave that to that fruitcompany , iOS 8.0.1 pulled from App Store after flawed software 'turned iPhones into iPods' hahahaha that certainly trumps the bending issue.

The Staple Singers were an American gospel, soul and R&B singing group. Roebuck "Pops" Staples (1914–2000), the patriarch of the family, formed the group with his children Cleotha (1934–2013), Pervis (b. 1935), Yvonne (b. 1936), and Mavis (b. 1939). While the family surname is "Staples", the group used the singular form for its name, "The Staple Singers". The family began appearing in Chicago-area churches in 1948, and signed their first professional contract in 1952. During their early career they recorded in an acoustic gospel-folk style with various labels: United Records, Vee-Jay Records, Checker Records, Riverside Records, and then Epic Records in 1965. It was on Epic that they began moving into mainstream pop markets. ......N'joy

The Staples' story goes all the way back to 1915 in Winona, Mississippi, when patriarch Roebuck "Pops" Staples entered the world. A contemporary and familiar of Charley Patton's, Roebuck quickly became adept as a solo blues guitarist, entertaining at local dances and picnics. He was also drawn to the church, and by 1937 he was singing and playing guitar with the Golden Trumpets, a spiritual group based out of Drew, Mississippi. Moving to Chicago four years later, he continued playing gospel music with the Windy City's Trumpet Jubilees. A decade later Pops Staples (as he had become known) presented two of his daughters, Cleotha and Mavis, and his one son, Pervis, in front of a church audience, and the Staple Singers were born.

The Staples recorded in an older, slightly archaic, deeply Southern spiritual style first for United and then for Vee-Jay. Pops and Mavis Staples shared lead vocal chores, with most records underpinned by Pops' heavily reverbed Mississippi cotton-patch guitar. In 1960 The Staples signed with Riverside, a label that specialized in jazz and folk. With Riverside and later Epic, The Staples attempted to move into the then-burgeoning white folk boom. Two Epic releases, "Why (Am I Treated So Bad)" and a cover of Stephen Stills' "For What It's Worth," briefly graced the pop charts in 1967.

In 1968 The Staples signed with Memphis-based Stax. The first two albums, Soul Folk in Action and We'll Get Over, were produced by Steve Cropper and backed by Booker T. & the MG's. The Staples were now singing entirely contemporary "message" songs such as "Long Walk to D.C." and "When Will We Be Paid." In 1970 Pervis Staples left and was replaced by sister Yvonne Staples. Even more significantly, Al Bell took over production chores. Bell took them down the road to Muscle Shoals, and things got decidedly funky.

Starting with "Heavy Makes You Happy (Sha-Na-Boom Boom)" and "I'll Take You There," The Staples counted 12 chart hits at Stax. When Stax encountered financial problems, Curtis Mayfield signed The Staples to his Curtom label and produced a number one hit in "Let's Do It Again." The Staples went on to continued chart success, albeit less spectacularly, with Warner, through 1979. One more album followed on 20th Century Fox in 1981. After a three-year hiatus, they signed a two-album deal with Private I and hit the R&B charts five more times, once with an unlikely cover of Talking Heads' "Slippery People."

The Staple Singers found a new audience in 1994 when they teamed with Marty Stuart to perform "The Weight" on the Rhythm, Country & Blues LP for MCA. Sadly, Pops passed away on December 19, 2000, shortly after suffering a concussion due to a fall in his home. Cleotha died in February 2013 after a decade with Alzheimer's disease. Throughout the 2000s and early 2010s, Mavis released excellent solo material for the Alligator and Anti labels.

Originally released on Epic in 1965 as a live in-church session, Legacy's 1991 reissue of Freedom Highway includes two of the original LP tracks supplemented by some truly spirited late-'60s Epic recordings. Despite the glaring omissions, Freedom Highway never feels like a hastily thrown-together compilation. Instead, it follows an arc that deftly mirrors the religious, political, and social fervor of the '60s as filtered through the warm vibrato of Pops Staples' amplifier and the golden throats of his brood. Gospel standards like "Will the Circle Be Unbroken" and "Wade in the Water" benefit from the full band arrangements, giving them a swift kick of rock & roll that would eventually morph into the soul-funk sound of their popular '70s period. Pops, inspired by his meeting with Martin Luther King, Jr., contributes the wickedly infectious title cut -- one of the two live tracks from the original -- and the incendiary "Why Am I Treated So Bad," a bluesy lament inspired by the hardships of the "Little Rock 9." As always, the vocals and harmonies are nothing short of astounding, most notably on the Mavis Staples-led "Move Along Train" -- never has gospel sounded so sexy. Each song bristles with emotion and resonates deeper with every repeated listen, resulting in an experience that transcends scripture while remaining true to its alternately redemptive and fiery foundations. Freedom Highway captures a family approaching the cusp of catharsis, and its charms lie in the world-weary delivery of its message. Their devotion has been tested and their hands have been bloodied, but their faith has grown into an endless garden because of it, and by the time they reach the spookiest version of "This Train" ever put to tape, listeners will no doubt feel as empowered as the once doomed passengers inside.

It's incredible music - passionate, powerful, profoundly musical and spiritual and relevant. This is before the Staple Singers moved to Stax and attained more mainstream success, and it is firmly in the Black Gospel tradition, but with clear social messages. A moving musical experience. 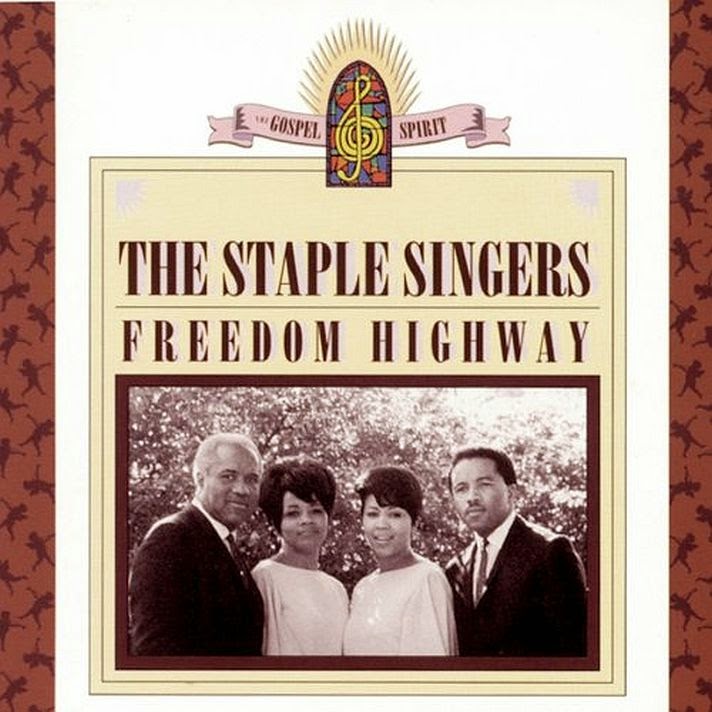 This is one you are probably going to have to search out, but this gem is worth all the effort. First, take the stunning voices of the Staple Singers, with the closely blending harmonies that can only come from the years of a family singing together. Put in the crack vibrato guitar of Pops (he was a blues player early on), add in a top-notch rhythm section that play as close as it gets, and throw in the Memphis Horns. Then add some material that was just about custom-tailored for them, mixed and mastered by Steve Cropper, and you have the makings of a fantastic disc. Still, how many times have we seen all the right ingredients and been disappointed? Not this time. The only disappointment might come from the brevity of the disc; you just want it to continue. The power and majesty that these voices carry comes as close to heaven as can be felt here on earth. They are truly performers who give their all. There are few performers who could rival Otis Redding, and to try and do one of his songs while he was still alive was almost considered sacrilege, yet listen to what they do with "(Sittin' On) The Dock of the Bay." It is a completely different take, yet it loses absolutely nothing and in fact gains a new dimension with their controlled power. True, it probably helps that Steve Cropper, the co-writer of the song, is leading the backing band. Two of the highlights of an incredibly strong disc are "Slow Train," for its slow adept building of potency, and "The Weight." It is a vital testament to belief and love, and you will thank yourself for following a hunch. Their second Stax release was similar to Soul Folk in Action. The album's highlight is Randall Stewart's "When Will We Be Paid?" 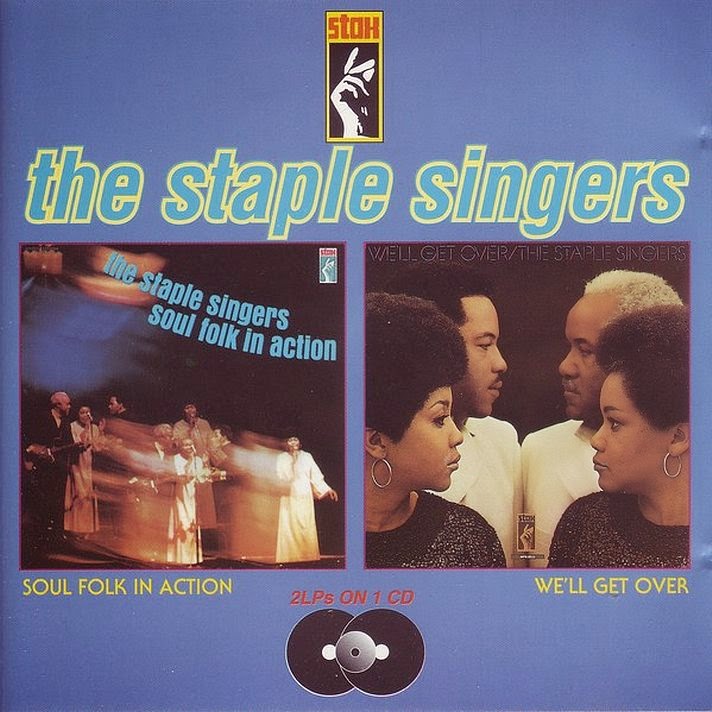 This album represents the Staples and Stax during the time of Wattstax when the label was entering into it's second golden age. Throughout the entire album the Stax styled funk is turned up really heavy and as far as Mavis is concerned her wailing,grunting and expansive singing really achieved it's full flower and impact. Two of these songs actually crossed the Staples over big time into the pop world and those are of course "Respect Yourself" and "I'll Take You There". Both feature slinky,often stop and start grooves and inspirational messages that anyone with a heart can feel inner peace and joy from hearing. Yes their core soul audience who impacted heavy but everyone was invited to come on these rides as they occured and still do each time these songs show up on an oldies or retro soul radio station. The entire album is endowed with this spirited type of sound from the uplifting and onlooking "This Old Town (People In This Town" imagines a world where there is no concern for differences and peace is the way. As with much soul and funk message music of the time the Staples happily acknowledge the difference in people rather than insist everyone is the same and tries to bring to the forefront the idea that those qualities are what must bring us together as opposed to alienate. 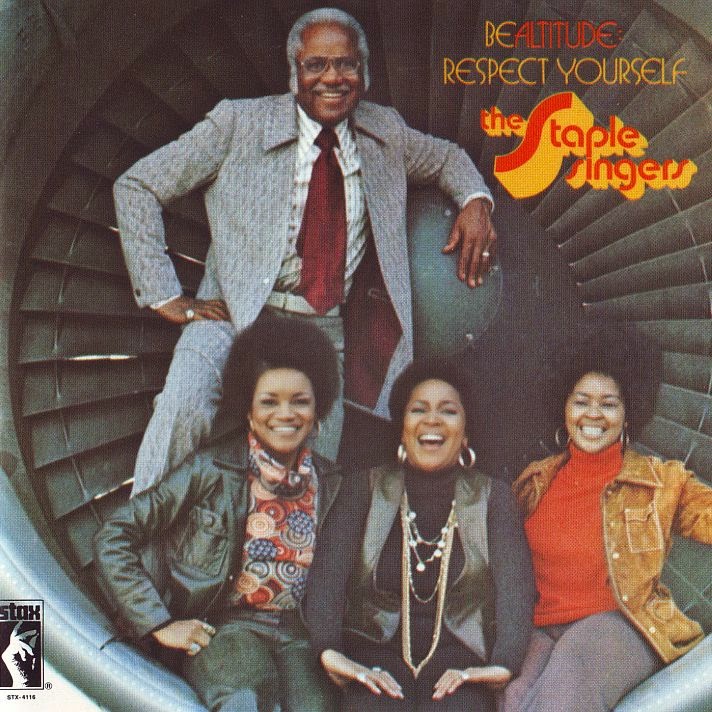 The Staple Singers - Be Altitude Respect Yourself  (flac 252mb)

thanks for the great stuff !

Yes left out the link but it's live now N'Joy

thank you very much :)

thanks from me too...

Rho - just tried to download Be Altitude. Could you re-up Please?

[Just returned from a Southern USA tour - Muscle Shoals Sound Studios, FAME, Sun, Stax and Nashville etc, so filling in the gaps.
For those that plan to visit MSSS etc., do it now whilst its still quaint and before it becomes 'rescued' by Dr Dre/Beats money. It was closed for a long time and now you can look around for a fee - we had the place to ourselves... magical].

All the Staples would be nice of course. Like many I'm sure, I'm familiar with their 45's, but not albums. thanks, jws

Dear Rho,
could you please re-up the Staple Singers, especially Be Altitude Respect Yourself?
Thanks for everything!

Thank you very much for the re-up!