Hello, still two nights before the Scots get split between the fearful selfish ones and the collective optimist ones and i'm afraid the ISIS policy of fear will win. Yes a no vote is a vote for IS now why didn't those campaign strategists see that one coming. It looks that many a no voter is afraid to come out for his/her cowardice, and some expect a nasty friday with serious riots if the yes vote is defeated...

Today's band is an American rock band from New York City underground during the post-punk era, they are remembered as one of the most under-appreciated indie-rock bands of the 1980's and to this day have many fans throughout the world. Although the band never sold many records, they are considered to be influential in the indie rock scene today.  ....N'Joy

Of the countless bands to emerge from the New York City underground during the post-punk era, few if any were as unique and influential as the Feelies; nerdy, nervous, and noisy, even decades later their droning, skittering avant-garde pop remains a key touchstone of the American indie music scene. Named in reference to Aldous Huxley's paranoid classic Brave New World, the Feelies formed in 1976 in suburban Haledon, NJ, where singers/guitarists Bill Million and Glenn Mercer first met while in high school; bassist John J. and drummer Dave Weckerman rounded out the original lineup, although they were replaced in 1977 by bassist Keith Clayton and drummer Vinny Denunzio. The revamped group soon made its N.Y.C. debut, quickly creating a buzz throughout the city's new wave circuit -- a Village Voice headline even dubbed them "The Best Underground Band in New York."

Drummer Anton Fier replaced Denunzio in 1978, and a year later the Feelies cut their debut single, "Fa Ce-La," for the British indie Rough Trade. Their refusal to work with outside producers jeopardized their immediate hopes for a major-label deal, however, and so their brilliant 1980 LP, Crazy Rhythms, instead appeared on another U.K. indie, Stiff; the record's manic melodies, jittery rhythms, and opaque lyrics made it a huge critical favorite, and although it made little impact outside of underground circles, many latter-day acts -- R.E.M. chief among them -- cited the album as a major influence. Still, Crazy Rhythms' commercial failure sat badly with Stiff, which began pressuring the Feelies to produce a hit single; the pressure ultimately forced the group into a kind of suspended animation, with Fier soon exiting to join the Lounge Lizards and later mounting the Golden Palominos.

With the Feelies out of action for the better part of the early '80s, the remaining members turned their focus to a variety of side projects -- in 1982, Million and Mercer reunited to compose the score to Susan Seidelman's film Smithereens, concurrently playing in a series of Jersey-area bands including Weckerman's new outfit Yung Wu, the Trypes (who issued the 1984 EP The Explorers Hold), and the instrumental Willies. Finally, Million and Mercer reactivated the Feelies banner in 1983, reuniting with Weckerman as well as two of their Willies bandmates, percussionist Stanley Demeski and bassist Brenda Sauter; still, the revitalized group's performance schedule was sporadic at best, limited primarily to holiday appearances. Finally, they entered the studio with producer Peter Buck of R.E.M., releasing the folky The Good Earth on Coyote in 1986.

That same year, the Feelies appeared in director Jonathan Demme's film hit Something Wild; combined with critical praise for The Good Earth, the group's raised media visibility caught the attention of A&M, which released the follow-up, Only Life, in 1988. Time for a Witness followed in 1991, but on July 5 of that year the Feelies gathered at the Maxwell's club in Hoboken, NJ to play their final show -- soon after Million unexpectedly moved to Florida without telling any of his bandmates, not even leaving a forwarding address. In the months to follow Demeski began playing in Luna, Sauter worked with Speed the Plough and Wild Carnation, and Mercer and Weckerman reteamed in Wake Ooloo; when that band fell apart in 1998 after three LPs for the Pravda label, the duo again joined forces to form another new unit, Sunburst.

In the summer of 2008 the classic 1983 lineup held a low-key reunion, opening for Sonic Youth and playing two sold-out shows at Maxwell's. A year later they appeared at a tribute to R.E.M. concert at Carnegie Hall and performed at the All Tomorrow's Parties festival in Monticello NY, playing the Crazy Rhythms album in its entirety. The band signed with Bar/None that same year, and began work on a new album. Recorded at Water Music in Hoboken, 2011's Here Before represented the outfit's first collection of new music in nearly 19 years.

But The Feelies needn't have worried -- one play confirms Here Before is excellent, an album that finds the band seemingly picking up where it left off and sounding as committed and invigorating as ever, reveling in the beauty and power of rhythm guitars and cracking percussion. Here Before features the complete Feelies Mk. 2 lineup that recorded The Good Earth, Only Life, and Time for a Witness -- guitarists Glenn Mercer and Bill Million, bassist Brenda Sauter, drummer Stanley Demeski, and percussionist Dave Weckerman -- and stylistically, it hits a middle ground between the gentler, more pastoral tone of The Good Earth and the more potent, electric feel of the two albums that followed.

The Feelies have reunited sporadically over the last two decades to play concerts at their early home at Maxwell's. The band most recently performed there for three consecutive nights on July 4-6, 2013.

Even the cover is a winner, with a washed-out look that screams new wave via horn-rimmed glasses, even more so than contemporaneous pictures of either Elvis Costello or the Embarrassment. But if it was all look and no brain, Crazy Rhythms would long ago have been dismissed as an early-'80s relic. That's exactly what this album is not, right from the soft, haunting hints of percussion that preface the suddenly energetic jump of the appropriately titled "The Boy With the Perpetual Nervousness." From there the band delivers seven more originals plus a striking cover of the Beatles' "Everybody's Got Something to Hide" that rips along even more quickly than the original. The guitar team of Mercer and Million smokes throughout, whether it's soft, rhythmic chiming with a mysterious, distanced air or blasting, angular solos. But Fier is the band's secret weapon, able to play straight-up beats but aiming at a rumbling, strange punch that updates Velvet Underground/Krautrock trance into giddier realms. Mercer's obvious Lou Reed vocal inflections make the VU roots even clearer, but even at this stage of the game there's something fresh about the work the quartet does, even 20 years on -- a good blend of past and present, rave-up and reflection. When the group's later label, A&M, finally got around to reissuing the album for the first time stateside, a curious bonus was included: a version of the Rolling Stones' "Paint It, Black," recorded by the later lineup of the band in 1990. Mercer's voice is noticeably different from his decade-old self, but it's an enthusiastic rendition not too far out of place. Here's the 09 remaster 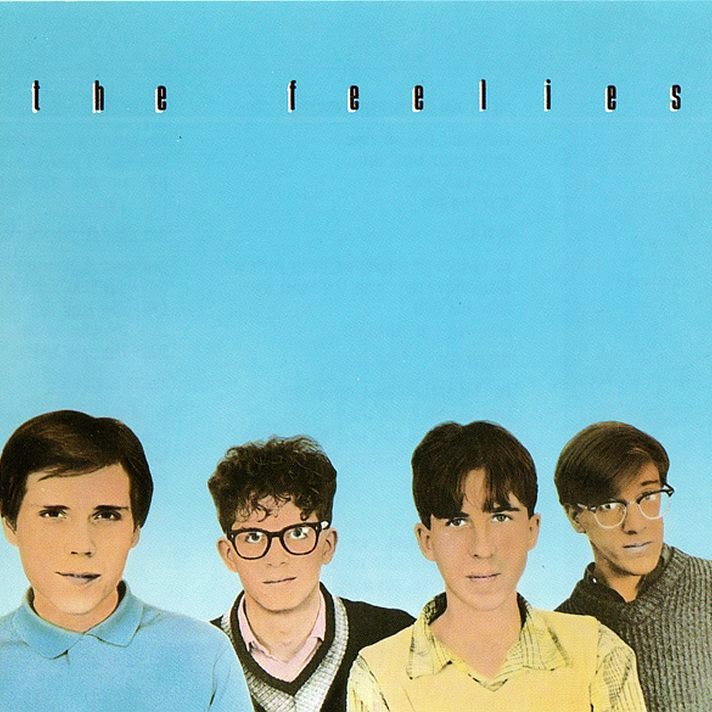 After the various side projects and explorations the band got up to for most of the early '80s, not to mention switching some members around (with bassist Sauter and drummer Demeski now forming the rhythm section), the Feelies made a fine return with The Good Earth. With co-production from noted fan Peter Buck, the group exchanged some of the understated tense frazzle of Crazy Rhythms for a gentler propulsion without losing its trancy edge. Compared to the wispy jangle rock that passed for much of college radio at the time, the Feelies proposed a different path with the songs' steady pace and murkier feeling. Demeski's a more than fine replacement for Fier (his martial playing on "Tomorrow Today" is one of his many entertaining touches), Sauter's playing emphasizes controlled understatement, and the Million/Mercer guitar duo still nails it. The brisker jauntiness of songs like "The Last Roundup," which wears just enough of a country & western edge without seeming like a parody or half-assed, varies the calmer moods elsewhere very well. At the album's considerable best, such as the brief but really lovely acoustic/electric blend of "When Company Comes" or the title track, with an almost epic ending, Million and Mercer sound like they inhabit the same body playing two guitars, everything's that much in lovely sync. Their vocals ride low in the mix this time out, but thankfully the sometimes all-too-obvious hints of Lou Reed in Mercer's style have been replaced with a more unique, stronger edge -- not that the connection still isn't there on a track like the building groove of "Slipping (Into Something)." Reed would also love its concluding guitar solo! 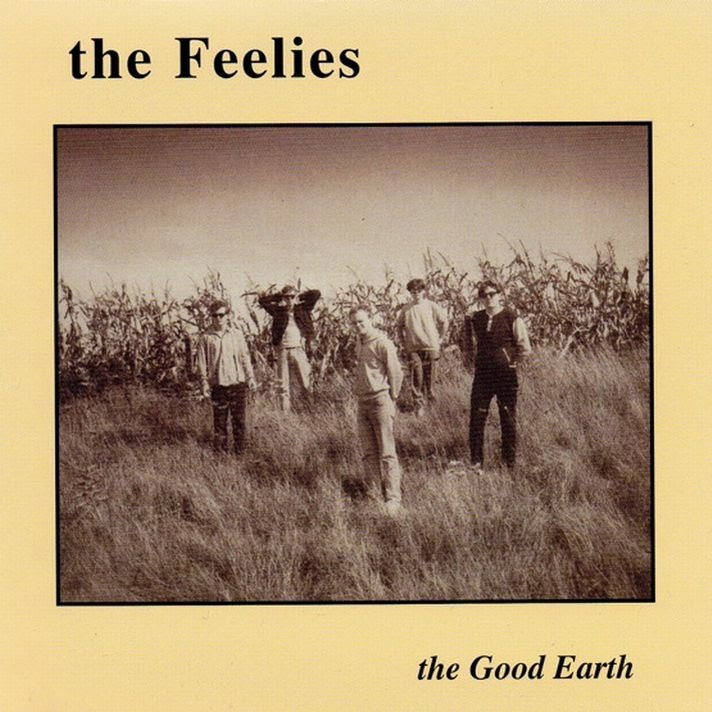 With an unchanged lineup but more attention due to their A&M deal, the Feelies hit the jackpot with their third album, a warm, inviting collection that finally addresses the endless Lou Reed comparisons with a cover of his "What Goes On." With its clearer feeling and peppier overall delivery, it avoids simply cloning the original arrangement and performance. The rest of the album shows off the band's distinctive yet flexible sound, as much jangle as it is quietly moody. Mercer and Million's previously tense guitar power becomes attractive shadings, implying a louder approach without always delivering it, while the Demeski/Sauter rhythm team takes the lead throughout; his steady drums and her low, rolling performances giving the guitarists something to play around instead of dominate. the Feelies always make this tranced-out rock their own, but this time around it's as quietly thrilling, if not more so, than ever. "Higher Ground" is a great example, with Mercer and Million trading off not merely notes and passages but differing approaches, whether laden with distortion or chiming clearly. Though Weckerman's work, as earlier, isn't easily distinguished from Demeski's, from the sound of it everything fit in right when recording. Where appears more audibly, as on the start of "The Undertow," his percussion adds an intriguing wild card to the proceedings, aiming at the same goal with slightly different sonics. Mercer's ghost-of-you-know-who vocals still pop up at times, but here his own ability to actually sing and hold notes comes forward, giving him a technical edge that he uses to great effect on the brisk "Away." 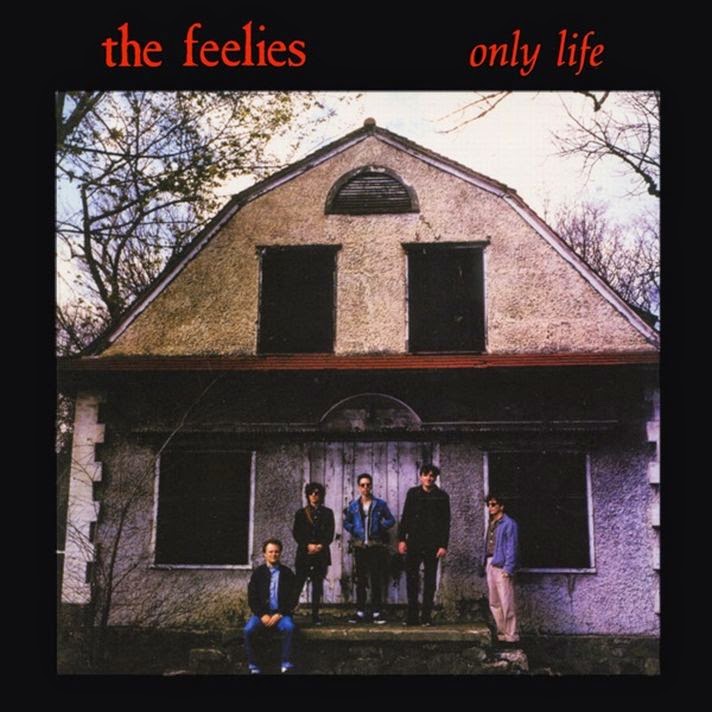 Please re-up! Thanks in advance.

This past summer, there was a Jonathan Demme festival at the Jacob Burns movie theater here in Pleasantville, NY. The Feelies performed a full concert after the showing of the film, playing songs from the first four albums, especially Crazy Rhythms and The Good Earth. They sounded fantastic!

Hello, apparently my Only Life zip had some issues so ive done a new re-up N'Joy

please reup the Only Life and the Good Earth albums from the Feelies. Thank you.