Hello, Occupy rallies all over, as the western world seems to finally have woken up to the insane games bankers are playing (can anyone explain why they seem to have to lend money to each other all the time ? Clearly they are going out of credit all the time) Worse is that politicians which one would assume keep tabs and impose limits aren't doing their job or can i say are more interested in a pay off as in campaign contributions) In Europe that is less the case but they are coerced by their own big banks and those from the States and nobody has the balls to call their bluff, we the people need to take back control from the banksters and hang at least 100 of them, throw their families out on the streets and confiscate the lot. That will teach them.

Time for a revolution ! The NY police maybe thick and corrupt but they too have been shafted and whilst thusfar goings on have been peaceful, it won't last and nasties will incite riots and panicking governments will come down hard, as they have no real argument for letting the people being ruined by a few hundred financial scam artists (off with their heads !) . These guys are the true terrorists of our day.

As i announced last week I got myself a new TV/monitor, installed it today and alas things didn't go smooth, the tv works though the ISP decoder box demands to be in between (channelhopping) but the biggest problem came when i reset the screen size, colors were fine on the original size but when i went up to 1920x1080 i got a blue tinge which i couldn't get rid off, resetting didn't help neither did going back to a restore point, meanwhile my tv image was fine, the blue is already there during start up which is odd and points to a motherboard issue, really not what i wanted, this is an old machine and i haven't planned buying a new one, alas google hasn't provided me with a solution thusfar. duh

There was some considerable interest in last weeks Klaus Schulze post so as announced today a followup, enjoy

As both a solo artist and as a member of groups including Tangerine Dream and Ash Ra Tempel, Klaus Schulze emerged among the founding fathers of contemporary electronic music, his epic, meditative soundscapes a key influence on the subsequent rise of the new age aesthetic. Continueing from last week...

Richard Wahnfried, then simply Wahnfried after 1993, is the long-time and only real alias for Klaus Schulze – originally a pseudonym, later an official side project name. Seven albums were released under this name between 1979 and 1997. Main characteristics of the Wahnfried albums (as opposed to Schulze's regular works) are, oriented towards more mainstream genres (some would say "more commercial"), such as rock, dance, techno and trance. Always allowing for collaborative and less electronic albums, with known or unknown guest musicians performing along Schulze's synths.

He remained extraordinarily prolific in the years to follow, with 1979's Dune, inspired by the Frank Herbert sci-fi classic, becoming his 11th solo record released during the 1970s alone. In the 1980s Schulze moved from analog to digital instruments, and his work accordingly became less experimental and more accessible. Although the switch to purely digital recording and instruments is evident in the style of Dig It (1980) It was not until the release of Trancefer (1981) that the shift in style became evident. Schulze's style transformed from gentle melodic journeys to an ever-growing crescendo of music consisting of multi-layered rhythmical passages.Schulze issued a steady stream of new work in addition to various productions released on his own IC label;

Starting with Beyond Recall, the first half of the 1990s was the notorious "sample" period, when Schulze used a wide variety of pre-recorded sounds such as screeching birds and sensuous female moans in his studio albums and live performances. , Schulze had immersed himself in contemporary dance music, occasionally working in conjunction with Pete Namlook (as Dark Side of the Moog). The first half of the 1990s also saw Schulze experiment with sampling, starting with the album Beyond Recall, but these forays largely ended in 1995 with the release of In Blue. Ten years later, he began re-releasing his earlier works and collaborating with Lisa Gerrard of Dead Can Dance. In April 2008, Schulze released Kontinuum; he also released Farscape, a joint project with Gerrard, in June of the same year.

Mirage is one of Klaus Schulze's best albums. It is certainly among the eeriest e-music sets ever. He created it as "an electronic winter landscape dedicated to Hans Dieter Schulze." It has somewhat of a symphonic structure. There are two main pieces: "Velvet Voyage" and "Crystal Lake." Each piece has six separate movements with experimental sounds serving as the recurring themes. The album has cold and icy textures that take listeners to the brink of the winter solstice. The experimental timbres give the set a sci-fi feel. This is vital space music. The bonustrack is a formerly unreleased long track that Klaus Schulze recorded six months prior to "Mirage". It's the complete version of a soundtrack piece that was originally used for a Dutch movie. 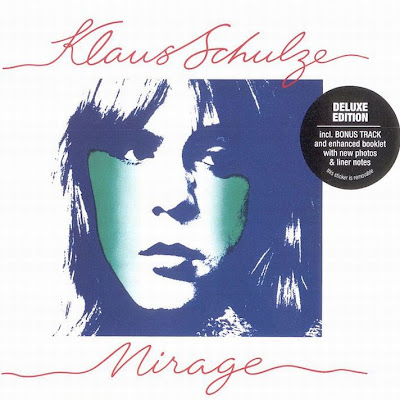 Each track on X or "Ten" (since it's Schulze's tenth release ) is titled after famous German personalities, but it's the provocative electronic music within the names that makes this one of his best albums. On this two-CD set, Schulze's sequencer is joined by electric guitar and drums, that pleasingly brings an earthy, simplistic feel into his pastiches. "Friedrich Nietzsche" is the most vibrant of all six, harboring a complex synthesized voyage with imaginative sculpturing using both the Moog and Mellotron. Extreme washes of sturdy tones and pulses make up this wonderfully crafted track, one of Schulze's best. In the same manner, the rest of the album is pure electronic bombardment. With 12 different types of sequencers and synthesizers molded, merged, and fused together, the musical landscape created is overwhelming. On both the 29-minute "Ludwig II Von Bayern" and the equally lengthy "Heinrich Von Kleist," an atmosphere is created through the multitude of variable electronics, both of the guitar and keyboard type. A true pioneer at his craft, Schulze's X is one of the more definitive albums of his career. 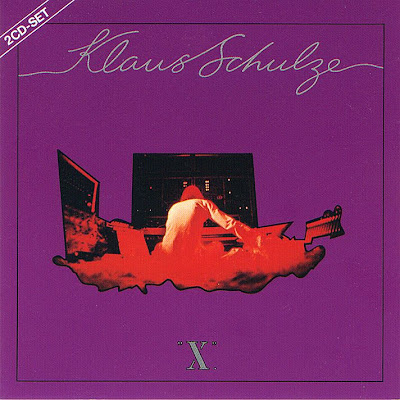 Klaus Schulze had acknowledged his admiration for Frank Herbert on X, so the decision to devote a new work to Herbert's brilliant novel, Dune, isn't unexpected. What is surprising is how good this piece is; from the opening amorphous forms and alien sounds to the stately synthesizer music that rises by midway, "Dune" is one of Schulze's finest moments. Perhaps it's the absence of percussion or the presence of Wolfgang Tiepold's cello that elevates the musical discussion, but for the first half of this record Schulze throws his hat in with the modern classical masters of the late 20th century and holds his own. "Shadows of Ignorance" reintroduces percussion and sequencer-driven structure, it contains a long poem written by Schulze, the bulk of Klaus' existential observations are delivered by a half-singing/half-chanting Arthur Brown in harmony with the electronic music and balanced nicely by the cello. The bonus track is derived from a track recorded live at L'Abbaye de l'Epeau outside Le Mans late 1979 during the "Dune" tour. 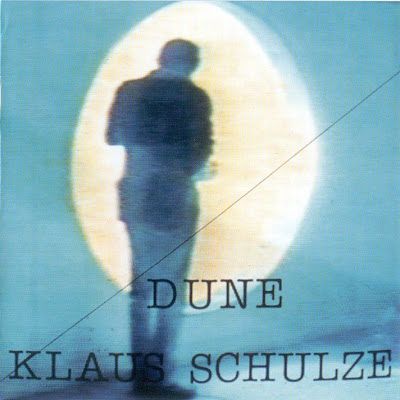 Hello Rho - following on from your re-up of Herr Schulze, could you spare a moment to re-share these please?

Any chance you reup the dead links? The only one that is still active is X-1 (not X-2).

Rho, this was one of my requests from last week. Can you reupload it?
Thanks.

X-1 appears to be dead. Any hope of reuploading it? Many thanks in advance.