Today's Artist is a longstanding leader in contemporary electronic music, composer and multi-instrumentalist,a onetime professional motorbike racer born 1955 in La Mesa, California,  drew on the beauty and power of the earth's landscapes to create lush, meditative soundscapes influential on the emergence of ambient and trance. Drawing from a vast, unique, deeply personal authenticity, his releases cover a wide range of dynamic styles all of which bear his signature voice. For 35 years the boundaries are constantly challenged in his work, ranging in style from pure floating spaces, analog sequencer music, primordial tribal, rhythmic ambient, dark ambient, long-form 'drift ambient,' and avant garde atonal ambient.....N'Joy

A longstanding leader in contemporary electronic music, composer and multi-instrumentalist Steve Roach drew on the beauty and power of the Earth's landscapes to create lush, meditative soundscapes influential on the emergence of ambient and trance. Born in California in 1955, Roach -- inspired by the music of Tangerine Dream, Klaus Schulze, and Vangelis -- taught himself to play synthesizer at the age of 20. Debuting in 1982 with the album Now, his early work was quite reminiscent of his inspirations, but with 1984's Structures from Silence, his music began taking enormous strides. The album's expansive and mysterious atmosphere was partly inspired by the natural beauty of the southwestern U.S. Subsequent works, including 1986's three-volume Quiet Music series honed Roach's approach, his dense, swirling textures and hypnotic rhythms akin to environmental sound sculptures.

In 1988, inspired by the Peter Weir film The Last Wave, Roach journeyed to the Australian outback, with field recordings of aboriginal life inspiring his acknowledged masterpiece, the double-album Dreamtime Return. A year later, he teamed with percussionist Michael Shrieve and guitarist David Torn for The Leaving Time, an experiment in ambient jazz. After relocating to the desert outskirts of Tucson, Arizona, Roach established his own recording studio, Timeroom. In the years to follow, he grew increasingly prolific, creating both as a solo artist and in tandem with acts including Robert Rich, Michael Stearns, Jorge Reyes, and Kevin Braheny -- in all, he recorded close to two-dozen major works in the '90s alone, all of them located at different points on the space-time continuum separating modern technology and primitive music.

His album roster from that decade includes Strata (1991), Artifacts (1994), Well of Souls (1995), Amplexus (1997), and Dust to Dust (1998). Early Man was released on Projekt in early 2001, followed by one of his many collaborations with Vidna Obmana, Innerzone. Throughout the remainder of the 2000s, Roach remained extremely prolific. His release schedule included the Projekt titles Trance Spirits (with Jeffrey Fayman) and the quadruple-disc Mystic Chords & Sacred Spaces, Spirit Dome and Somewhere Else (with Obmana), Fever Dreams, Mantram, and Nada Terma (with Byron Metcalf and Mark Seelig), and the ongoing Immersion series, Arc of Passion, and Stream of Thought (with Erik Wøllo). He also self-released several titles on his own through Timeroom Editions.

Over the next decade, Roach would show no signs of slowing as he continued with a non-stop slew of new material under his own name, as well as collaborations and soundtrack work. Though new volumes of work appeared at a clip of more than three albums per year, standouts included more collaborations with Byron Metcalf, 2013's Future Flows, 2014's disparate releases of arid road trip music on The Desert Collection and ambient explorations of mortality and humanity on The Delicate Forever. Roach began constructing an extensive analog modular synthesizer system in 2014, and in 2015, the album Skeleton Keys was composed entirely using this setup. In 2016, Roach released two full-lengths with Robert Logan (the more rhythmic Biosonic and the serene drone album Second Nature), as well as solo efforts This Place to Be and Shadow of Time.

In concert, Steve creates transcendent electronic music emerging from an elemental instinctual mode. These events bring together an audience from around the country and as far away as Europe, all looking to experience the on-the-edge experience that erupts in the live setting. This makes Steve's concerts an entirely different experience from the recorded medium. With months of preparation absorbed into his system, evocative soundscapes blend with ecstatic rhythmic sections born from hands-on analog sound creation and sonic shapeshifting. The result is a direct transference of creative energy from the artist through his instruments out to the listener. Live performances are the place where Steve's music thrives, created at the leading edge of now.

"Shimmering", "life-affirming" and "moving only forward" best describes this new release drawn from the pulsing side of the lifeblood found in Steve's work. Proof Positive was created over the past year, from '05 to '06. These all-new pieces, sequential with textural undercurrents, have a kind floating sensation; the sum total is purely hypnotic with a contained and sustained energy that is consistent through the entire CD. This one lights up the brain and excites the ears in a way that only a hands-on spontaneous approach to carving pure analog sound can offer. A touchstone release for Steve, this is a perfect set for long drives on the open road or for traveling the inner landscapes while cruising in your favorite listening chair. Proof Positive indeed! 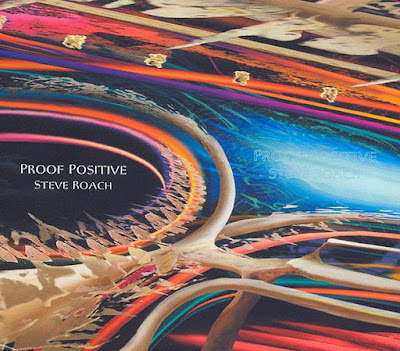 Steve Roach's Immersion: One is the first of a series of albums that are specially designed for the living space. On his website, Roach calls them "steady state zones created specifically as tone meditations." While he avoids the use of the term "ambient," in one sense, this is as pure as ambient music -- as theorized by Brian Eno in the 1970s -- can be. Designed to be played at low volume, the 74-minute duration of this piece contains literally no dynamics; it is strategized to participate in a steady state -- reading, sleeping, moving about doing chores -- where music is background atmosphere. Beginning on a single amorphous drone, the piece gently draws the listener down into its sound world, where what isn't here is pointed out by what is. And what is missing is the space for the listener to inhabit during these steady states. Slowly evolving electronic keyboard sounds, repetitive in nature, hover just above the drone. They invite you but without insisting. They provide a kind of cover for the listener as the drone itself, so unidentifiable in nature, would be -- perhaps too much without them. Listened to on headphones, "Immersion : One" is an entire universe of purposeful texture that feels like the electronic equivalent of a work by Morton Feldman: there is motion, there is duration, there is presence, and in-between spaces there is silence asserting itself, though it never quite comes to the fore. Also like Feldman's music, there is no tension. This music begins in the space where tension has already been resolved, has dissipated and disappeared, making gentle, non-invasive quiet possible. And in quiet is mystery, and this work is nothing if not mysterious. It has no origin but somewhere in the heart of silence and it really has no end until it finds silence once more. Roach has always been an investigator, a traveler of sonic worlds instead of physically present ones. Here he reveals a new one, unnamed except for its ability to make us one with it. 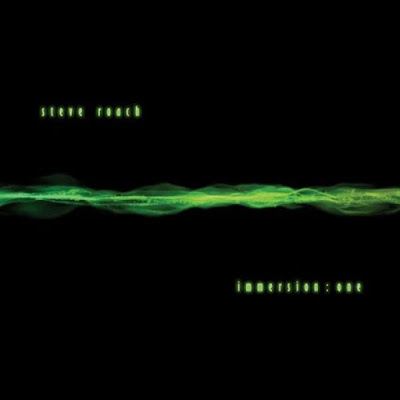 The second in an ongoing series of atmospheric zones by master sound painter Steve Roach, Immersion: Two presents a subtle shift from the luminous steady state harmonic current of Immersion: One. On this 73 minute, long-form soundscape, a sinuous weblike mist seems to emanate from the speakers. Mysterious yet calm and introspective, this is the perfect sound environment for the deeper hours after midnight, or anytime a quiet, engulfing audio landscape is desired. If Nag Champa or Sandalwood incense had a sound, this might be it.

"This continuous zone, titled 'Artifact Ghost', has to be one of my favorites for late-night activity and sleeping. For years I kept coming back to it, as it always feels alive and never-ending, never beginning. This piece was a big part of the inspiration to start the Immersion series. An 8-minute excerpt from the 90-minute original was heard on Texture Maps, and after this glimpse of the ghost I was struck by how many requests there were for a long-form version.

"Perceptive ears will hear shades of this ephemeral zone as far back as ARTIFACTS, where I wove it into the fabric under the tribal-based grooves. Its smoky presence paid a visit on Cavern Of Sirens as well. If you were at any of my concerts in the mid to late 90's, there's a good chance you heard this piece setting the space before my performance. On Immersion: Two I took the opportunity to live with this zone again, to fine-tune and melt the 'Artifact Ghost' even more, creating subtle movements and adding nearly subliminal openings along the way. I was shaping this Immersion: Twoversion right up 'til the last moment. It's playing in loop mode right now." 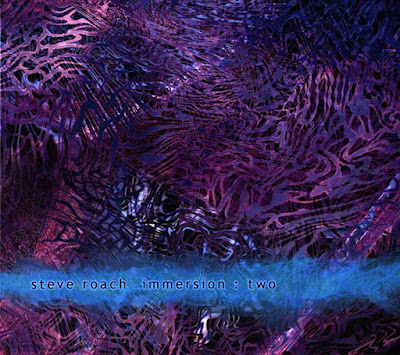 Three striking new pieces born from the moment. Steve Roach's new 2-CD set seamlessly fuses three long unfolding soundworlds into a vibrant sonic odyssey. The result can only be described as a living, breathing Arc Of Passion . As one of the pioneers of electronic music, Steve's career has many musical highpoints; Arc Of Passion  proves to be another definitive statement along the path. Advanced response from listeners places this album at the top of the list of must-have releases from Steve's body of work. Steve reaches into his sonic palette to weave elements drawn from his three definitive styles into a continuous, evolving flow. Rich harmonic chords, spiraling sequences and deep sky soundworlds move fluidly within this 2-hour set.

A vibrant immediacy is alive on Arc Of Passion ; recorded in a studio-like environment at Analogue Haven with an audience of 80 people, the sonic textures and evolving nature of the pieces reach into the core of the present moment bringing it into form with elegance and energy.

The opening 19-minute track billows outwards with rich and shadowed harmonic movement; deep chords ebb and flow like the thunder clouds of a summer storm, entering the realm of the hauntingly serene Mystic Chords & Sacred Spaces or The Magnificent Void albums. The set flows into the 60-minute title track built from layers of percussive and melodic patterns interwoven and evolving while holding a steady pulse and direction. Waves of emotion from intertwining sequencers provide the foundation for the evolving trance patterns that develop into full mesmerizing, passionate form. The closing 20-minute piece is deep primal ambience mixed with processed didgeridoo hovering within an expansive soundscape. Long, arching tendril-like forms breathe within this infinite soundfield.

Steve comments: "This arc represents a trajectory of emotion infused with energy from a radiant, serene core that comes from within the creative moment." Arc Of Passion is a deep and vibrant expression of life lived passionately. 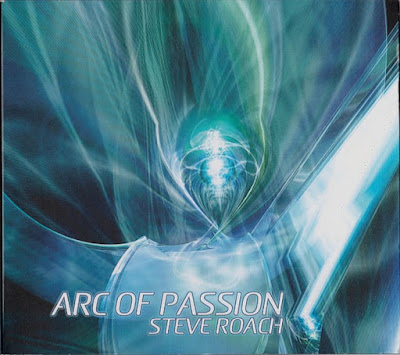 Thank you very much for these amazing uploads from the great Steve Roach. Keep it coming!