Today's artist is a seemingly ageless Cuban percussionist/bandleader who could energize packed behemoth arenas such as the Hollywood Bowl. A master conguero, who at his best creates an incantatory spell rooted in Cuban religious rituals, quietly seating himself before his congas and soloing with total command over the rhythmic spaces between the beats while his band pumps out an endless vamp. He has been hugely influential as a leader, running durable bands that combine the traditional charanga with jazz-oriented brass, wind, and piano solos, featuring such future notables as Chick Corea and Hubert Laws. He also reached out into R&B, rock, and electric jazz at times in his long career. .......N'Joy

Ramón "Mongo" Santamaría Rodríguez (April 7, 1917 – February 1, 2003) was a rumba quinto master and an Afro-Cuban Latin jazz percussionist. He is most famous for being the composer of the jazz standard "Afro Blue", recorded by John Coltrane among others. In 1950 he moved to New York City where he played with Perez Prado, Tito Puente, Cal Tjader, Fania All Stars, etc. He was an integral figure in the fusion of Afro-Cuban rhythms with R&B and soul, paving the way for the boogaloo era of the late 1960s. His 1963 hit rendition of Herbie Hancock's "Watermelon Man" (recorded on December 17, 1962) was inducted into the Grammy Hall of Fame in 1998.

Santamaría learned rumba as a kid in the streets of Havana's Jesús María barrio. He reminisced: "In the neighborhood where I came from we had all kinds of music, mostly from Africa. We did not leave it alone; we changed it our way. The music we made dealt with religion and conversation. The drum was our tool and we used it for everything" (1979: 19). Gerard points out: "Santamaría, like other drummers of his generation, learned music in the streets by observing different drummers. When he started playing professionally, he learned on the job. His approach was utilitarian, not theoretical" (2001: 29). Santamaría was mentored on bongos and rumba quinto by Clemente "Chicho" Piquero, who played in Beny Moré's band. He recalled: "I would go with Chicho and play the tumbadora and also the [quinto]. I would play everything because I learned a lot from Chicho—because he could play everything" (2001: 137).

When Santamaría soloed in jazz, you heard brilliant phrasing with roots firmly in the folkloric rumba, the authentic rumba of the street where he grew up. In addressing that authenticity, he once told Downbeat Magazine: "You can't learn to play things like guaguancó here.... You have to have been where it came from.... You can't listen to records and get those feelings" (1977: 48). Santamaría recorded some of the very first recorded folkloric rumbas. Because he recorded for mainstream jazz labels, his folkloric records were consistently available to the public. Santamaría's albums tended to list the personnel and their instruments; so record buyers came to know other Cuban rumberos, such as Armando Peraza, Francisco Aguabella, Julito Collazo, Carlos Vidal Bolado, Modeto Duran and Pablo Mozo. The 10 inch 33 1/3 rpm phonorecord Afro-Cuban Drums by Santamaría was recorded in SMC's New York City studios on November 3, 1952. Santamaría's next recordings with folkloric rumba were on Changó (re-issued as Drums and Chants) recorded in New York (1954). Yambú (1958), Mongo (1959), and Bembé (1960) followed.

Santamaría's quinto phrasing was dynamic and creative; he had an unmistakable sound, that was uniquely his own. He did not analyze his personal style: "When I play I don't know how I do it, or what I do ... I just play" (2001: 29).[5] The following example is an excerpt from a quinto performance by Santamaría on his composition "Mi guaguancó" (1959). The excerpt shows variations on two main motifs, marked as A and B. Santamaría's repetition of what is typically a secondary phrase (B), makes it the primary motif here.

Santamaría began playing bongos with Septeto Beloña in 1937. In the 1940s he worked in the house band of the prestigious Tropicana nightclub. When Chicho could not join a tour in Mexico in the late 1940s, he recommended Santamaría for the job. Mexico opened Santamaría up to the wider world beyond his island home. After returning from Mexico in 1950, Santamaría moved to New York City, where he became Tito Puente's conga player. In 1957 Mongo Santamaría joined Cal Tjader's Latin jazz combo.

In 1959 Santamaría recorded "Afro Blue," the first jazz standard built upon a typical African 3:2 cross-rhythm, or hemiola. The song begins with the bass repeatedly playing 6 cross-beats per each measure of 12/8, or 6 cross-beats per 4 main beats—6:4 (two cells of 3:2). The following example shows the original ostinato "Afro Blue" bass line. The slashed noteheads indicate the main beats (not bass notes), where you would normally tap your foot to "keep time."

In late 1962 Chick Corea had given notice and Santamaría needed a pianist to fill in for the upcoming weekend gigs. Herbie Hancock got the temporary job. Hancock recalls what happened the night that Santamaría discovered "Watermelon Man" the only tune of Santamaría's to reach the top of the pop charts:

The sudden success of the song (which Mongo Santamaria recorded on December 17, 1962) propelled Santamaría into his niche of blending Afro-Cuban and African American musics. Santamaría went on to record Cuban-flavored versions of popular R&B and Motown songs.

This album explores the wonderful world of African drums and chants (as the title obviously suggests) which would precede the creation of what is known today as salsa and many other genres. Aside from displaying Mongo Santamaria's uncanny skills on drums, it really gives a great feel and idea of what was done and is still done in Puerto Rico with bombas and plenas. As an important part Caribbean heritage, this album is a great display of how beautiful the flow of energy and inspiration can be improvised and doesn't necessarily have to be arranged. The chants and drumming are just bursting with energy that will have you wanting to trance along with the beat of drum. Anyone that's into any type drum will certainly agree that this music is like having heaven on Earth. Mongo really takes the cake with this one. 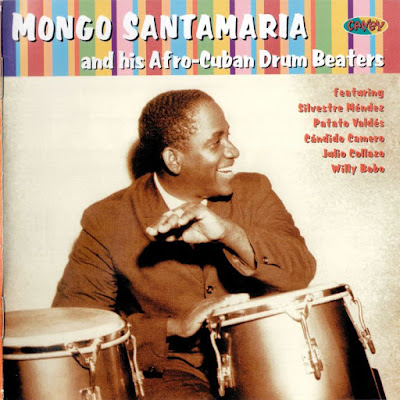 This single cd has all of the contents of the two Mongo Santamaria Riverside albums originally titled Mongo Explodes and Go, Mongo! The music was last available as a two-LP set also titled Skins. The 1964 session, oddly programmed first, finds Santamaria on conga and bongos at the head of a ten-piece band also including trumpeter Marty Sheller, then-unknown flutist Hubert Laws (also featured on piccolo and tenor), Bobby Capers on alto and baritone, and a seven-piece rhythm section with five percussionists. Cornetist Nat Adderley guests on three of the ten numbers, which are all group originals, including four songs from Sheller. The early dates (Mongo's first as the leader of a fairly jazz-oriented Latin group) have Santamaria leading a completely different band, a nonet with just three percussionists. Most notable among the personnel are the young Chick Corea on piano and Pat Patrick, on leave from Sun Ra's band, as one of the two saxophonists. This time around, Mongo contributed four of the nine fairly obscure numbers. Although some of the songs on the 1964 date were put together in hopes of duplicating the commercial success of "Watermelon Man" (none succeeded), the music still sounds fairly fresh and lively. An excellent introduction to Mongo Santamaria's viable brand of Afro-Cuban jazz. The next time the terribly untalented hippies in the park bang on their bongos, maybe they should be given this collection of songs by Mongo Santamaria, King of the Bongos and Havana Congas, so that in the future this rattling of reverence will be silenced. Because what mongo conjures conjures up an often with open mouth, while the hip continues to hops and circles.  Santamaria earned his first spurs in Havana, before he landed in Mexico City in 1950 in New York and celebrated some great successes a few years later.

Although his music is based on the Latin sound, predominantly Afro-Cuban and Afro-Brazilian rhythms, but he is known especially for its fusion with jazz, soul and funk, which also happened mutually. Santamaria thus had a musical appeal far beyond its original sphere of activity, which is also noticeable in this compilation with recordings from the years of the Salsa boom (which is also reflected clearly in Mongo Santamaria) 1973-1980.

As an up-tempo soul number triggers an exciting jazz percussion number exploring musical frontiers, the musician who died on February 1, 2004 in Miami with his percussion instruments is once in the foreground, the other time he enters as an equal part  the mostly purely instrumental songs. Most of these changes occur within the songs, in "Dr. Gasca" he rages alone for a full one and a half minutes and makes one dizzy with the visual visualization of what he heard, when suddenly swinging horns are used and everything is washed away. 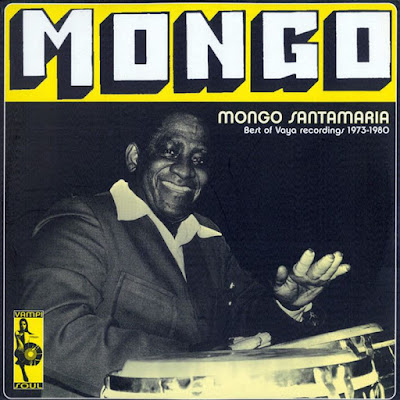 Loving this Vaya recordings comp. Thanks as always, Rho!