Today's artist is a three-time Grammy Award–winner known for his distinctive bass-baritone voice and romantic image, his greatest success came in the 1970s as a solo singer and with The Love Unlimited Orchestra, crafting many enduring soul, funk, and disco songs such as his two biggest hits, "You're the First, the Last, My Everything" and "Can't Get Enough of Your Love, Babe". During the course of his career in the music business, he achieved 106 gold albums worldwide, 41 of which also attained platinum status. He is one of the world's best-selling artists of all time. He was at home appearing on Soul Train, guesting with a full band on The Today Show, and appearing in cartoon form in various episodes of The Simpsons. . ..... N'joy

Born in Galveston, TX, Barry White grew up singing gospel songs with his mother and taught himself to play piano. Shortly after moving from Texas to South Central Los Angeles, White made his recording debut at the tender age of 11, playing piano on Jesse Belvin's "Goodnight My Love." He made his first record when he was 16 with a group called the Upfronts. The song was called "Little Girl" on a local L.A. label called Lummtone Records. Later he worked for various independent labels around Los Angeles, landing an A&R position with Bob Keane, the man responsible for the first pop recordings by Sam Cooke. One of his labels, Mustang, was hot at the time with a group called the Bobby Fuller Four in 1966. White was hired for 40 dollars a week to do A&R for Keane's family of labels: Del-Fi, Mustang and Bronco. During this time, White flirted with the idea of being a recording artist, making a record for Bronco called "All in the Run of a Day." But he chose to stick with his A&R duties. One of the first groups he worked with was the Versatiles who later changed their name to the 5th Dimension. White's first big hit came from an artist familiar to dancefloor denizens -- Viola Wills, whose "Lost Without the Love of My Guy" went Top 20 R&B. His salary went up to 60 dollars a week. White started working with the Bobby Fuller Four. Bob Keene and Larry Nunes -- who later became White's spiritual advisor and true friend -- wanted to cut a female act. White had heard about a singer named Felice Taylor. They had three hit records, "It May Be Winter Outside," "I'm Under the Influence of Love," and "I Feel Love Coming On." They were huge hits in England. White started making 400 dollars a week.

When Bronco went out of business, White began doing independent production. Those were some lean times for White. Veteran arranger Gene Page, who would later arrange or co-arrange White's hits, helped him out, giving him work and non-repayable loans. Then three years later, Paul Politti, who also worked at Bronco, contacted him to tell him that Larry Nunes was interested in starting a business with him. Nunes had started cutting tracks for a concept album he was working on. Meanwhile, White had started working with this girl group who hadn't done any singing professionally. They rehearsed for almost a year. White wrote "Walkin' in the Rain (With the One I Love)" with lyrics that were inspired by conversations with one of the singers, Glodean James (who would later become White's second wife). White christened the group Love Unlimited.

Larry Nunes took the record to Russ Regan, who was the head of the Uni label owned by MCA. Love Unlimited's From a Girl's Point of View became a million-seller. Soon after, Regan left Uni for 20th Century Records. Without Regan, White's relationship with Uni soured. With his relationship with Uni in chaos and Love Unlimited contract-bound with the label, White decided he needed to work with another act. He wanted to work with a male artist. He made three song demos of himself singing and playing the piano. Nunes heard them and insisted that he re-record and release them as a recording artist. They argued for days about it. Then he somehow convinced White to do it. White was still hesitating up to the time the label copy was made. He was going to use the name "White Heat," but the record became the first Barry White album. That first album was 1973's I've Got So Much to Give on 20th Century Records. It included the title track and "I'm Gonna Love You Just a Little More Baby."

White got a release from Uni for Love Unlimited and they joined him over at 20th Century Records. Then he had a brainstorm for another concept album. He told Regan he wanted to do an instrumental album. Regan thought he had lost it. White wanted to call it the Love Unlimited Orchestra. The single, "Love's Theme," went to number one pop, was a million-seller, and was a smash all over the world. The song earned him a BMI award for over three million covers.

For the next five years, from 1974 to 1979, there was no stopping the Barry White Hit Train -- his own Stone Gon, Barry White Sings Love Songs for the One You Love ("It's Ecstasy When You Lay Down Next to Me," "Playing Your Game Baby"), Let the Music Play (title track, "You See the Trouble with Me"), Just Another Way to Say I Love You ("I'll Do for You Anything You Want Me To," "Love Serenade"), The Man ("Your Sweetness Is My Weakness," "Sha La La Means I Love You," "September When We Met," a splendid cover of Billy Joel's "Just the Way You Are"), and Love Unlimited's In Heat ("I Belong to You," "Move Me No Mountain," "Share a Little Love in Your Heart," and "Love's Theme," with lyrics). He also scored a soundtrack for the 20th Century Fox film The Together Brothers, enjoying a resurgence on home video.

Then in 1992, White signed with A&M, releasing the albums The Man Is Back, The Right Night & Barry White, and Put Me in Your Mix (which contains a duet with Issac Hayes, "Dark and Lovely"). The Icon Is Love became his biggest-selling album since the '70s releases, going multi-platinum. It includes the platinum single "Practice What You Preach." The production lineup includes Gerald Levert and Tony Nicholas, his godson Chuckii Booker, Jimmy Jam and Terry Lewis, and White and his longtime friend Jack Perry. While some later efforts buried his vocals in whiz-bang electronic effects, on The Icon Is Love, White's deep steam engine baritone pipes are upfront in the mix. Staying Power followed in 1999, showcased in the best tradition of soul music where the focus is the singer and the song. The album earned White two Grammys. White's career took him from the ghetto to international success with 106 gold and 41 platinum albums, 20 gold and ten platinum singles, with worldwide sales in excess of 100 million.

White, who suffered from hypertension and chronic high blood pressure, was hospitalized for kidney failure in September of 2002. He was undergoing dialysis treatment, but the combination of illnesses proved too much and he died July 4, 2003 at a West Hollywood hospital. By the time of his death, Barry White had achieved a near-universal acclaim and popularity that few artists achieve and even fewer within their own lifetime.

This 1980 release came out half a decade after Barry White's hot run of bedroom soul hits and during a time when the silky, compact production style of disco had left its mark on much of modern R&B music. Sheet Music reveals the downside of the situation with a slew of well-below-the-grade numbers and feeble, redundant grooves. The title track starts things off in desperate fashion as White interjects anesthetized Earth, Wind, & Fire horn riffs over a perfunctory "Rock the Boat" beat. Influence works both ways, though, since Beck used the nasal vocal vamp from the end of this song to comedic effect on his Midnite Vultures cut "Hollywood Freaks." The disappointments continue on Sheet Music as White warms to "The Theme From Love Boat" on "Lady, Sweet Lady," turns the already repetitive "I Believe in Love" into an extended mix, and gives calypso a disco turn on "Rum and Coke." The latter cut does contain one of White's irresistible, sexual-advisory monologues, and infectious grooves do pop up sporadically, but these moments are rare, but Barry White remains a great soul artist. 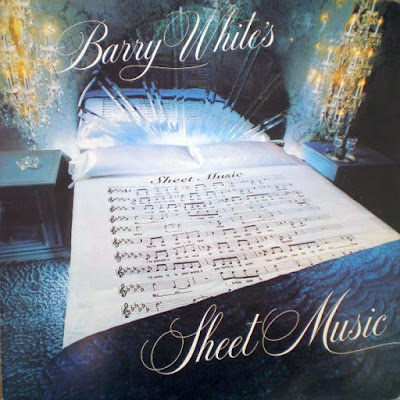 Barry and Glodean White combined for a delightful LP that got overlooked. After the dark, moody opening "Our Theme" the husband and wife team gets busy on the infectious "I Want You," and the Motown ish "You're The Only One For Me." On tracks 4, 5, and 6 they beg the pop/easy listening audience . . . maybe a bit too much, for fans of White's satiny brand of soul. They get back on track with "You," but fall back off with the disjointed "You Make My Life Easy Livin'." Simply lovely is "Didn't We Make It Happen," a Barry White, Danny Pearson composition and one of the album's four strongest tunes. It begins with White's traditional rap, and fans into a beautiful mid-tempo floater. The slow, erotic "Baby," concludes a fine effort. 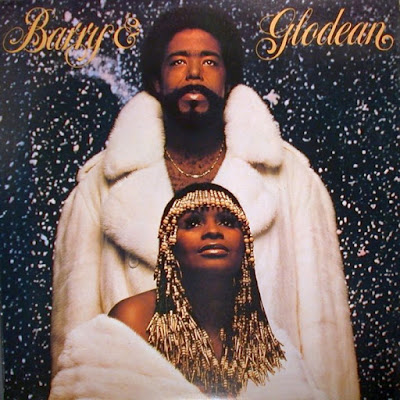 The interesting thing about this album is instead of being full of love songs like most of his albums, it's more of a social conscience record. At the time his albums were selling less and less, so he tried something different and it actually works quite well. He took a break after this record and later went back to his more typical love songs approach. Perhaps the most atypical album he did. 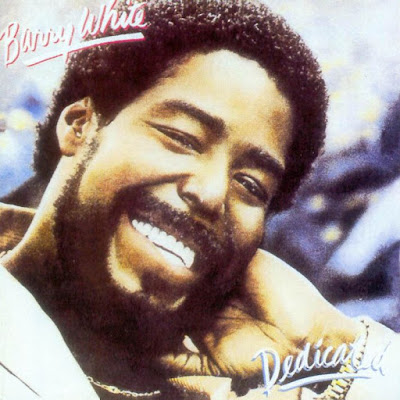 In 1983 Barry White and the Love Unlimited Orchestra released their final recording 'Rise'. As stated in an earlier review this album is very much a radical departure from earlier albums that showcased more lush "orchestrated" arrangements. The kind of music that is featured on 'Rise' is a unique and quirky mixture of then-contemporary electro funk (with stripped down new wave overtones) and latin jazz-pop-the first aspect of which actually sounds very very close to the recent music produced by Outkast and Gnarls Barkly. The two opening cuts "Take A Good Look" and "My Laboratory (Is Ready For You)"-the most famous song here are the primary examples of the "new sound"-same goes for the playful "Do It To The Music...Please"-all three feature heavy percussion and blippy keyboards popping in almost as puncuation.The "old" Barry White,with the deep voiced cooing appeal appears (briefly) on "After Five";that and "Anna Lisa" showcase a more ballad sound."In Brazil" is a very rousing 80's Brazillian R&B/funk free-for-all,not that far removed from George Duke and Deodato's forways into the genre."Goodbye Concerto" is another cut more representaive of the LUO's classic sound except the live drumming is replaced with polyrhythmic "syndrums";the overall feel is kind of like electro computer Love Unlimited orchestration. Taken with the times this album probably puzzled most people, especially fans of classic Barry White. But taken with todays music this album this is actually pretty innovative in terms of what is contemporary now. Something tells me...one day (maybe not now) this album will take on the mystique of something like Shuggie Otis's Inspiration Information and be reissued by someone in the context of it's connection to modern music. However it happens this is a big surprise people should know more about. 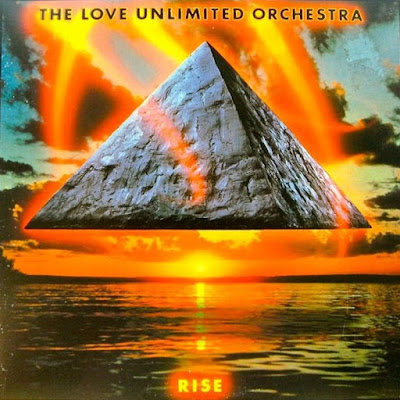