Today's artists are a folk rock band formed in 1983 by Mike Scott. The band's membership, past and present, has been composed mainly of musicians from Scotland, Ireland and England, with Edinburgh, London, Dublin, Spiddal, New York and Findhorn serving as homes for the group. They have explored a number of different styles, but their music is mainly a mix of Celtic folk music with rock and roll. They dissolved in 1993 when Scott departed to pursue a solo career. They reformed in 2000, and continue to release albums and tour worldwide...  ......N'Joy

Led by the literate singer/songwriter Mike Scott, the group's sole constant member, the mercurial Waterboys formed in London in 1981. Born December 14, 1958, in Edinburgh, Scotland, Scott first became involved in music as the creator of the fanzine Jungleland and later played in a series of local punk outfits. After college, where he studied English and philosophy, Scott and his band, Another Pretty Face, moved to London; following the group's breakup, he formed the Waterboys, so named after a line in the Lou Reed song "The Kids" but wholly appropriate given Scott's recurring lyrical fascination with sea imagery.

A newspaper advertisement calling for musicians led to a response from multi-instrumentalist Anthony Thistlethwaite; along with drummer Kevin Wilkinson, the Waterboys issued their self-titled debut in 1983. Keyboardist Karl Wallinger and trumpeter Roddy Lorimer joined for the 1984 follow-up, A Pagan Place, which expanded the group's rich, dramatic sound while further exploring Scott's interest in spirituality. With 1985's This Is the Sea, the Waterboys reached an early peak; a majestic, ambitious record, it earned the group a significant hit with the single "The Whole of the Moon."

However, after the album's release, Wallinger departed to form World Party, which prompted Scott and Thistlethwaite to relocate to Ireland and begin with a clean slate. When the Waterboys returned in 1988 with the acclaimed Fisherman's Blues, they were joined by traditional Irish players like fiddler Steve Wickham, drummer Dave Ruffy, keyboardist Guy Chambers, and bassist Marco Weissman, resulting in a stripped-down, folky sound that was continued on 1990's Room to Roam.

In 1991, Scott moved to New York without Thistlethwaite or any other bandmembers; the release of 1993's Dream Harder, cut with session musicians, marked a return to an electric, more rock-oriented sound. Soon Scott moved back to Scotland, where he began a lengthy stay at a spiritual commune; there he recorded the folk-tinged Bring 'Em All In under his own name, apparently putting the Waterboys to rest for good. On July 17, 1999, drummer Kevin Wilkinson committed suicide in his countryside home in Swindon, Wiltshire, England, just prior to jetting off on an American tour with Howard Jones. Wilkinson, who had also worked with Squeeze, China Crisis, Bonnie Raitt, and the Proclaimers, was a member of the Waterboys since their 1983 self-titled effort.

A Rock in the Weary Land Good fortune was in the wings, for Mike Scott resurrected the Waterboys name in 2000. Rock in the Weary Land marked the band's first release in seven years. Thistlethwaite and Wickham would return to the group, and tours across the world would prove successful. Fisherman's Blues, Pt. 2, an album featuring previously unavailable material from the Fisherman's Blues sessions, appeared in summer 2002. Scott returned to the studio for 2003's Universal Hall, followed by Book of Lightning in 2007.

In a Special Place (The Piano Demos for This Is The Sea) After a couple of years of touring and time off, Scott assembled and released a compilation of unreleased songs from the Waterboys This Is the Sea sessions entitled In a Special Place in 2011, and also published a book entitled, Kiss the Wind: A Waterboy's Adventures in Music. He and bassist Scott Arciero also assembled a new version of the Waterboys -- Wickham (fiddle), Katie Kim (vocals), James Hallawell (keyboards), Kate St John (sax, oboe), Blaise Margail (trombone), Ralph Salmins (drums), Sarah Allen (flute), and Joe Chester (guitar) -- who began performing together in late 2010 and early 2011. In March they entered a studio to commence recording a new album. An Appointment with Mr. Yeats, a collection of new songs whose lyrics were taken from the poems of William Butler Yeats. The sessions were completed in June. The album was released in Europe in the early fall on Proper, and in the United States in early 2012. In January of 2015, the Waterboys released Modern Blues. The album was recorded in Nashville, produced by Scott and mixed by Bob Clearmountain.

On their second album, A Pagan Place, the Waterboys turn Celtic folk-rock into a monumental fusion of Van Morrison's poetry, arena rock, and Phil Spector's monolithic wall of sound. It was the first Waterboys record with Karl Wallinger as part of the band and also includes Roddy Lorimer's first trumpet solo for the band on the track "A Pagan Place". The album shares a title with the book A Pagan Place, written by Irish novelist Edna O'Brien. According to a post at the official Waterboys forum, Mike Scott, who chose the album name, has never read the book, and neither the album nor the title track share any other similarities with the novel..A Pagan Place expanded The Waterboys' treatment of spiritual themes beyond the Christian beliefs of "December" from The Waterboys. "A Church Not Made With Hands" is an ode to a woman who "is everywhere and no place / Her church not made with hands".Both "All the Things She Gave Me" and "The Thrill is Gone" discuss the end of a romantic relationship. "Rags" and "Somebody Might Wave Back" discuss despair and optimism in loneliness. Scott's songwriting has been criticized as being overly introspective, and all four tracks contain some element of self-reflection. "The Big Music" was released as a single, and became a descriptor of the sound of the album. A Pagan Place was reissued in 2002 by Chrysalis Records, having been remastered. The reissue included both new tracks from the recording sessions for both A Pagan Place and from The Waterboys, along with extended versions of tracks from the original release. 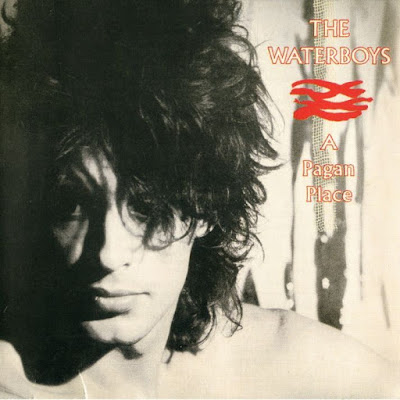 This Is the Sea, released in September 1985, is the third The Waterboys album, and the last of their "Big Music" albums. Considered by critics to be the finest album of their early rock-oriented sound, described as "epic" and "a defining moment", it was the first Waterboys album to enter the United Kingdom charts, peaking at number 37. Themes of the album include spirituality ("Spirit", "The Pan Within"), romantic love ("Trumpets"), and English politics ("Old England"), while the album's eponymous single ("This Is The Sea") utilizes the allusion of the flowing river as a life affirming recognition of constant renewal and regeneration. Steve Wickham makes his Waterboys recording debut playing violin on 'The Pan Within' and subsequently joined the band, appearing on the video of "The Whole of the Moon". This Is the Sea is the last album with contributions from Karl Wallinger, who left the group to form his own band, World Party. Mike Scott, the album's principal songwriter and leader of The Waterboys, describes This Is the Sea as "the record on which I achieved all my youthful musical ambitions", "the final, fully realised expression of the early Waterboys sound".  A remastered and expanded version was released in 2004, with a second CD of material from the album's singles, and unreleased tracks from the This Is the Sea recording sessions.The album cover is a photograph taken by Lynn Goldsmith. 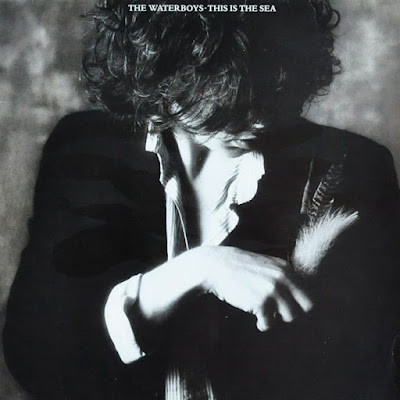 The Waterboys - This Is the Sea Additional Recordings (flac  409mb)

Mike Scott had been pursuing his grandiose "big music" since he founded the Waterboys, so it came as a shock when he scaled back the group's sound for the Irish and English folk of Fisherman's Blues. Although the arena-rock influences have been toned down, Scott's vision is no less sweeping or romantic, making even the simplest songs on Fisherman's Blues feel like epics. Nevertheless, the album is the Waterboys' warmest and most rewarding record, boasting a handful of fine songs ("And a Bang on the Ear," the ominous "We Will Not Be Lovers," "Has Anybody Here Seen Hank?," and the title track), as well as a surprisingly successful cover of Van Morrison's breathtaking "Sweet Thing." Fisherman's Blues was reissued in 2006 with a bonus disc containing fourteen outtakes, alternate versions and late-night studio jams. The re-mastered original included extended versions of "And a Bang on the Ear" and "World Party." 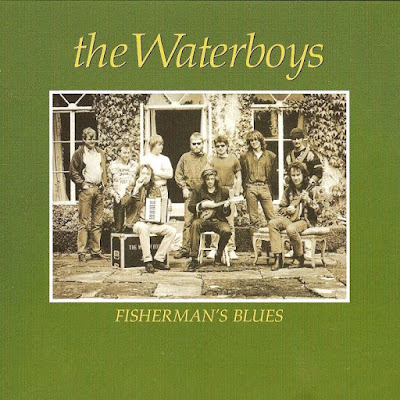 Please Exy, re-up the Waterboys, thanks a lot!

Could you reupload FISHERMAN'S BLUES?