Hello, today the 217th post of GoldyRhox, classic pop rock in the darklight are a British-American rock band formed in July 1967, in London. The band have sold more than 100 million records worldwide, making them one of the best-selling bands of all time. In 1998, selected members of the band were inducted into the Rock and Roll Hall of Fame, and received the Brit Award for Outstanding Contribution to Music.

The two most successful periods for the band were during the late 1960s British blues boom, when they were led by guitarist Peter Green and achieved a UK number one with "Albatross"; and from 1975 to 1987, as a more pop-oriented act, featuring Christine McVie, Lindsey Buckingham and Stevie Nicks. Their second album after the incorporation of Buckingham and Nicks, 1977's Rumours, produced four U.S. Top 10 singles and remained at No.1 on the American albums chart for 31 weeks, as well as reaching the top spot in various countries around the world. To date the album has sold over 40 million copies worldwide, making it the sixth-highest-selling album of all time.

Following that up became a mighty task first undertaken with the release of today's mystery album the album after that didn't set the bank account of their label on fire either so by the mid eighties all were doing their solo thing and founder Mick Fleetwood filed for bankruptcy yes selling millions of records and going broke such a pirate industry. By 87 they got together again to release their final album with Buckingham and Nicks Tango in the Night, a decent goodbye. The band soldiered on without much success By 97 they released The dance a live album it relaunched them into the spotlights. A successful arena tour followed the MTV premiere of The Dance, which kept the reunited Mac on the road throughout much of 1997 however it was to be the final foray of the classic line-up with Christine McVie for 16 years. Meanwhile 2014 she's back again touring the world for their global fanbase who just can't stop and refuse to go their own way....... 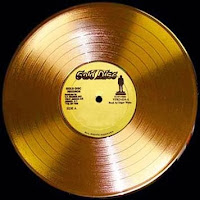 Today's mystery album was the 12th album by our mystery band released October 12, 1979, it is considered experimental, primarily due to Lindsey Buckingham's sparser songwriting arrangements and the influence of punk rock and new wave on his production techniques. Mick Fleetwood later proclaimed that it is his favourite and their best studio album. Costing over $1 million dollars to record (a fact widely noted in the 1979 press), it was the most expensive rock album made up to that point.

Today's mystery album peaked at No. 4 in the U.S., spent over five months within the top 40, and was certified double platinum for shipping two million copies. It peaked at No. 1 in the UK and achieved a Platinum award for shipments in excess of 300,000 copies. Though the album sold 4 million copies worldwide, and earned a Grammy nomination in 1981, to its art designers in the category "Best Album Package", in comparison to the huge sales of their previous album and the unprecedented recording expense, the band's record label deemed the project a failure, laying the blame squarely with Buckingham. Fleetwood, however, blames the album's relative failure on the RKO radio chain playing the album in its entirety prior to release, thus allowing mass home recording. In addition, today's mystery album was a double album, with a high list price of $15.98 ($2.00 more than other double albums).

The band embarked on a massive 18-month tour to promote Tusk. They travelled extensively across the world, including the U.S., Australia, New Zealand, Japan, France, Belgium, Germany, the Netherlands, and UK. In Germany they shared the bill with reggae superstar Bob Marley. It was on this world tour that the band recorded music for the band's Live album, which was released in 1980. In 2013, NME ranked today's mystery album  at number 445 in their list of The 500 Greatest Albums of All Time.  A 2-disc remastered version of the album was released in 2004, featuring the entire, unedited version of the original album on the first disc and various demos, outtakes and alternate versions on the second disc: The first disc is on offer here ...N'Joy