Hello, well silly islam terrorists have created headlines once again with their barbaric attack on unarmed humans, how heroic. I doubt very much the demon they wordship will reward them with 72 virgins, a couple of old hags more likely...

Stax wasn't just a soul label they released plenty of quality Rhythm and Blues too, infact one of the biggest blues guitarists that walked this earth was under contract to them...
Today an American blues guitarist and singer, and a major influence in the world of blues guitar playing. King was posthumously inducted into the Rock and Roll Hall of Fame in May 2013. King stood 6 ft 4 in (1.93 m), some reports say 6 ft 7 in (2.01 m) and weighed 250 pounds (110 kg) and was known as "The Velvet Bulldozer". Albert King is truly a "King of the Blues," although he doesn't hold that title (B.B. does). Along with B.B. and Freddie King, Albert King is one of the major influences on blues and rock guitar players. Without him, modern guitar music would not sound as it does -- his style has influenced both black and white blues players from Otis Rush and Robert Cray to Eric Clapton and Stevie Ray Vaughan. It's important to note that while almost all modern blues guitarists seldom play for long without falling into a B.B. King guitar cliché, Albert King never does -- he's had his own style and unique tone from the beginning. ..N'joy

Albert King plays guitar left-handed, without re-stringing the guitar from the right-handed setup; this "upside-down" playing accounts for his difference in tone, since he pulls down on the same strings that most players push up on when bending the blues notes. King's massive tone and totally unique way of squeezing bends out of a guitar string has had a major impact. Many young white guitarists -- especially rock & rollers -- have been influenced by King's playing, and many players who emulate his style may never have heard of Albert King, let alone heard his music. His style is immediately distinguishable from all other blues guitarists, and he's one of the most important blues guitarists to ever pick up the electric guitar.

Born in Indianola, MS, but raised in Forrest City, AR, Albert King (born Albert Nelson) taught himself how to play guitar when he was a child, building his own instrument out of a cigar box. At first, he played with gospel groups -- most notably the Harmony Kings -- but after hearing Blind Lemon Jefferson, Lonnie Johnson, and several other blues musicians, he solely played the blues. In 1950, he met MC Reeder, who owned the T-99 nightclub in Osceola, AR. King moved to Osceola shortly afterward, joining the T-99's house band, the In the Groove Boys. The band played several local Arkansas gigs besides the T-99, including several shows for a local radio station.

After enjoying success in the Arkansas area, King moved to Gary, IN, in 1953, where he joined a band that also featured Jimmy Reed and John Brim. Both Reed and Brim were guitarists, which forced King to play drums in the group. At this time, he adopted the name Albert King, which he assumed after B.B. King's "Three O'Clock Blues" became a huge hit. Albert met Willie Dixon shortly after moving to Gary, and the bassist/songwriter helped the guitarist set up an audition at Parrot Records. King passed the audition and cut his first session late in 1953. Five songs were recorded during the session and only one single, "Be on Your Merry Way" / "Bad Luck Blues," was released; the other tracks appeared on various compilations over the next four decades. Although it sold respectably, the single didn't gather enough attention to earn him another session with Parrot. In early 1954, King returned to Osceola and re-joined theIn the Groove Boys; he stayed in Arkansas for the next two years.

In 1956, Albert moved to St. Louis, where he initially sat in with local bands. By the fall of 1956, King was headlining several clubs in the area. King continued to play the St. Louis circuit, honing his style. During these years, he began playing his signature Gibson Flying V, which he named Lucy. By 1958, Albert was quite popular in St. Louis, which led to a contract with the fledgling Bobbin Records in the summer of 1959. On his first Bobbin recordings, King recorded with a pianist and a small horn section, which made the music sound closer to jump blues than Delta or Chicago blues. Nevertheless, his guitar was taking a center stage and it was clear that he had developed a unique, forceful sound. King's records for Bobbin sold well in the St. Louis area, enough so that King Records leased the "Don't Throw Your Love on Me So Strong" single from the smaller label. When the single was released nationally late in 1961, it became a hit, reaching number 14 on the R&B charts. King Records continued to lease more material from Bobbin -- including a full album, Big Blues, which was released in 1963 -- but nothing else approached the initial success of "Don't Throw Your Love on Me So Strong." Bobbin also leased material to Chess, which appeared in the late '60s.

Albert King left Bobbin in late 1962 and recorded one session for King Records in the spring of 1963, which were much more pop-oriented than his previous work; the singles issued from the session failed to sell. Within a year, he cut four songs for the local St. Louis independent label Coun-Tree, which was run by a jazz singer named Leo Gooden. Though these singles didn't appear in many cities -- St. Louis, Chicago, and Kansas City were the only three to register sales -- they foreshadowed his coming work with Stax Records. Furthermore, they were very popular within St. Louis, so much so that Gooden resented King's success and pushed him off the label.

Following his stint at Coun-Tree, Albert King signed with Stax Records in 1966. Albert's records for Stax would bring him stardom, both within blues and rock circles. All of his '60s Stax sides were recorded with the label's house band, Booker T. & the MG's, which gave his blues a sleek, soulful sound. That soul underpinning gave King crossover appeal, as evidenced by his R&B chart hits -- "Laundromat Blues" (1966) and "Cross Cut Saw" (1967) both went Top 40, while "Born Under a Bad Sign" (1967) charted in the Top 50. Furthermore, King's style was appropriated by several rock & roll players, most notably Jimi Hendrix and Eric Clapton, who copied Albert's "Personal Manager" guitar solo on the Cream song, "Strange Brew." Albert King's first album for Stax, 1967's Born Under a Bad Sign, was a collection of his singles for the label and became one of the most popular and influential blues albums of the late '60s. Beginning in 1968, Albert King was playing not only to blues audiences, but also to crowds of young rock & rollers. He frequently played at the Fillmore West in San Francisco and he even recorded an album, Live Wire/Blues Power, at the hall in the summer of 1968.

Early in 1969, King recorded Years Gone By, his first true studio album. Later that year, he recorded a tribute album to Elvis Presley (Blues for Elvis: Albert King Does the King's Things) and a jam session with Steve Cropper and Pops Staples (Jammed Together), in addition to performing a concert with the St. Louis Symphony Orchestra. For the next few years, Albert toured America and Europe, returning to the studio in 1971, to record the Lovejoy album. In 1972, he recorded I'll Play the Blues for You, which featured accompaniment from the Bar-Kays, the Memphis Horns, and the Movement. The album was rooted in the blues, but featured distinctively modern soul and funk overtones.

By the mid-'70s, Stax was suffering major financial problems, so King left the label for Utopia, a small subsidiary of RCA Records. Albert released two albums on Utopia, which featured some concessions to the constraints of commercial soul productions. Although he had a few hits at Utopia, his time there was essentially a transitional period, where he discovered that it was better to follow a straight blues direction and abandon contemporary soul crossovers. King's subtle shift in style was evident on his first albums for Tomato Records, the label he signed with in 1978. Albert stayed at Tomato for several years, switching to Fantasy in 1983, releasing two albums for the label.

In the mid-'80s, Albert King announced his retirement, but it was short-lived -- Albert continued to regularly play concerts and festivals throughout America and Europe for the rest of the decade. King continued to perform until his sudden death in 1992, when he suffered a fatal heart attack on December 21. The loss to the blues was a major one -- although many guitarists have tried, no one can replace King's distinctive, trailblazing style. Albert King is a tough act to follow.

Born Under a Bad Sign was the first album by Albert King for Stax Records and his second album overall. It is composed of singles released by King recorded between March 3, 1966 and June 9, 1967, with additional studio tracks. Providing accompaniment to Albert King, who sang and played lead guitar, were the Stax in-house recording session band, Booker T. and the MGs, featuring The Memphis Horns. The release of Born Under a Bad Sign in 1967 "would change the face of American music, modernizing the blues".[6] "'It was the great divide of modern blues, the point at which the music was rescued from slipping into derivative obscurity'". Part of the album's success has been attributed to Booker T. and the MGs who "gave his blues a sleek, soulful sound [which] gave King crossover appeal". Four of the album's songs became modern blues classics: "Born Under a Bad Sign", "Oh Pretty Woman", "The Hunter", and "Crosscut Saw" (although an older song, it was given a new treatment by King). Together with "Personal Manager" and "Laundromat Blues", they "form the very foundation of Albert King's musical identity and legacy"

Albert King's guitar work on the album "directly influenced legions of guitar players who studied its every subtlety and nuance" and was "profoundly influential, not just in blues, but in rock & roll". Jimi Hendrix, Eric Clapton, and Stevie Ray Vaughan have acknowledged King's influence; indeed, some of their guitar solos are close approximations to those found on Born Under a Bad Sign. In 1985, Born Under a Bad Sign was inducted into the Blues Foundation Hall of Fame in the "Classics of Blues Recordings" category.[9] It received a Grammy Hall of Fame Award in 1999 and in 2003, the album was ranked number 499 on Rolling Stone magazine's list of the "500 Greatest Albums of All Time" 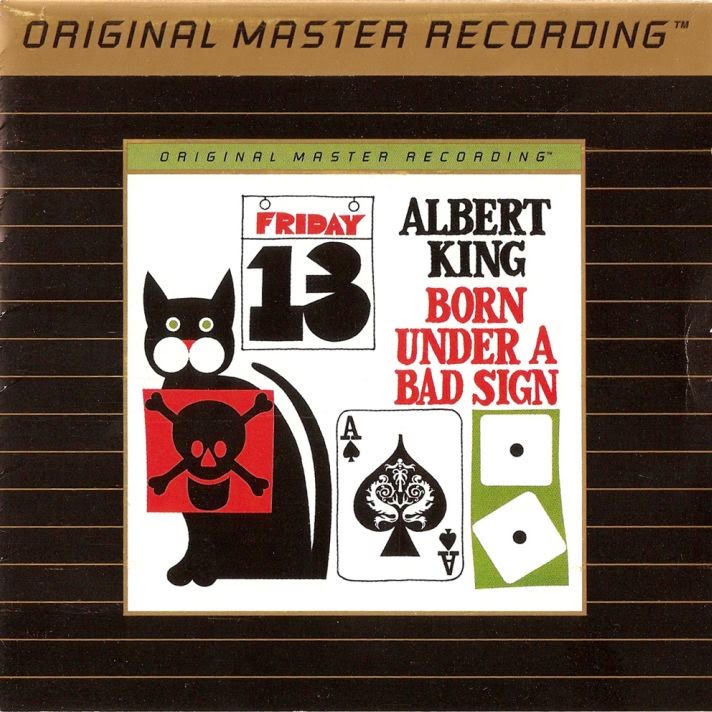 Live Wire/Blues Power is a Blues album by Albert King, it was Albert King's first live album and one of his definitive albums. Recorded live at the Fillmore Auditorium in 1968, the guitarist is at the top of his form throughout the record -- his solos are intense and piercing. The band is fine, but ultimately it's King's show -- he makes Herbie Hancock's "Watermelon Man" dirty and funky and wrings out all the emotion from "Blues at Sunrise." Leftovers from these live recordings were released later in 1990 in the albums Wednesday Night in San Francisco and Thursday Night in San Francisco. 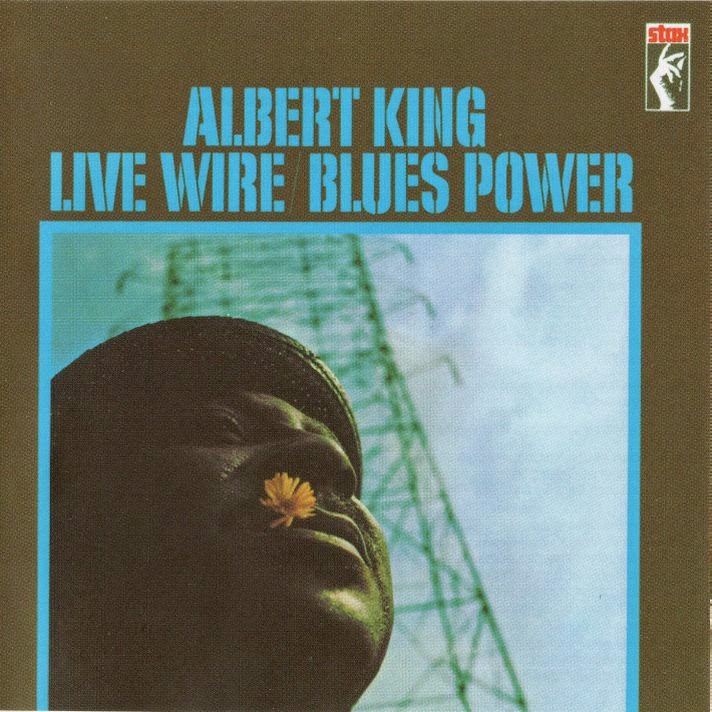 King cranked out this solid, if typical, album for the Stax label after the success of Born Under a Bad Sign. With Booker T. drummer Al Jackson producing, the set includes such staples as "You Threw Your Love on Me Too Strong," "Wrapped up in Love Again," and a powerful version of Howlin' Wolf's "Killing Floor." For fans of King's guitar work, the inclusion of the instrumental workouts on "You Don't Love Me" and "Drowning on Dry Land" are a special bonus. Not an essential Albert King album, but one of his good ones. 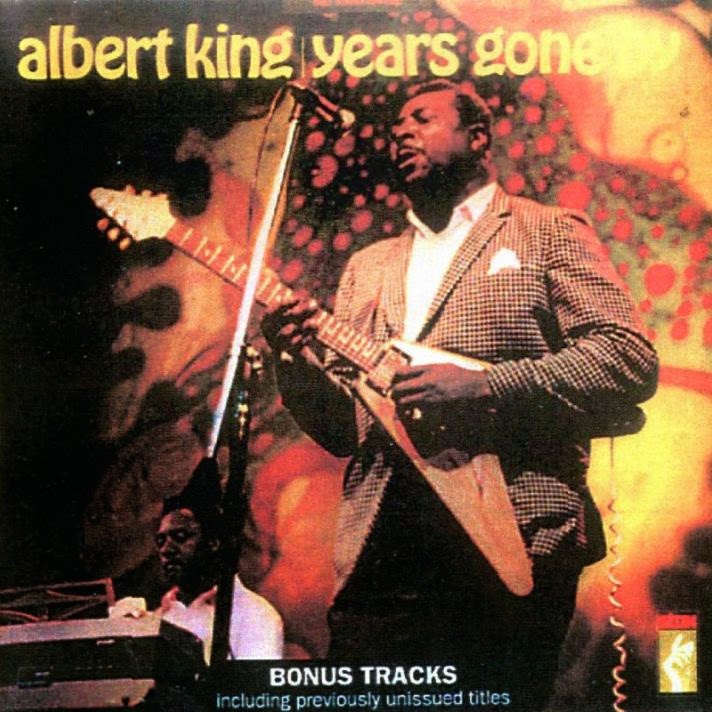 I appreciate the effort you put into this site, and I would be grateful if you re-upped Albert King in FLAC.