Hello, sorry i missed last wednesdays post, i had a bicycle accident ended up in hospital with broken collarbone and bruised ribs, a knock on the head, which followup research has me having to return, basicly im on weekend leave, so no post next wednesday either.

Therefor a bit briefer as ususal, a second batch of vinylrips from early eighties Japan, i start off with the first YMO member to appear in this context, dont worry there will be more, even when just a fraction. Joji Hiroti fills the rootsy/jazzy spot and even if he aint that new age as these days and as one might gather from the cover, latenight music. Lizard then again isnt, Japans first real new wave band which left the island to look for the vibe, recorded their first with JJBurnel (strangles) upon return they'd seen enough to produce the follow up Babylon Rocker themselves, Sandii moved from background singer to the front, great move by the looks of it, anyway she weaves some great tunes with her okinawen music brothers . The Snakeman Show great album its not necessary to understand any Japanese here just catch the drift ...

Ryuichi Sakamoto (born January 17, 1952 in Tokyo, Japan) studied at the Tokyo National University of Fine Arts and Music, where he graduated with a BA in composition, and a Master's degree with special emphasis electronic and ethnic music. Sakamoto began his career in the late 1970s, working as a composer, arranger and producer with some of Japan's most popular rock, jazz and classical artists. He released his first solo album in 1978 but came to fame as a member of Japanese synth-rock outfit Yellow Magic Orchestra with co-founders Haruomi Hosono and Yukihiro Takahashi. He collaborated with David Sylvian on a number of singles and most of Sylvian's albums. He appeared in the 1983 Nagisa Oshima film Merry Christmas, Mr Lawrence alongside British rock singer David Bowie; he also wrote the film's musical score. He won the Academy Award for his score to the 1987 Bernardo Bertolucci film The Last Emperor. He has also written soundtracks for Pedro Almodovar's film High Heels, and Oliver Stone's Wild Palms. Sakamoto was married to a Japanese pianist and singer Akiko Yano, collaborating with her on some of her recordings. He is also known as a critic of copyright law, saying it is antiquated in the information age.

Hirota was born in North Japan. At the age of eleven, he began a lifelong study of percussion and has been composing from the age of thirteen. He studied at the Kyoto City University of Arts. In 1972 he was invited by Stomu Yamashita to be the musical director and percussionist of the Red Buddha Theatre. In 1977 he became the musical director and percussionist for the Lindsay Kemp Dance Company. Hirota toured extensively throughout Europe, Mexico, Canada and the USA, South America and Japan.He has released four solo albums, "Sahasuhara", "Wheel of Fortune" "Rain Forest Dream" and "The Gate". In 1991, Lindsay Kemp Dance Company won the Time Out Award for best dance company for their production of "Onnagata" for which Hirota wrote and performed the music. 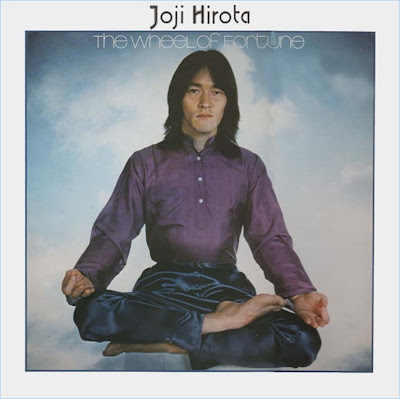 In 1979, LIZARD released the debut album with Punk sound using synths produced by Jean Jacques Burnel in Stranglers. Momoyo, a leader of the band, is the free producer of Japanese Rock scene.....

He was 17 years old. Momoyo formed the first band, named 'Electric Moth'. In 1973, They changed the name "Red Lizard". In 1978, Momo met JJ from the Stranglers, he invited us to LONDON, 1979 summer. They changed the name to "LIZARD" and went to LONDON. At that time, they had the recording for first album and have some gigs in the UK. The next year, 1980, Lizard produced their second album in  'BABYLON ROCKER'. Followed by their 3rd album'GYMNOPEDIA' Neuromantic Album a year later.

Lizard dissolved once. 1982-1987 'LIZARD' Momo worked as a project under same name.It was not a band any longer. And Momoyo was going down the underground. And Now, The Project has been reborn as the AI program in BABYLONIC STUDIO. Latest work is the sound track of 'Alexander' an animation film made in the Republic of Korea. At same time Momoyo is working as the producer of i-wave.net, i-wave.com, the next coming dual music-sites for EAST, Hongkong, Macao, Singapore, Tokyo. 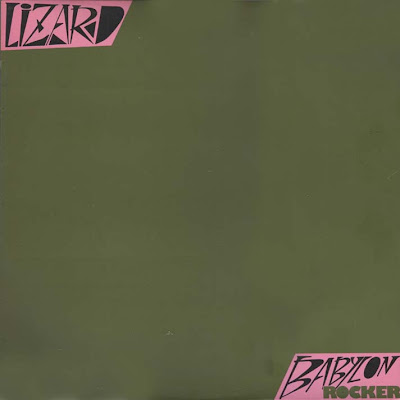 Sandii is a colorful veteran of the Japanese music business, who has gone through a number of stylistic changes over time, yet still maintained a substantial audience. Born Sandii Suzuki in Hawaii, with a mix of Japanese, Spanish and American blood, she moved to Tokyo in the early 70s and became a DJ on NHK radio. After winning a Yamaha sponsored songwriting contest in 1976, and having a solo hit single “Mystery Nile” in 1979, Sandii joined up with Yuyakegakudan, (who later became the Sunsetz), a group led by guitarist Makoto Kubota, who she later married. Kubota was an experienced musician, who had traveled extensively and picked up a variety of musical influences, including New Orleans, reggae, and various types of Asian music. Amazingly, their first gig together as a band was opening for Yellow Magic Orchestra at Budokan in 1980.

Sandii’s first album, Eating Pleasure (1980), was sung entirely in English, and received much critical attention. Her second album Heat Scale (1981), was recorded in Ibiza, Spain, and released in a total of 17 countries. Both albums were produced by Harumi Hosono of YMO. Sandii’s model-like good looks definitely helped the band draw attention, and amongst the band’s international fans were Melody Maker writer Adam Sweeting and David Bowie. Their third album, on which they became Sandii & the Sunsetz, entitled Immigrants (1982) featured guest appearances by David Sylvain , by which time they had fused Western rock and techno-pop with Japanese and Okinawan traditional elements. While trading on the striking looks of their lead vocalist, they were also creating songs of the calibre of 'Dreams Of Immigrants' (magnificently surreal backbeat rhythm track) and 'Open Sesame' (the epitome of techno-folk). Viva Lava Liva '84 on Sire was a compilation of material from Eating Pleasure, Heat Scale and Immigrants in remixed or live variants. Next came Banzai Baby '86 on EMI. 'Sticky Music' (a top ten in Australia) was revisited in French on Yen's two-disc Graduation remix and rarity anthology, a signpost to one of the singularities of her career: her ability and readiness to sing in many languages. She also duetted with Stephen Duffy on (the misnamed) 'Something Special' '86 from the film Knights And Emeralds on 10 Records. Sandii and the Sunsetz' Rhythm Chemistry '87, One Love '88 and the compilation Orientation '89 were all on EMI; there was growing disenchantment with their musical direction, not least because they were being groomed for an American audience and losing their special identity. Speaking of the process, Sandii told Mojo '95, 'We just couldn't put our minds together to go in that direction but we tried anyway. It didn't work out.' The group disbanded; 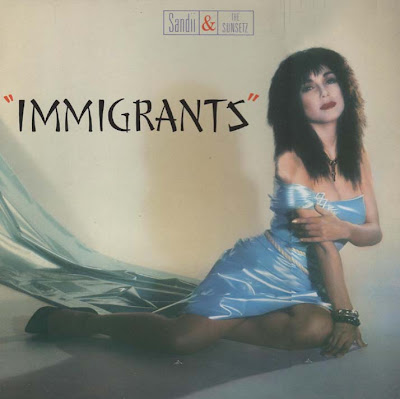 Snakeman Show is originally a radio program (Raido Osaka -> TBS) and it broke out among New Wave boys and girls with the insertion to Y.M.O.'s mini 25 cm album "Multiplies". This was an outstanding work by betraying the expectation of ordinary people as a plan after a major hit of "Solid State Survivor". It made Masato Eve who was a voice actor for the President Deathler and Katsuya Kobayashi who is a master of English very major thanks to Moichi Kuwahara as a brain.
About how Snakeman Show started... Moichi Kuwahara was deeply inclined to the movie "American Graphity" released in the early 70's which Wolfman Jack appears while working the Japanese edition of "Rolling Stone", an American counter-culture magazine. Katsuya Kobayashi was producing the BGM for the bar "Scotch Bank" run by VAN, men's clothing brand leveraging the mimic of Wolfman Jack. Kuwahara was so impressed by Kobayashi's mimic and Kuwahara asked Katsuya Kobayashi to be a main personality of the radio show which started after discontinuing "Rolling Stone". Kuwahara was exploring the program which can inspire the imagination by creating an imaginary character (admiring Wolfman), and Kuwahara convinced Mr. Kobyashi to call Snakeman Show by Snakeman, not Katsuya Kobayashi, as he happens to be born in the year of snake.
The Pithecan Thropus Erectus Strike Back album came about in collaboration with the x Plastics members who went ahead as Melon, recorded at the Pithecan club. 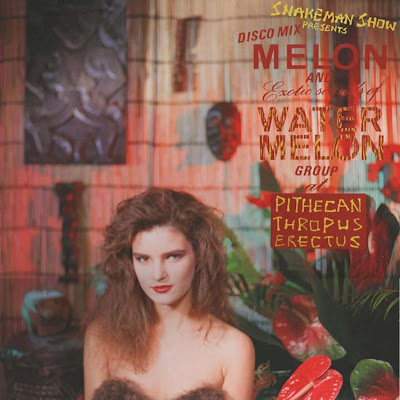 thank you and get well

I hope you heal quickly. Thanks much for all the great sounds - one of my favorite music blogs.

And still posting! damn you must be a music lover typing with broken ribs and all!@ thnks for the effort, get well soon. :P

Sorry to hear about your accident. And thanks for some great Japanese records. If you're still having trouble with deleters you may want to check out www.sharebee.com--they'll post your links to multiple servers & fix links that go down by reposting.

I have the album by Sandii & the Sunsetz which I bought back in '82 and enjoyed a lot. Had no idea who they were so very interesting to finally get some info. Much appreciated!

Thank you, I have Wheel of Fortune on vinyl and Sahasurara--do you have Sahasurara on CD/mp3?

Hello Model 001, Hope you like the album, don't know if its the same compilation but there's one track by Lizard on the excellent Tokyo Mobile Music I, you'll find at the 7th of april post(Japan I) here.

I just loved this Lizard album!*_*

By the way, do you know the lyrics of "Baby Hit Yourself"?

Me and my band want to cover this song so bad

I looked everywhere but I could only find the first verse :S

This is so awesome! Especially since the links still work! Thank you so much for uploading all this!

Thank you for exposing me to so much fantastic, unique and under heard music.

Is it possible to re-up Ryuichi Sakamoto's Left Handed Dream.

My apologies ... I see that you already have re-upped it.

Hello Rho,
could you reupload Sandii & The Sunsetz - Immigrants?
Thank you very much!

Could you please re-up this set.
Thanks. Cheers!

Hi Rho. Can i request a re-up of Sandii & The Sunsetz please. :)

Another kind reup request please, for Sandii & the Sunsetz and Ryuichi Sakamoto.

Hey Rho I"m still playing catch up on your great blog. Thanx for the Sanddi and The Sunsetzand the Sakamoto! Cheers.