Hello, as regular visitors you know what to expect....some more Fila Brazillia but not their own work but their musical vision which impressed lot's of people and did all manor of good to Fila Brazila's musical status.


Today's Artists are Hull-based duo Fila Brazillia is the most popular and acclaimed of the noted Pork Recordings stable. Formed in 1990 by producers Steve Cobby and Dave McSherry, Fila followed Cobby's association with Ashley & Jackson, a moderately successful pop/dance group signed to Big Life! that went belly up as the label began demanding more and more pop and less dance. Returning to his native Hull from Manchester, Cobby met DJ/dabbler Dave Pork, and the two forged a creative alliance. Hooking up with McSherry to form Fila, the group's first 12", "The Mermaid," was released that same year on Pork's fledgling imprint (formed, actually, specifically for the occasion), gaining instant acclaim among DJs and headphonauts alike for its innovative fusion of funk, dub, house, hip-hop, and acid jazz.........N Joy

Fila Brazillia followed their debut single with a string of full-length releases (Old Codes, New Chaos, Maim That Tune, and Black Market Gardening among them), which were instrumental in building Pork's reputation as one of the most consistent and respected of England's vast ocean of underground breakbeat/trip-hop labels. Later releases integrated elements of pop and drum'n'bass on a number of tracks. Fila's rep also translated into a number of acclaimed remixes, including Lamb's "Cotton Wool," the Orb's "Toxygene," and DJ Food's "Freedom" (over a dozen of which were featured on the 2000 collection Brazilification). During the new millennium, the duo released the mix album Another Late Night in 2001 and the studio effort Jump Leads early the following year. After two years of recording inactivity, in 2004 the duo released a pair of production albums (The Life and Times of Phoebus Brumal and Dicks), plus another mix album (Another Fine Mess). In addition to Fila, Cobby is also an active member of other Pork stable acts such as Solid Doctor (his solo guise) and Heights of Abraham, both of which have released a number of full-length recordings.

Their early albums were released on Pork Recordings, also based in Hull: Old Codes New Chaos, Maim That Tune, Mess, Black Market Gardening, Luck Be a Weirdo Tonight and Power Clown. After creating their own music label with Sim Lister, Twentythree Records, they released further albums A Touch of Cloth, Jump Leads, The Life And Times of Phoebus Brumal, Dicks and Retrospective. They have also released two DJ mix albums, Another Late Night: Fila Brazillia, for Azuli Records' "Another Late Night" series, and Another Fine Mess: Fila Brazillia, and two collections of remixes: Brazilification and B2.

Their collaborations include working with Harold Budd and Bill Nelson to release Three White Roses & A Budd (Twentythree Records, 2002). They co-produced the first Twilight Singers LP Twilight as Played by The Twilight Singers with Greg Dulli in 2001. Cobby and McSherry have produced more than 70 remixes for artists including Black Uhuru, Busta Rhymes, DJ Food, Lamb, Radiohead and The Orb. Bill Hicks, the controversial American stand-up comedian, satirist and social critic, "appears" on Fila Brazillia's album Maim That Tune (1996) and the album is dedicated to Hicks.

Their music has made its mark both on small-screen blockbusters (such as CSI and Sex and the City) and cult cinema films such as Dogtown and Z-Boys, Riding Giants and Once in a Lifetime: The Extraordinary Story of the New York Cosmos, a 2006 documentary about the New York Cosmos soccer team. One of their better-known songs, A Zed and two L's, appears on Jam, a black comedy sketch show by British satirist Chris Morris. Their song "Here Comes Pissy Willy" from the Power Clown album featured as the theme to the James Whale Show on Talk Radio in the late 1990s.

After releasing their Retrospective album in 2006, Cobby and McSherry quietly ended their longtime partnership. Currently, McSherry is a lecturer in Audio Production at the University of Lincoln.

In 2013 Steve Cobby provided the soundtrack for the Hull 'UK City of Culture 2017' bid film - 'This City Belongs to Everyone', produced by Nova Studios - on 20 November 2013 Kingston upon Hull, East Riding of Yorkshire, was announced as the winning City, and so as UK City of Culture 2017.

Just like Kruder & Dorfmeister's excellent K&D Sessions, Fila Brazillia's Brazilification is a continuous-mix set of down-tempo remixes spanning two discs, and it's just as stellar a compilation of material, too. Though Fila Brazillia doesn't quite have the reputation on the decks, like K&D they'd been not only one of the busiest remixing teams during the late '90s but also one of the best. Freed from the "serious" art of long-form recordings and given a focus by the originals (many of which are pop songs by alternative bands), Cobby and McSherry sound even better here than on their albums (where frequent genre excursions and long jams occasionally make for rather bland trip-hop). As you'd expect from the cover photo, which shows the anoraked pair larking about on a hillside, the duo knows how to have fun as well; they toy with their vocoders to give a hilarious canary-in-a-ring-modulator effect to the vocals of Moloko's Roisin Murphy on their remix of "Lotus Eaters." Though many of the best remixes come on the first disc (Radiohead's "Climbing up the Walls," U.N.K.L.E.'s "Berry Meditation," the Orb's "Toxygene"), one of Brazillia's best moments on wax -- the alternately blissful and drum-heavy rework of Lamb's "Cottonwool" -- finally appears late on the second disc. For those too busy to track down remixes, Brazilification is not only a perfect complement to the Pork Recordings pair but a worthy introduction. 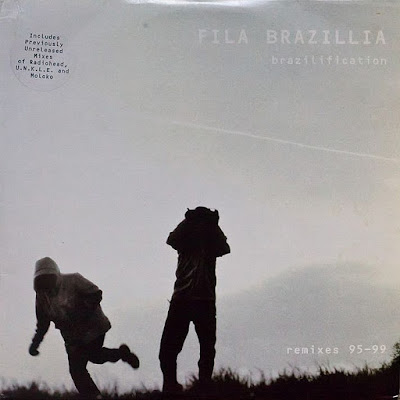 Fila Brazillia’s second collection of remixes, B2, continues to show off their dynamic range and variety, from the ambient groove of Jose Padilla’s “Who Do You Love?” to the straight up house on Beef Wellington’s “Slightly Elevated,” dub on The Truth’s “Truth Theme,” and breaks on Razor’s “Doppelganger.” And even though all the really superb remixes made their way to Brazilification, this collection nonetheless holds its own, like with their funky version of Cal Tjader’s “Soul Sauce” or the smooth “How Jazz Is It?” from Hoodrum. The boys even manage to jazzify Sven Vath’s “Fusion.” On the second disc, they send Radio Zumbido’s “Livingston Buzz” right to the dancefloor, while Jaffa’s “Elevator” and Soulstice’s “Wind” head for the lounge. Those tracks make up for the weaker track selection (Ben Christophers’ “Leaving My Sorrow Behind,” for instance), and, certainly, Unitone’s “Dag Nabbit” leaves the middling tracks in the dust. The disc ends with Tosca’s “Fuck Dub,” which cements their downtempo credibility. Not that there was ever any question...... the dreary streets of their Hull hometown have been brightened by the Balearic sunshine Steve Cobby and Dave McSherry have been brewing, amidst the alchemical hubble-bubble of their studio 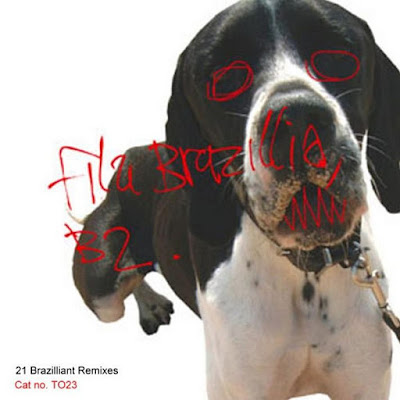 Fila Brazillia’s party looks like being a messy Humberside affair, as the Hull boys’ selection for the setlist raises an eyebrow or two. It’s a refreshing change to see them given an uptempo compilation mix rather than more chill-out stuff, and goes to prove their versatility.There’s a strongly Brazilian flavour at the start of this particular mess, and once the opening trio passes through Xavier Cugat, Bushy and Pepe Deluxe the scene is set. Grand Popo FC’s brilliantly titled ‘Men Are Not Nice Guys’ (not true of course) moves into a full-on carnival tune, Heiro’s ‘Ligeirin’, guaranteed to brighten any day. Swiftly replaced by the nagging hook of Jolly Music’s ‘Talco Uno’, via Tiefschwarz, the setlist veers again to Ewan Pearson’s quality retake of Goldfrapp’s ‘Strict Machine’. Can’t get any more varied? Wrong! Now it’s time for Yello and Killing Joke, a great idea in practice but a bit unsettling given what’s gone before. Presumably the idea is you’ll be wrapped up in the mix and beyond caring at this point! So it’s left to 12” Superstar, Tutto Matto and Mense Reents to close out. A mix, then, that fully reflects the personality of its authors, and at least looks to do things a little differently, introducing a few new names and hitting the party button first shot. 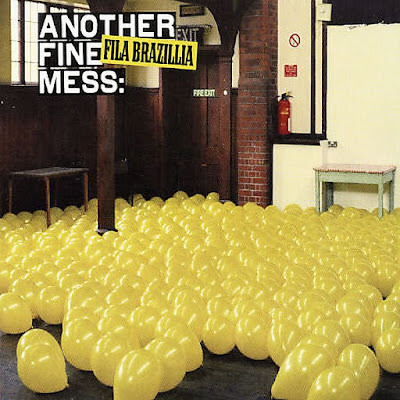 Thanks! For FB completists, check out this extra track, Bulls Dozing (flac), from the Freezone 3 compilation in 1996.