Japan V and were still in the early eighties and on vinyl, that is apart from Yani, this is a rip from a cd John Zorn compiled from Akiko's mid eighties work, Logic System showed that programming moogs and synths does have a creative part. Susan's short music career was cut short by war and not to forget the full schedule of her backing band YMO, whose members were releasing solowork everyyear aswell. What me Worry being the result of Takahashi working a lot with befriended british popstars resulted in an almost british electro pop album. Yen records commemmorated itself with a fine sampler and founder Kunihiko Murai with a special 12 " track God Be With Us Till We Meet Again. As an off bonus a soundphile A drumbattle in Highest Fi of the day

Logic System is a musical project of Hideki Matsutakem he started as an assistant for Isao Tomita in the 70's and is well-known as the sequencer programmer and modular synthesizer operator for the Yellow Magic Orchestra (YMO), but he wasn't a member of YMO. He worked on several of their albums and toured with his huge collection of synths. He also did sequencing work for numerous technopop albums for other artists, particularily in the early 80's. In 1996 he performed in a big concert event organized by Isao Tomita and was also guest on Towa Tei albums. On his website is a huge number of MIDI files he released, with some of YMO's original songs. He released 3 albums under the moniker Logic System, Logic, Venus and Orient Express. 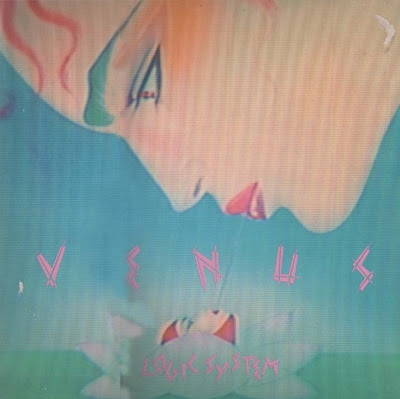 Susan was born Susan Nozaki in Japan, her mother was Japanese, her father a US serviceman with French ancestry. She has starred in musicals and presented TV shows, made many appearances in commercials and is now re-establishing herself as a performer of techno-pop music. Susan has recently made links with young fashion designers in Japan and she is working to popularise the Japanese Gothic Lolita style in a more sophisticated way. Her music is technopop in style, mainly featuring synthesisers and drum machines. n 1980, Yukihiro Takahashi from the Yellow Magic Orchestra met Susan at a TV studio and was impressed by her energetic personality. This led to her re-launching her career as a pop singer. Yukihiro and Susan collaborated with co-producer Kenji Omura on an album “Do You Believe In Mazik? The album featured all three YMO members (Haruomi Hosono, Ryuichi Sakamoto and Takahashi), Kenji Omura, Makoto Kubota (Sandii & The Sunsetz) and Hajime Tachibana (The Plastics)

By 1981 it was decided to launch Susan in Europe. She took part in a campaign alongside Ippu-Do, Sandii & The Sunsetz and YMO to promote Japanese pop music in the West. The same year Susan recorded her second album with the YMO members, called “The Girl Can't Help It”. This time, guest musicians included Masami Tsuchiya (Ippu-Do/Japan), Shigeru Umebayashi and Sandii. The material on this album uses a mixture of styles. A big launch event was planned for Susan in the UK in early 1982. Various TV appearances that had been arranged and a single version of “I Only Go Out At Night” was released. Unfortunately, this coincided with the outbreak of hostilities between the UK and Argentina over the Falkland Islands and so her trip was cancelled. Next year she married a member of the Rokkets, got pregnant and well family life.. Meanwhile 2007 she's back performing and recording aswell as working in fashion. 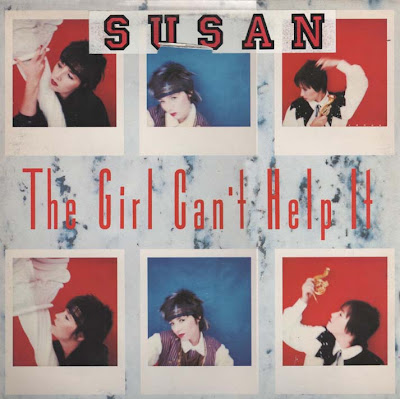 YEN Records existed from 1982 to 1985. Hosono and Takahashi had a great deal of creative input on just about all of them. It was an imprint of Alfa so sometimes people identify Alfa material erroneously as YEN. During those years they released well over 30 albums and 16 singles (depends on how you count). Nearly all of the albums are superb and worthwhile. In 1993 Alfa Records apparently went bankrupt and was purchased outright by Toshiba EMI. They issued the landmark and now out of print YEN BOX collections and kept some material in print. They also reissued many new best of collections with no unique material.

When Yen Records founder Kunihiko Murai died, all Yen artists participated in this album or remixes and an original 12". Takahashi and Hosono produced album consisting of-- a 12" with (writers in parenthesis parenthesis) God Be With You Till We Meet Again and an album 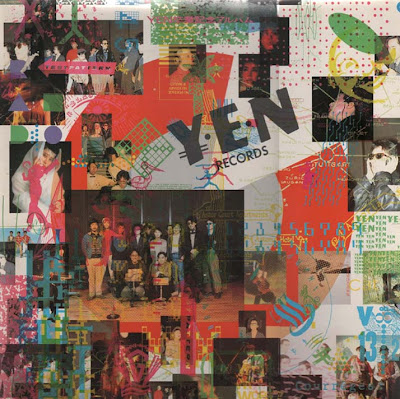 Born Akiko Suzuki in 1955, (Tokyo, Japan), Akiko Yano studied jazz piano in high school and recorded her first album, Japanese Girl, in 1976. To the familiar wispy, girlish voice of Japanese idoru, Yano added something different: a whimsical sense of mischief and the ability to simultaneously sing and improvise on the piano. Japanese Girl caused a sensation in the Japanese music scene, with Yano standing out from the J-pop scene of the time as something entirely original and different. After a failed marriage to Makoto Yano, the producer of Japanese Girl, she went on to become the wife and musical partner of Ryuichi Sakamoto, soundtrack auteur and former member of legendary '80s Yellow Magic Orchestra. The partnership saw Yano join YMO on tour worldwide in the early '80s as support keyboardist, and she began to cultivate her own following in the US. Little Feat supported her on the West Coast, and she also participated in recordings with UK rock band Japan, led by David Sylvian (who still writes songs with Sakamoto), and Thomas Dolby. Separating from Sakamoto, she moved to New York in the '90s, where she now gigs regularly and records with a range of musicians, mostly in the jazz field.

Another Takahashi album, unfortunately i dont have his first "Saravah "(78) produced by Sakamoto , one which would fit nicely in the YMO history. Next time I will post the 2 other solo albums by Sakamoto and Hosono that were released that year and which laid the groundwork for the emergence of YMO. More on that in my next post.
Meanwhile here we have Yukihiro sounding very british eighties , clearly the title inspired to do what he liked and not to live up to others expectations. This being his 4 th solo album, with another 20 or so that followed to date, Hiro almost keeping up with Hosono output wise.

This is a bonus, a bit out of the regular musical context, however it is an example how the Japanese tried to achieve the highest sound quality sound onto vinyl, their pressings already had a high status this album is a socalled direct master cut, no inbetween tape adding distortion limiting seperation etc, so the cymbals crash and the snares snap . All this suits the jazz format , live cutting in the studio. Well something for the freaks i guess, as it aint very long and in line with the drive for best audioquality i upped the grade to ogg-9 here . 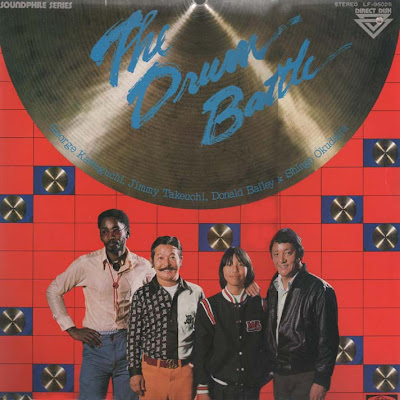 Rho,
Thank you so much for Susan. You make me a very happy person.

good to have this stuff in vinyl rip form too, some of the CD issues of these albums do not sound very good.

Thats alright Eric , Anonymous, yes specially some of the eighties cd issues can be very poor. I use a dual player with a stanton element, an audigy 2 soundcard and soundforge 4.0 - basicly to normalise and descratch. The result amazes myself from time to time, sure after compressing stuff gets lost again, but i dont use OGG for nothing, its the best available compromise.

Rho,
Thanks for all this Japanese music - I'm familiar with most of the YMO albums as I was a big fan of theirs back in the 80s (and still am) but it's good to be able to hear some of the other projects they've been involved in. I also have the first Logic System record, so good to be able to hear the second one! It's a shame that the "Xoo Multiplies" tracks didn't form part of a "proper" album as they're among my favourite YMO tracks (the original "Multiplies" tracks are Nice Age, Tighten Up, Citizens of Science, Multiplies and The End of Asia). The "Snakeman Show" tracks do get annoying after a while (one of them is also either very tongue in cheek or very offensive!) so the European version of "Multiplies" is probably the best place to hear them - in fact for those who don't know YMO this album is an excellent place to start. Finally I love the "Multiplies" cover!
Thanks!
Newelectricmuse

People forget how deep and diverse J-Pop really is. It has a historical context every bit as rich as anything else out there including U.S. pop.
http://www.writingup.com/blog/Radicalpatriot

Great selection!
I have been seraching for Logic System's first Logic album. Can Newelectricmuse or anyone make it available here?

Here's Logic System's first album(320 kbps)http://rapidshare.com/files/143412491/Logic.rar
now does anyone have Susan's first
album or the two disc compilation"Complete Susan" been lookin everywhere for that

Your Yen Memorial upload is maybe my best discovery in the net (and I search a lot), so big thanks. That compilation is a rare gem.

If you know of more stuff made by Koji Ueno, Kehiichi Ohta, or new versions of Jun Togawa's work (like the superb ones in the compilation), then you would make me even happier: rcllo2000@yahoo.ca

btw, in my blog you can find some stuff also :)

Thank you for sharing the Yen Memorial Album! Lots of rare gems to be found from Ueno, Togawa, etc. Also, I was plesantly surprised to see you encoded in OGG/Vorbis rather than mp3. Nice!

The link appears to be dead for Yen Memorial Album, could you please re-post? I'd love to get a copy of this album! Thanks

Yes i can Yen Artists have been re-upped. N'Joy

What about Susan? Could this be re-upped? It is nowhere to be found elsewhere online. Thanks!

Thank you very much for everything you have done. Amazing stuff.

On top of Susan, Joji Hirota Wheel of Fortune is gone as well. Could you please re-up both of these?

I had to come back to thank you again for these 2. you got so many gems on here. Its mind boggling.

I really hate to do this, but could you please re-up the Plastics-Welcome Back lp? (like I said, so many gems)

Hello Sharp well i just re-upped the Plastics, unfortunately at the time i couldn't save my vinylrips lossless and kept to my regime of Ogg 7- could easily been ogg 9 here. Anyway at the time uploading anything larger then 100 mb was expensive. How times have changed

Hi Rho,
could you update the links to Yukihiro Takahashi - What, Me Worry? No Way! Thanks and happy christmas shopping days.
winston

Thanks so much for the reposts here!

Hello, the link for Susan's The Girl Can't Help It expired, could you reupload it again? Thank you so much.

Thanks for these re-posts, Rho! Is there any chance of posting Susan - "The Girl Can't Help It" in flac?

Hello can you reupload Yukihiro Takahashi's "What, Me Worry?" Thank you a ton, friend! 🤙

Hello,
Great site. Would a new link for Yukihiro Takahashi's "What, Me Worry?" be possible.
Thank you